Don’t Ever Forget is the first book in Matthew Farrell’s Adler & Dwyer series. His fans will recognize the main character, police investigator Susan Adler, from his previous novels, but this one can be read as a standalone. The roadside murder of a state trooper plunges Susan into a chilling, complicated case. She turns to her friend and forensic investigator, Liam Dwyer, for help and together they try to stay one step ahead of a killer whose body count is only increasing. Full of twists, this page turner will keep you guessing until the very end. I’m so pleased to chat with Matthew Farrell today on BCB. Welcome, Matt!

Tabitha Lord: Can you tell us a little about yourself? Are you a full-time author or do have another profession as well?

Matthew Farrell: I grew up in Peekskill, NY, lived in Philadelphia for six years and have now lived in Northern Westchester County, NY for the past 20 years. I’ve used both Philadelphia and Westchester County / the Hudson Valley as the backdrops of my books because they hold such a special place in my heart. The Hudson Valley has some of the most beautiful scenery and small little towns and the stunning Hudson River, and I like to add a dash of murder to such a bucolic area. I think the juxtaposition of those two things makes for an intriguing thriller.

I’m married with two daughters, 15 and 19.  They think it’s cool that their dad has sold his books around the world, but what they really want is to walk the red carpet at a movie premiere of one of my books (holding breath here…).  I work as a Commercial Lender for a bank by day and murder people in fun and mysterious ways by night.

TL: The police procedural side of this book felt very authentic. How much and what kind of research did this project require? 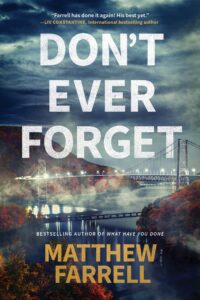 MF: My father is a retired police officer, so I’ve grown up in a police family and am familiar with how officers work both on and off shift. I’ve also grown up with my father’s friends, so I have a network of officers in all different chains of command I can reach out to. I also have personal friends who I grew up with who currently work for the New York State Police and the NYPD, so I’m always picking their brains as well. Everyone has been very supportive and willing to answer all kinds of questions during all hours of the day and night. I’m very thankful to have such a circle of support as the procedural aspects of my books are important.

TL: With such a complicated plot, did you have the ending worked out before you began, or did the pieces fall into place while you were writing?

MF: I’m, what they call in the industry, a pantser, meaning that I write by the seat of my pants. I don’t plot and often don’t have more than the beginning and general idea of where I think I want the story to go before I start writing. That being said, I always start out with what I think the ending will be, and by the time a reader is reading the finished book, that ending has probably changed two or three times. For Don’t Ever Forget, my ending changed twice and my killer changed three times. During the editing process you often fix one thing that requires you to fix two other things, or fixing one thing gives you the opportunity to change something else for the better. My books tend to go through six rounds of edits from first draft to finished product, so nothing ever falls into place the first time, but for me, finding the right balance that makes everything fit is all part of the fun.

TL: In this novel, the suspected killer is given quite a lot of page-time right along with the good guy, or gal in this case. Can you talk about why you chose to structure the narrative this way?

MF: I love to keep the reader guessing as much as I can. In order for me to pull that off, I like to let the reader into the minds of both my protagonist and antagonist. I love allowing them to learn little things here and there that ultimately build into a motive or twist or surprise. The more my readers have multiple points of view from different characters, the greater the surprise when it comes. Something meaningless and mundane on page 57 can be part of the linchpin of the entire case on page 340. When that mundane thing is seen in both points of view, the payoff at the end is that much more exciting.

TL: The characters in Don’t Ever Forget have been featured in your previous books, yet this is a standalone, easily read out of order. Will these characters be featured in future books?

MF: Yes. Don’t Ever Forget is actually Book #1 in my new Adler & Dwyer series.  Book #2 in the series Tell Me the Truth comes out June 2021 and I plan to continue the series as long as readers are interested in reading about Susan and Liam.  Each book will feature a standalone investigation and can be read out of order, but the best way to learn about the little things that are mentioned as background in each book would be to start with What Have You Done, then I Know Everything and then kick off the series with Don’t Ever Forget.

TL: Let’s talk about your writing process a bit. Do you have a set time to work? A particular space? Do you write every day?

MF: Once I start a new novel, I write every day with the exception of major holidays like Thanksgiving, Christmas, etc.  During the week I write each night from 6:30 – 8:00 and on the weekends I write in the morning from 9:00 – 1:00. I have a desk in my bedroom where I write and have also been known to take the laptop out on the deck near the pool should the mood strike.  Noise-canceling headphones allow me to write in silence, which I need. I can’t write with music or noise. Other than that, I put my head down and get that story out. For me, the first draft is always the hardest and the editing is the fun part. But once that initial version of the story is down, no matter how much work I think it might need, at least that first draft is done.

MF: I’m going through the final rounds of edits for the next Adler & Dwyer thriller Tell Me the Truth (June 2021) and heading into a huge second round edit of a project that will remain nameless for now. I’m so grateful for my readers who keep coming back for the next adventure.  As long as they’re out there reading, I’ll be in here writing.

TL: Thank you so much, Matthew, and good luck with your next project!

Matthew Farrell lives just outside of New York City in the Hudson Valley with his wife and two daughters. Get caught up on the progress of his next thriller along with his general musings by following him on Twitter @mfarrellwriter or liking his page on Facebook: www.facebook.com/mfarrellwriter2.