When a meteorite hits off the east coast of the United States, world-wide devastation follows. Once the immediate emergency is managed, scientists quickly realize that although the strike didn’t initially destroy the planet, it was, in fact, an extinction level event. Predictions indicate Earth will be uninhabitable in just a few generations. The space program kicks into high gear with single-minded focus – we’ve got to get off our home world and colonize elsewhere!

1950’s gender roles create frustration for protagonist Elma York. A WASP pilot during WWII, now a mathematician crunching numbers for the space program (think Hidden Figures), Elma is more than qualified to go to space and is willing to do what it takes to get there.

When The Calculating Stars, first book in the Lady Astronaut series, won a well-deserved Hugo award this past summer, I knew I had to read it. In fact, I chose it as my own book club selection, and my widely-read, discerning pals raved about it. From our book club to yours, we enthusiastically recommend these books! 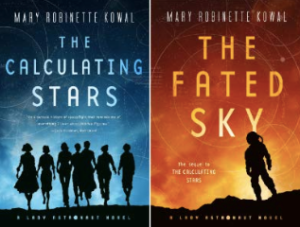