After causing a tragic accident that kills her friend, Hannah is besieged by not only abject guilt, but also terrifying images and events that make her think she’s losing her mind. As her life spins out of control, she fights to hang onto reality and conquer the unknown terror that won’t let her go. An intense, YA thriller, Unlocked blends elements of mind control, psychopathology, and the occult. Book Club Babble is pleased to interview its author, Margo Kelly.

Kate Newton: Thanks for taking the time to chat with us, Margo. Can you tell us a little about your writing career and how you settled on writing in the YA genre?

Margo Kelly: I’ve always been an avid reader, and I especially love thrillers from authors such as Dean Koontz and Stephen King. I also enjoy reading about teens struggling to figure out the intricacies of life and relationships and independence. As an author, it’s been my goal to bring these two worlds together—the intricate story structure of a thriller and the intricate character structure of a teen protagonist. And that is how I ended up writing thrillers for the young adult audience. 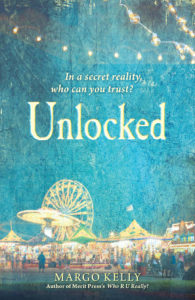 KN: Unlocked is a very complex story. Following a fateful night at a local fair, Hannah becomes terrorized by an unknown force. You had this reader, at least, guessing until the very end. How did you develop the idea for the plot?

MK: I’m delighted to hear that the story had you guessing until the very end. The plot idea began back when I was in college and attended my first hypnotism show.

In an auditorium along with a couple hundred other students, I watched as fifteen guys and girls went on stage and participated in the show. The audience laughed and clapped and hooted when the hypnotized students did ridiculous things such as quack like ducks or sing like rock stars. It was great. Terrific. Until the end.

While the participants were still completely hypnotized, the hypnotist turned to the audience and spouted his political views. He didn’t even try to hide what he was doing. He spoke clearly and abruptly. The people to my left and to my right sat in shock. My own mouth dropped open in disbelief. The hypnotist went so far as to tell everyone exactly how to vote in the upcoming election. I was dumbfounded. I felt like my trust had been violated, and I wasn’t even on the stage. I was not hypnotized. I was not in any sort of suggestive state. But those students in the show still were. And I bet there were plenty of others sitting in the audience who were impressionable from watching the hypnosis being performed.

That’s the exact moment when I decided I would never willingly take part in hypnosis. Sure, that was an isolated incident. Some hypnotists are trustworthy. But not all. Some do not have a very high ethical code. And because of that, to this day, I hate giving up control to anyone, under any circumstances.

I’ve never forgotten that college night, and it inspired my novel, UNLOCKED.

KN: That’s an amazing story. A hypnotist came to my college as well, and there were similar antics, but nothing like what you described!

Now, let’s talk about the art of story-telling. Crafting a suspenseful story is challenging for most writers. You can’t reveal too little or readers lose interest. But if you give too much away, the “twist” becomes obvious. It’s kind of a fine line. How did you develop the craft of writing suspense?

MK: It is a fine line. As the author, I know the entire story, inside and out. UNLOCKED became complicated to draft because Hannah is an unreliable narrator. So not only did I need to control the release of information to the reader, I also had to control the misinformation coming from Hannah’s perspective. One way I continue to improve myself as a writer is by reading books on the craft of writing. I especially love David Baboulene’s THE STORY BOOK in which he discusses the concept of a knowledge gap. Here’s a snippet: “Sometimes the audience has more knowledge than the protagonist, sometimes less. Sometimes the audience has the same knowledge as the protagonist, but less or more than another player. … In a good story there is always, always a difference in the knowledge possessed by at least one participant when compared to the audience.” (For more information: //www.margokelly.net/2012/04/knowledge-gaps.html )

KN: Thanks for suggesting that resource. Our readers will appreciate it.

What transpires at the fair forever alters Hannah’s life, including her social circle. Soon she has a whole new set of friends, yet she longs to have her old friends back, even those who are treating her badly. This is almost a uniquely teen phenomenon—somewhat common, in fact, in the social stratosphere of high school girls. Did you find getting into the mind of a teenager to be a challenge, or did it come naturally?

MK: Writing is a challenge. Getting into the mindset of another person is an enlightening experiment, and I love it. The key to making it believable is focusing on the emotion. While I may have never been in the specific fictive experience I am depicting, I am familiar with the emotion attached to it. I think back to a time when I experienced that emotion deeply. Then I translate those feelings to the fictional character who is in a different situation. It’s not a natural process, but it is fascinating. 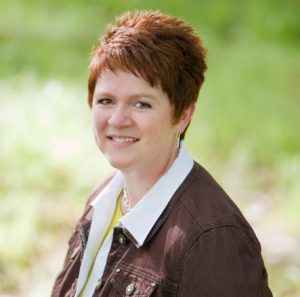 KN: When Hannah is asked why she’s with Manny, she thinks to herself that among other things, he reminds her of her father. They had a complex relationship. Can you expand upon that?

KN: There are several characters in the story, yet each is distinct. It can be challenging for writers to develop a large cast in a way that readers can keep them straight. Did you use any specific techniques to make each of the characters uniquely memorable?

MK: Yes, I use detailed character profiles with the goal of creating an assorted and balanced cast of characters. Secondary characters must earn their spot in the manuscript; otherwise they’re taking up unnecessary space, and most likely, they’re forgettable. I use the following fifteen questions to help me determine if every single character is necessary in a story. It’s a lot of extra work, but it’s worth it in the end:

By utilizing these questions, secondary characters will have more depth and importance in the story.

KN: These are great tips for writers to keep in mind, thanks!

At the beginning of the story, Plug’s motives are unclear. He seems benevolent, but is he? Did you intend to make him ambiguous, or is that just this reader’s impression?

MK: My goal when writing is to allow enough space in the narrative for the reader to envision the story in his or her own way. I want to guide the reader in a certain direction but allow leeway for creative interpretation. Yes, I made Plug ambiguous at the beginning because I wanted the reader to wonder if he was a good guy or a bad guy.

KN: You divided the story into four books, Chaos, Authority, Skepticism, and Belief. Did that come naturally as part of the writing process, or was that part of your original plan?

MK: It was part of my original plotting.

KN: The book covers a short span of time, little more than a week, yet Hannah grows exponentially as a character. Can you describe that growth?

MK: Sometimes we grow the most while under extreme pressure. How we respond to the trials in our lives help determine the type of people we will be from that point forward. There’s an old saying attributed to Franklin D. Roosevelt, “A smooth sea never made a skilled sailor.” UNLOCKED was certainly a rough sea for Hannah.

KN: When the truth comes out, Hannah’s adversary is not someone that anyone would’ve suspected. What is this person trying to achieve, ultimately?

KN: Do you intend to keep writing in the YA genre? Have you ever thought of expanding into other genres? And lastly, do you have any new books in the works?

MK: Yes, I intend to keep writing for the young adult audience. And yes, I have thought of crossing over into other areas. I have a million stories waiting inside, wanting to be written. I am working on new projects … I simply need more hours in the day to write and fingers that can type faster!

A veteran public speaker, Margo Kelly is a Northwest native and resides in Idaho. Her debut novel, WHO R U REALLY, was published in 2014. She welcomes opportunities to speak to library groups, youth groups, and books clubs.