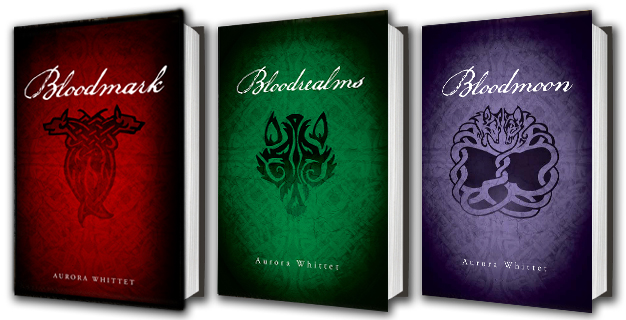 I am a huge fan of fantasy. A good fantasy novel describes stunning worlds and paints a vivid picture in my imagination. It creates memorable characters and launches them on epic adventures. I lose myself in fantasy. Today I have the pleasure of chatting with young adult fantasy author, Aurora Whittet. Aurora’s Bloodmark trilogy will be complete this March with the release of the final installment, Bloodmoon. Rich with imagery and packed with adventure, the Bloodmark saga follows a young werewolf princess, Ashling Boru, as she comes of age, finds love, and fulfills her destiny. You can follow Aurora on Twitter, Facebook, and Instagram.

Tabitha Lord: Aurora, thanks so much for stopping by BCB today. A writer myself, I am nonetheless amazed by the expansive imagination of other writers! Your story is no exception. How and when did the seed of Ashling’s tale bloom into a series of novels?

Aurora Whittet: When my mom was diagnosed with cancer, and given a death sentence, I knew I had to start doing what I wanted today, because tomorrow is not promised. I had a vision of a scene from the third book in the series. I saw Ashling. I heard what she said and I knew how important it was. So I started writing.

Tabitha Lord: I’m always interested in a writer’s process. Did you outline the entire Bloodmark series before beginning the first installment, or did the story unfold while you were writing it?

Aurora Whittet: I outlined book one (Bloodmark) in detail and books two and three roughly. I knew the major scenes and major things I wanted said. Once I wrote book one and started the publishing process, I went back and added more detail to the outlines for two and three before I began writing again. Things did get tweaked and changed as I went along, but I knew the major purpose of the series and I knew how it would end. This helped the stories flow together, and allowed me to do some foreshadowing in Bloodmark for things to come in the later books.

Tabitha Lord: Rich world building is a hallmark of the series. Can you talk a little bit about how real world research and imagination intersect, from the castles of Ireland to the mythical world of the Bloodrealms?

Aurora Whittet: Before I ever started truly writing Bloodmark, I spent three years doing research, character development, and outlines. I researched Celtic, Norse and Greek mythology, world religions, and red hair legends. I researched actual castles and places that tied the story back to history. Then, the fun part was messing it all up! I took pieces from the things I learned and twisted them into the world I wanted to create.

My two favorite authors are J.R.R. Tolkien and Jane Austen – two vastly different world builders, and I think you can see hints of both their styles in my world. The story contains a love deeper than the ocean, silly etiquette rules, teenage bliss, and a darkness that makes your skin clammy. I love that juxtaposition.

Tabitha Lord: Why did you decide to write this series as young adult rather than adult paranormal fantasy?

Aurora Whittet: I adore kids of all ages. I remember being that buck-toothed, artsy-fartsy, red haired, scrawny little girl, with only a couple friends because only a few kids were brave enough to befriend a girl like that. I remember the power books held for my friends and me. They offered a place to hide, to find new friends, to learn, and to cope. I want to bring those gifts to a new generation. I want other young people to find hope and friendship in my novels. I want them never to feel alone in this vast world.

Tabitha Lord: The voice in young adult fiction is necessarily different than in adult fiction. I find this particularly distinctive or obvious in the portrayal of romantic relationships. In your story, it is love at first sight for Ashling and the mysterious Grey Donovan. If this were an adult novel, you may have had to handle their relationship differently for it to be believable. However, I imagine many of us remember the feeling of first love – that all-encompassing, hopelessly devoted, lack of perspective love! It was exiting and wonderful and terrible! What was your favorite romantic scene between Ashling and Grey?

Aurora Whittet: You nailed it about the teenage love! I got a lot of feedback from adult readers, who were frustrated by the insta-love. But I stand by it, and so do my younger readers. Teenagers (and yes I was one once!) are impulsive, wild people. They see the world from a fresh perspective, their hearts have not been broken yet, and frankly they are werewolves! But to answer your question – choosing my favorite love scene is like choosing one star from the sky. I’m struggling! So, I’ll pick one scene from each book. From Bloodmark I’d choose the scene where Ashling and Grey first truly interact in the woods. From Bloodrealms I’d choose the waterfall scene. And from Bloodmoon I’d choose the scene when Ashling and Grey realize and accept the risks they must take to save Baran. There is such an innocent and vulnerable love between them.

Tabitha Lord: I found it very interesting that you portray the werewolf clans as ancient beings clinging to outdated customs. It created another layer of challenge for Ashling to overcome. When she’s forced to hide out in a small town in Maine, and attend school, her two worlds are at odds. Her struggle to find her way as a normal teenager, while only a subtext of story, mirrors her greater struggle to claim her place as a leader among her own people. Can you talk a little about this?

Aurora Whittet: There are so many ways that women and girls’ spirits are crushed. We’re told we’re fat, or not pretty, or not good enough. Even today we are still underpaid in the work force. The inequalities are real and, I have to admit, I was trying to make a point. When we hold on to old ideas that are toxic, we hurt our children. Even the subtle things we do matter, like when we women refer to our own bodies negatively in front of young girls. We’ve just added a layer of complexity to their lives. We’ve passes along the self-hate we might feel to them. I want to change that. I want to help build confidence in our children – in our sons and daughters.

I mirrored some of these ideas in Ashling’s world, from the ancient, male-dominant society of her werewolf family, to the cutthroat reality of her high school experience. There is a character she meets in school, who begins as an enemy, but grows to be a trusted friend. I hope the takeaway is that change is possible. We are all insecure sometimes, but if we could teach our children to build each other up instead of tearing each other down, the world will start to change.

Tabitha Lord: The relationships among the women in the story are powerful, particularly between Ashling and her mother. I know you recently lost your own mom. Would you like to tell us a little about her, and where we might find her spirit in your stories?

Aurora Whittet: I must admit, I hid inside my novels, just as my readers do. I needed that world because every day, and with every doctor’s appointment I attended with my mom, I lost her a little more. So I built the Bloodmark world and I put her there. I wanted her somewhere safe, where I could always find her. In so many ways she is Ashling’s mom. She was such a wild free spirit. I remember she’d invite random people to our home for Christmas because they had nowhere else to go and she couldn’t bear the idea of them being alone. She even karate-chopped a weasel once to save a baby rabbit! She found so much beauty in the world, no matter the circumstances, and I hope that I can bring a fraction of that love to the world myself.

Tabitha Lord: In your day job, you are an artist of a different kind! Do you identify yourself more as a visual artist or as a writer? Or is that an impossible question?

Aurora Whittet: I’m a creative, introverted little weirdo and I express myself in so very many ways. I’m an oil painter, an illustrator, a gardener, a graphic designer, and an author. By day I’m a graphic designer. I find joy in making things beautiful and helping people. I think my fine art is my soul seeking healing and rejuvenation. I don’t sell it. I gift it to people sometimes, but it is just a soul cleansing. At heart I am a writer though. I’ve always known it. I started writing around age eleven and never stopped.

Tabitha Lord: With the third book in this series, Bloodmoon, due to release next month, what’s next for you?

Aurora Whittet: I’m currently working on a children’s gift book, and I’m writing a new young adult novel that I’m giddy about. My beta readers are loving it too! Their enthusiasm helps fuel my passion for this new world and new characters.

Tabitha Lord: Thank you so much Aurora! Best of luck with all your endeavors!