Tam Kwan was on the phone with her husband when he died unexpectedly in an accident. If that wasn’t enough trauma to deal with, it might not have been an accident at all. He was somewhere he wasn’t supposed to be and was with a woman who he supposedly hadn’t seen in years. To cap it all off, the son they’d wanted to adopt from China is ready to come home. And, a daughter she never expected is dropped in her lap, almost literally.

If your head is spinning, imagine how the unwitting heroine Tam of Lyn Liao Butler’s Red Thread of Fate feels. Butler does a superb job putting us in Tam’s shoes as she deals with heartache, anger, betrayal, and hope. This novel’s unique storyline makes it a delight to explore. But its roots remain planted in the universal human emotions that pull on each of us throughout our lives and are never easy to navigate. We’re so delighted the author was able to answer a few of our most burning questions.

Amy Wilhelm: The concept of this tale is so unusual. Where do you get your ideas?

Lyn Liao Butler: From life, the news, and my imagination. I have a very active imagination and anything can make me go, “Oh! That would make a great story.” Sometimes my imagination scares even me.

AW: Is there a particular author or book that influenced or inspired your writing or decision to write?

LB: Yes! Liane Moriarty. She’s the reason I decided to write a book. I think in every interview I’ve ever done, I’ve mentioned that she is my writing idol and inspiration. If I ever meet her in real life, I will probably faint at her feet.

AW: Can you tell us about your challenges in getting your first book published (or this book?) 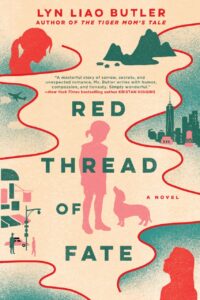 LB: My first book came out in a pandemic, and was pushed back because of Anti-Asian sentiments in the US. At least, that was what I was told. It took two years from the time my agent sold it for it to be published, and it was a very long two years. And now, my second book also came out in a pandemic. I’d dreamed of being able to do author events, signings, etc. when I sold my books, but alas, the pandemic put a damper on all that. But I’m still grateful that I PUBLISHED TWO BOOKS! and that I can walk into a bookstore or library and find my books. It’s been an absolute dream come true.

AW: What are you working on now?

LB: My third book, titled Someone Else’s Life, is a thriller set on Kauai and will be coming out in January of 2023. I’ve also finished a fourth book and am currently working on books five and six, another thriller, and a rom-com. I have so many ideas in my head that are just waiting for me to write them.

An excerpt from Chapter 1:

She was on the phone with her husband when he died.

Tamlei Kwan leaned against a wall outside the elementary school during her lunch break, phone tucked between her ear and shoulder. She balanced on one foot and slipped her other foot out of her taupe pumps. Ah, much better. The shoes felt like prisons after a summer of flip-flops.

“Did we get it?” Tony’s brusque voice greeted her. They were anxiously awaiting their letter of acceptance for the little boy they were adopting from China. But still. He couldn’t bother to say hello first?

Tam stuck her tongue out at the phone. “No, I haven’t heard anything. Will you be home for dinner?” Two days back at school and she was already acting like her young charges. “I could cook.” But seriously, why was she even offering? He sounded so distant, as if he had better things to do than take her call.

“Sure, that sounds good. I shouldn’t be home late. Thanks, Tam.” Tony’s voice softened on her name, and just like that, she was glad she had made the effort. She knew she wasn’t being fair. He had been doing a lot lately and she shouldn’t be so prickly.

A sudden cacophony of traffic noises made her hold the phone away from her ear.

“You going to the deli on Amsterdam?” she yelled.

“Yes . . . hang on a sec.” She could hear Tony’s muffled voice before he came back on the line. “I’m grabbing lunch before my afternoon class. Let me know if you hear from Sandra, okay?” Their caseworker, Sandra, had told them their dossier had gone through review and was in match mode, which meant they should be getting that letter any day now.

“Okay.” Tam chewed on her bottom lip. “Um, what should I make?” She wished she didn’t sound so wishy-washy. Why was she so confident in her mind, but the moment she opened her mouth, she sounded like a meek mouse?

“I don’t care, whatever you . . . HOLY SHIT!” Tony’s voice was cut off in the midst of a loud roaring sound that made Tam think of the old wooden roller coaster at Coney Island, which Tony had dragged her on once. Then, nothing. Silence.

“Tony? Tony! Hello?” Tam shouted. What the heck? She straightened off the wall, jamming her foot back in her shoe, all thoughts of her aching feet and wishy-washiness forgotten. She immediately redialed him, only to get his voicemail. His phone didn’t even ring. She dialed again and again, her heart jumping into her throat. She finally decided to try his department at Columbia University, hoping someone could find him.

Her hands were shaking and she touched the wrong contact, dialing Tony’s Pizzeria instead of Tony’s office. “Darn it,” she muttered, stabbing her finger at the phone. “I don’t want a freaking pizza.” This time, she hit the right number and a colleague of Tony’s in the Department of East Asian Languages and Cultures picked up, telling Tam that Tony had left for the day.

“What do you mean he left for the day?” Tam’s voice rose with each word. “I just spoke to him and he said he was going to the deli on Amsterdam.”

The woman on the phone was silent for a moment. “Uh, I saw Tony an hour ago and he was definitely leaving. He has a half day on Thursdays.”

A half day? What was the daft woman talking about? Tony taught an afternoon class on Thursdays at Columbia this semester and then had office hours to meet with students, which was why he was sometimes late coming home. She started to explain but realized she was wasting her time. She hung up after making the woman promise to have Tony call her if she saw him.

Looking at the time, Tam knew she had to get back to her own class of first graders. She tried Tony one more time but still couldn’t get through. She returned to her classroom, tamping down the panic that threatened to erupt.

Where was Tony? What had happened? Should she call the police? But if he had only dropped his phone and broken it, he wouldn’t appreciate a police hunt for him. She had a bad feeling in the pit of her stomach and left her phone on her desk.

“Mrs. Kwan. Mrs. Kwan! I have a question about hot and cold.” Tam looked up to see Steven Abrams waving his arm frantically. It was only the second day of school and already she knew this precocious little boy with the floppy brown hair would be a handful.

“I heard my daddy talking to his friends about you. He said if you got rid of your glasses and unbuttoned your shirt, you’d be hot. But if you took off your shirt, wouldn’t you be cold, not hot?” Steven tilted his head and looked up at her. His father was a single dad and so good-looking he had all the female teachers and some of the male ones fluttering about him.

“Oh, my.” Tam knew she sounded like an eighteenth-century schoolmarm, but she was at a loss. Normally, she was quick on her feet with the children and could come up with a clever answer to the questions her students asked. But now she could only stare, her mouth open “like a nincompoop,” as Steven had so blithely called a fellow student yesterday, while the six-year-olds debated her hot- and coldness.

She tugged at the white shirtwaist dress she wore. When she’d pulled the dress out this morning, she’d debated against wearing it since it was a few days after Labor Day. But it was such a warm, sunny day, and she wanted to wear the dress one more time, despite the fact that it would probably get dirty from the children. It was buttoned to the top and a size too big. She hated clothes that dug into her skin. She dressed that way for school, but if she had to be honest, she dressed that way outside school too. She’d much rather be comfortable, even if it made her look like a shapeless blob.

When the bell finally rang and she saw her charges safely to the bus and pickup area, she huffed out a breath and rushed to her car. Tony hadn’t called and she still couldn’t get through. She threw her phone on the passenger seat in frustration. Driving the short distance to their home in Dobbs Ferry, she decided she would call the police when she got home. Maybe they could trace his cell.

But as she pulled into the dead-end street that led to their town house at the bottom of the hill, her heart sank. Sitting in front of their unit was a Dobbs Ferry police car. She knew then—something bad had happened.