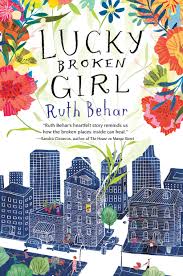 Lucky Broken Girl is the story of Ruthie Mizrahi and her family.  They have recently emigrated from Castro’s Cuba to New York City. In this story, we encounter a young child who is finally beginning to gain confidence in her mastery of English in a new country.  Ms. Behar’s work is an inspiring and moving story about loss, perseverance and hope.

Based on the author’s childhood in the 1960s, Lucky Broken Girl (2017) is a multicultural coming-of-age novel for young adults. As a former scholar and university professor myself, I am familiar with Ruth Behar’s work.  She is a very successful scholar in academia. I was an undergraduate when I heard her speak about her book, Translated Woman: Crossing the Border with Esperanza’s story (1993), a book based on ten years of fieldwork in a rural town in Mexico, and I was a graduate student when her second book, The Vulnerable Observer: Anthropology That Breaks Your Heart, came out.  Ms. Behar was awarded the MacArthur Fellowship, or “Genius Grant”, in 1988.  This is a prize awarded to individuals who have shown “extraordinary originality and dedication in their creative pursuits and a marked capacity for self-direction.”  That said, it is refreshing when scholars (who usually write for very specific/specialized audiences) turn to prose and YA books like Lucky Broken Girl.

Maribel Garcia: Ruth, thank you so much for joining Book Club Babble today.  I look forward to gifting this book to the young women in my life for so many reasons.  As a former Cultural Anthropologist myself, I couldn’t wait to see how you would retell the story of a child immigrant’s struggle.  What is it like to go from ethnography to fiction and what has been the response from young readers? 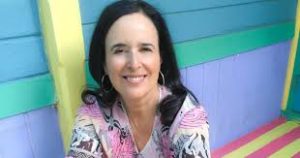 Ruth Behar: Thank you, it’s such a pleasure to be in conversation with a fellow cultural anthropologist who is writing fiction! I’ll tell you, it’s been a magical experience for me to write fiction for young readers. I had always wanted to write fiction, but worried I wouldn’t be able to master the craft. I was so accustomed to basing my storytelling on observations, notes, and interviews with real people in real places that I wasn’t sure I’d know how to write from my imagination. Then I discovered that in writing fiction we make use of everything we know and don’t know, all the heartbreaks we’ve ever felt, all the regrets we’ve carried with us all our lives. I drew on that deep well of emotion, and on the memory of my struggles as both an immigrant child and a wounded child, and somehow I found myself writing fiction. Yet there was something ethnographic about the writing. I felt as if the main character, Ruthie, was telling me her story.  She was my “informant.” All I had to do was listen and write her story down. Once I could hear her voice, the writing poured out.

MG: This book was based on real-life events, is there a reason it wasn’t written as a memoir-my absolute favorite genre? 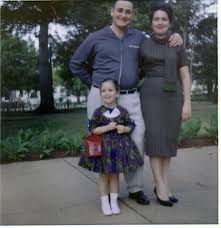 Ruth Behar: I considered writing a memoir, but there was so much I didn’t remember about my childhood. I wanted to have the freedom to invent what I didn’t know. Most of all, I wanted the freedom to make things more magical than they had been. There’s a scene where the hospital attendants take Ruthie out on a stretcher to see and touch the snow. It is such a beautiful scene and feels so real. My mother, when she read it, was certain it had actually happened. But in fact I made it up!

Writing ethnographies for most of my career, I had always worried about being true to everything I heard and observed in the field. It was incredibly liberating to be able to invent dialogues and situations that let me craft the story the way I wanted it to be told. That said, almost all the characters are based on real people, family, friends, and neighbors, and I was once the bedridden girl. The setting is very much the New York neighborhood where I grew up, which had a mix of immigrants from many places, and which I try to conjure with some ethnographic truth. So in the end, the novel became a blend of ethnography, memoir, and fiction. 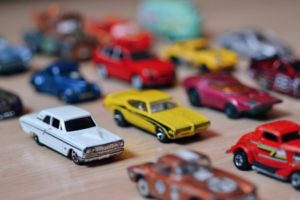 MG: Before the car accident, Ruthie’s chief goals are to graduate out of the “dumb class” for remedial students, to convince her parents to buy her go-go boots, and to play hopscotch with other kids in her Queens apartment building.  I loved that you were able to write a story about a child’s ability to “bounce back” from adversity and challenge.  Coming of Age story arcs are mostly about resiliency.  So much of your message is about our ability to maintain perspective, move forward, and overcome setbacks. How have your young fans responded to these major themes?

Ruth Behar:  I think the theme of resilience has allowed young readers to identify with the book. All young people have experienced a setback, or felt broken at some time in their lives. How you heal and become whole again after such adversity is an issue that young readers want to learn about. They are searching for ways to be strong, ways to move forward with hope and self-assurance.

MG: There is so much poetic language, the novel is full of vivid imagery which gives a glimpse into a child’s soul and her journey of self-discovery, what was it like to re-live some of these memories for you?

Ruth Behar:  Writing Lucky Broken Girl was an emotional process for me. Writing about people I loved who are now gone, like my maternal grandmother, brought tears to my eyes. I developed more empathy for my mother and father, as I thought about all the suffering they went through, my mother having to take care of me, and my father having to work three jobs to pay all the medical bills. I thought about my brother and how hard it must have been for him as a little boy to have to cope with a bedridden older sister. And strange as it may seem, I developed empathy for Ruthie, the little girl I had been once. At the time of the injury, I felt everyone’s exasperation as they waited for me to heal. I was often angry with myself that I couldn’t heal faster, that I wasn’t brave when I came out of the cast and didn’t just leap to my feet and start jumping around. Being bedridden for a year was such a traumatic experience that once I healed I tried to forget it happened. I think I became an anthropologist so I could be on the move, traveling from place to place, never being still. I’m glad I finally gave myself the chance to go on a journey into my childhood, an imaginative journey that opened me up to another form of self-discovery.

MG: Ruthie, like so many immigrant children, wants to embrace a better future, but also longs for the comfort of her family home and traditions, you did a great job in portraying this tension.  How do you think that these same concerns play out for young children of immigrants today? What is the same, what has changed?

Ruth Behar:  I think the tension remains similar today, between wanting to hold on to one’s heritage and wanting to embrace the vastness of American culture. What I feel has changed for young children of immigrants today is that there are many more resources now for affirming and celebrating one’s heritage. There are bilingual schools, for example, and there is now a huge multicultural children’s literature, which allows more children to see themselves reflected in books than was true in the past. When I was growing up, there weren’t any children’s books with Cuban-American characters, and now there are many to choose from. But while we have this exciting and growing literature that is bringing the joy of reading to many children, we are living in a tragic time of xenophobia and compassion fatigue about the plight of immigrants. Teaching all children that they belong, that no human being is illegal, has become an urgent mission.

MG:  I love that Ruthie had young immigrant friends, Belgian Danielle and Indian Ramu; her “flower power” tutor, Joy; and her vibrant Mexican neighbor, Chicho, an artist who teaches her about Frida Kahlo. How did you come up with these characters? Were any of them based on true acquaintances?

Ruth Behar: They are all based on real people I knew, some more fictionalized than others. None of the names were their actual names. Danielle is based on my friend Dinah, who was actually from Belgium, and her mother did make delicious cream puffs for us. Chicho is based on an artsy neighbor I still remember, and Joy is based on my actual tutor, though quite reinvented. Ramu and his brother Avik are based on children who lived in our building but whom I didn’t know well. By writing about them, I wanted to get to know them better. Sadly, the death of Avik as described in the book actually happened and has haunted me (and my brother) since our childhood.

MG:  I love that Ruthie also prays and writes letters to God, Shiva, and Frida Kahlo.  It is the perfect homage to Ms. Kahlo in a novel that I consider to bring the best of intersectionality—ethnicity, religion, class, gender—to Ruthie’s imagination.  In my own novel, my character attends Gloria Anzaldua Middle School.  How do you think that our generation of writers are re-writing coming of age novels?

Ruth Behar:  I’m so glad you love the letters that Ruthie writes in Lucky Broken Girl. Those letters came spontaneously and offered another way to get inside Ruthie’s thoughts and feelings and to see both her spirituality and her spunkiness. Since she’s told by the doctor at the beginning of the story that she should be praying to God, the letters become her way of praying, but she goes beyond God and reaches out to other spirits, like Frida Kahlo, who is the guardian saint of wounded artists. I love how Ruthie questions the limits of her identity and wants to figure out how she can be Jewish and also embrace other forms of spirituality.

I think our generation of writers is connecting with the sources of inspiration that have been meaningful to us as Latinas, as immigrants, as women, as minorities. Frida Kahlo is a force in our lives, as is Gloria Anzaldúa, who I had the pleasure to know personally. We are part of a generation that came of age learning about ethnicity, religion, class gender, in very personal ways, as well as by reading the literature that emerged from concerns about these categories of identity. This is the zeitgeist of our era, to use a term I remember from my early days of discovering anthropology. We are bringing the sense of who we are and how we engage with the world into our coming-of-age novels because that is how we experience and imagine reality.

Ruth, thank you so much for joining Book Club Babble today.  It has been a real pleasure and we look forward to your next project.