Frankie Jubilee, the protagonist of Jess Lourey’s Litani, is one of my all-time favorite characters, and I never expected to find her in a true-crime-based thriller set in the 80s. Frankie is half-nerd, sometimes brave and sometimes stupid, and just as unsteady in her self-esteem as most of us were at that age. But most of us didn’t have to face the death of our father and being thrown into the arms of a mother we don’t think loves us. As if all that isn’t enough to handle Frankie moves to Litani, Minnesota, where children are disappearing and dark forces appear to be at play.

Despite the horrifying background of this novel, it was a delight to read. You’ll probably zip through it in a couple of days, just like I did. I’m so pleased Jess was able to answer some questions for us. Thanks, Jess!

Amy Wilhelm: Although horrifying, the story you tell feels extremely authentic. What did you do to create a sentiment of “this could happen anywhere”?

Jess Lourey: Thank you! I hope that the characters feel like real people—flawed, seeking, hopeful—people you could be living next door to. I know I love books where I feel invited into the story by the familiarity of emotions and reactions even if the experiences are different from my own. If the characters are believable, the rest falls into place. Of course, there was the added element with Litani that the satanic panic of the ‘80s actually was happening everywhere.

AW: I noticed in your bio that you switch genres. What do you like about switching gears, so to speak? What is a challenge?

JL: Oof. I do love switching gears, but my agent isn’t a fan. Writing a book is such a tremendous commitment in time and emotion, though, that I have to be thrilled about what I’m writing. That means I have to follow the story that’s calling to me, whether it’s speaking crime fiction, horror, mainstream fiction, or anything else.

AW: Frankie’s voice is so authentic (there’s that word again). From her vocabulary to her feelings, she comes across exactly as who she is – a somewhat insecure and nerdy fourteen-year-old but also someone who is learning to speak up for herself and the things that are important to her. How did Frankie begin to speak to you?

JL: Frankie is one of my favorite protagonists, right up there with Cassie from Unspeakable Things, who’s also a teenager living 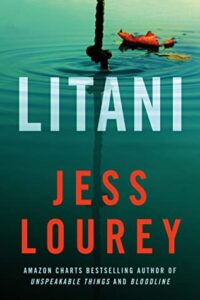 in the mid-80s. Like Cassie, Frankie came to me tentatively at first, just a faint physical picture. I knew the shape of the plot, so I started writing her in the story before I had a clear idea of who she was. Once I realized she was an artist who loved plants, though, and that she loved her dad and the outdoors more than anything, the rest started falling into place. It got to the point where the novel became very difficult to write because I cared so much about her, and I had to write her into terrible situations. She’s got resilience, though, our Frankie.

AW: What are the unexpected difficulties in writing stories centered in true crime?

JL: The true crime that inspired Litani is very dark, and it involves children. It was important that I understand the crimes well enough to give the reader a balanced synopsis of that period in history while also protecting the identity and experience of the victims. I ended up using the broad strokes of the true crime as the novel’s set up but making all the characters entirely fictional. The second difficulty was crafting Litani as, ultimately, a story of hope, a possible roadmap out of the darkness of childhood trauma. As someone who had a traumatic childhood, I know that healing requires honesty, vulnerability, and not glossing over the reality or the pain. That meant I had a lot to juggle writing the last third of the novel to make sure it ended on an authentic (that word again!) high note.

AW: Will your next novel revolve around a lighter topic to emotionally balance from writing this one?

JL: No, but I think that’s okay. There’s catharsis and healing in exploring the world’s darkness from the safety of fiction. I just turned in edits on The Quarry Girls, estimated publication date 8/16/22 from Thomas & Mercer. It follows drummer Heather Cash in the summer of 1977 as she fights to evade the serial killer or killers hunting in her tightknit Midwest community, where she soon discovers that she needs strength and secrets of the seemingly broken neighborhood women to survive. It’s inspired by the community response to the 2-3 active serial killers preying in St. Cloud, Minnesota, in the ‘70s, where I was living before my family moved to Paynesville, the town whose true crimes inspired Unspeakable Things and then Bloodline.

Thank you for having me, Amy! 🙂 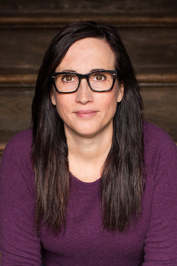 Jess Lourey is an Amazon bestselling writer who wears many hats – whether it’s writing nonfiction, YA adventure, magical realism, or crime fiction. She is also a tenured professor in both writing and sociology. When she’d not writing, teaching, or being an inspiring TEDx speaker, Jess can be found in Minneapolis, MN with her family and foster cats. Learn more here.