As a science fiction writer myself, I’m always excited to geek out with a kindred spirit! I caught up with Alton Kremer, aka Colin Alexander, at World Con Chicago this summer, and we had a great chat about his latest novel Murder Under Another Sun and the continuing adventures of the main character, Leif the Lucky. Welcome Colin!

Tabitha Lord: The world-building in this story is more around biology and earth science rather than technology.  Can you tell us a bit about the planet Heaven featured in Murder Under Another Sun? Is this a greenhouse situation?

Colin Alexander: Heaven is an Earth-like world, but it has a climate we would prefer not to see. It is, as one character says, hotter than hell and, yes, a bit of a greenhouse. I modeled Heaven on information from Earth’s far past with attention to the geology, climate, and the implications of both for life there. The biology the colonists find, and how terrestrial plants and animals might (or might not) fit in, are the consequences of that. How the climate came to be that way and how to cope with it are two of 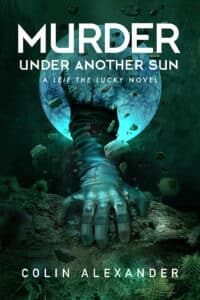 the mysteries that the colonists need to unravel.

TL: Leif is telling the story. He likes to come across as a tough guy who can handle whatever comes hsi way and who doesn’t need help from anyone. However, we can see that’s not really true. How do you see Leif?

CA: I’m rather fond of Leif, although I’m not sure he would appreciate that! Leif does like to project that tough image, and he likes to make a point that he doesn’t form strong attachments to other people. This is a big part of what allows him to be a starman. He knows he is a time traveler of sorts, on a one-way trip. This means he is going to leave everyone behind, and he says he doesn’t care. The only person he says he is attached to is Yong, and she is coming with him on this journey into time, so for him, that doesn’t count.  He is clearly in love with her, but he won’t admit it, even to himself. He’s also not so impervious to feelings about others as he likes to think. He’s lying to himself about his feelings. He is bedeviled by PTSD and his triggers, but he can’t really admit that either. So, I don’t see him as tough on the inside as he’d like you to believe, and I think he should come to terms with himself.  Whether he is going to do that is a different question.

TL: For all that you write about starflight and set stories in the future, you don’t use a lot of fancy technology. For example, there is not much AI. Could you talk about this?

CA: To me, the story is about the characters, not the technology. I wanted to see these characters, with all their issues and limitations, work through the problems they have without being able to rely on technology to solve those problems for them.  Consequently, much of the fancy tech they have is wrong for the situation they are in. In other cases, they don’t have the tech that they would need. For example, they are confronted with a murder mystery, but they don’t have a forensics lab. Well, why would you waste space in a starship transporting a forensics lab for a colony of only two hundred people? AI, or “artificial stupidity” as Leif refers to it, is also not a solution in their situation. This is a story about people.

TL: You assembled quite a collection of misfits, nut-cases, and crooks for the colonists of Heaven. How do you envision them as being the settlers on a new planet? Do you have a favorite among them?

CA: Indeed, the Heaven colonists are ill-equipped to be settlers on a new world with no opportunity to call for help from home.  Part of this is nationalism raising its ugly head. It is the wealthy countries who are sending the colonists, and in those countries, people are enjoying a golden age. The people who would be most likely to succeed are the least likely to go. At the same time, people from other places who would jump at the chance and might succeed don’t get the opportunity. To me, this represents the cynical political expediency of the whole program. It is more important to be sending people than it is to be making sure that the people who go are best able to do the job. After all, if the project fails, no one at home will know. Out of sight, out of mind. This adds another question to the story: how can this collection of individuals create a functioning settlement? Maybe that’s as big a mystery as the murder or the climate.

My favorite character among the colonists is Penny. This is a young woman, only 22, who does not look like the heroic type. She is not physically strong, not courageous, not a fighter. Her social skills are close to non-existent. Yet she tries to do what she sees as right despite everything that happens and without changing who she is. I wanted to root for her as I was writing the story, and I hope you’re going to like her as well.

TL: This book is both hard science fiction and a murder mystery. How do these two different genres go together?

CA: There is a long history of mysteries, including murder mystery, being embedded in science fiction. Isaac Asimov comes to mind immediately, with some of his stories going back about 70 years now. I think science fiction is a good place for a murder mystery because the nature of science fiction, extrapolating our world into the future and into imagined worlds, often generates mysteries as the characters explore the unknown. This is particularly true when the characters lack the appropriate training and resources for their investigation and need to work through the process in a strange environment. And there is a mystery in this story beyond the murder.

TL: What’s up next for you? Are we going to see Leif again?

CA: Yes, we will be seeing Leif again! We leave him headed home, but he has surprises waiting for him. All I can say now is that they won’t be pleasant. We’ll see more in 2023.

Colin Alexander is a writer of science fiction and fantasy. Actually, Colin Alexander is the pseudonym for Alton Kremer, maybe his alter ego, or who he would have been if he hadn’t been a physician and biochemist and had a career as a medical researcher. Murder Under Another Sun is his eighth novel. It is the second of the Leif the Lucky novels and picks up directly where the first, Starman’s Saga, leaves off. Colin is an active member of the Science Fiction and Fantasy Writers of America, Mystery Writers of America, and the Maine Writers & Publishers Alliance. Away from writing fiction, his idea of relaxation is martial arts (taekwondo and minna jiu jitsu). He lives in Maine with his wife.