Writers are attracted to an untold story, like teenage boys to Victoria Secret models. Laurie Notaro is no exception. When she came across the tale of the other women who wanted to race across the Atlantic before Amelia Earhart got there, she knew she had to be their champion and bring their stories to light. Notaro artfully presents a cornucopia of facts wrapped with prose as she offers up the accounts of three women vying for the title of first female to successfully cross the Atlantic.

In Crossing the Horizon, she introduces Elsie Mackay the headstrong daughter of English nobility, Mabel Boll a brash American socialite, and Ruth Elder an enterprising woman of limited means but great beauty. While their backgrounds are different, many of the challenges they encounter are the same. Who will navigate the planes? When will the weather cooperate? How will the venture be financed? And then, of course, how can I be first?

Join me as we find out more about this groundbreaking novel. Laurie, thanks for joining me to chat!

Amy M. Hawes: You have a background in journalism and your previous published works tend to cover light-hearted or comedic topics. I understand why this story appealed to you, but I wonder how you knew about it?

Laurie Notaro: It’s actually a crazy thing. I’m certainly not an aviation buff, so the way I fell into the information is a little random. I have TiVo, and the model I have is old and sucks. It tapes what it wants to tape, not what you ask it to tape. One time, I thought it was recording Real Housewives of New Jersey instead it taped this BBC show called Vanishings. I laughed to myself, wondering if it was going to be about Bigfoot. But  I watched the program, and it was about these women who were racing to become the first female to make the transatlantic crossing in a plane. They talked about Elsie Mackay, Princess Löwenstein, and Frances Grayson. It was so interesting, and I asked myself how did we not know this story? Especially considering that Elsie Mackay was quite well-known at the time. I believed it would make a great book. So, I pitched it to Random House.

AH: Obviously they picked it up. What came next?

LN: Well, they didn’t pick it up right away. They were intrigued by the idea but didn’t want the story to be about women who died in the attempt to cross the Atlantic. I realized they were right and I went back to the drawing board, seeing if I could find other women who participated in the quest. I decided to keep Elsie in the story and then I found Ruth Elder and Mabel Boll. It was incredible to discover two Americans involved in the enterprise. When I came across Ruth, in particular, the hairs stood up on the back of my neck. I thought, oh my god, that’s my girl! She was the missing part of the story I needed. Mabel offers fabulous comic relief, but Ruth’s history is special.

AH: How much research was required to uncover the historical records of these women?

LN: It took quite a while, over a year. What was astonishing was that they were famous in their day–1927 and 1928. They were on the front pages of The New York Times, The London Times, and newspapers all over the world. Then they essentially vanished from history and Amelia Earhart supplanted the narrative. I felt compelled to tell their story. In my opinion, they did so much more for aviation and feminism. They wanted to prove that women could do anything men could, especially Elsie and Ruth.

AH: Going back to my first question, is this your first research-based work of fiction?

LN: Yes, this is the first serious book I’ve written. I’ll always be known predominantly as a humor writer because that’s where I first got my start in publishing. Before that, I was a journalist–an in-depth reporter, features and news writer. And, even going back to college I had my own column that people seemed to like for whatever reason and that’s what I became known for. It led to my job at the Arizona Republic. I ended up with a daily column on AZ Central, one of the first websites for a newspaper. I also had a weekly column in the physical paper. At one point, I decided to put my college columns together and try to get them published as a book, which ended up being The Idiot Girls’ Action-Adventure Club. It took seven years to get it done. I self-published first then an agent saw it, picked it up, and Random House published it. That one and all the other novels I’ve written are very light, not heavy at all.

AH: How did you transition from authoring that type of novel to writing Crossing the Horizon?

LN: I felt like I was returning to my roots as a journalist. It reminded me how much I liked doing research and how much I missed learning about things. It was a pleasure to construct a narrative that didn’t have to focus on humor, and it was a much more enjoyable experience to write Crossing than any other work. Writing humor is super hard! It’s always subjective, and you get harshly criticized if you don’t make someone laugh because you’ve promised you’re going to make them laugh.

I did a lot of research for Crossing, and it was heavily outlined. So, by the time I began the writing process, it was very easy. I knew exactly where the story was going to go. Writing this novel was probably the best experience of my career. I loved writing it, and I loved writing about these three women!

AH: That’s fabulous. What a pleasure! The three main characters, Ruth, Mabel, and Elsie are very different from one another. In particular, Mabel’s outrageous and blunt personality contrasts the earnestness of Elsie and Ruth. How much of Mabel did you add in and how much was already there?

LN: She really had a larger-than-life personality. I learned a lot about Mabel because she sought out the publicity. She planted stories and invented things about herself, which we learn in the story. She made claims that simply weren’t true, even creating her own backstory. Mabel also had a huge feud with Peggy Hopkins Joyce that was all recorded. The feud helped me find Mabel’s spirit. I had to fill in some of the blanks, but all of the episodes in the book are very, very factual.

Sometimes Mabel would call The New York Times crying, claiming she’d been cheated out of her place in history. Many felt the might of her dramatic nature, making it quite easy to put her together. Then when I talked to George Boll, her nephew, he verified she was a very brazen, very forceful woman. She could be funny and kind too, but she got into fights a lot, and people were terrified of her. She had balls, even though she was a woman.

AH: We learn in Crossing that many people, both men, and women, died trying to cross the Atlantic. Why do you think there were so many attempts when the chance of success was dismal?

LN: In that time, flight was a toy. The Wright brothers made their flight in 1903, and we’re only talking about 24 years later. It was a game for the wealthy. If you had the money, you could get up into a plane. Ruth was the only one who didn’t have money and the only reason she got to do it was because she was pretty.

The final death count in 1927 before Ruth Elder went up was twenty-seven. And, most of the navigators for these women knew they weren’t going to make it. For example Frances Grayson who we meet at the beginning of the story, has a navigator named Brice Goldsborough. The night before they took off he held his wife in bed all night long because he knew they wouldn’t survive. It was really sad. Much like the guy who flew with Princess Löwenstein, Lesley Hamilton. They were both aware they were flying to their deaths. But because they were gentlemen and they’d given their word, they did it. Hamilton was estranged from his wife because he was a known womanizer but when she found out he was going to attempt a transatlantic flight she decided to reconcile with him. She got on a train to meet him in Nova Scotia, where they were supposed to land, but of course he never arrived. There were so many good, but sad, stories that needed to be edited from the book. I plan to put them on the website www.crossingthehorizonbook.com.

AH: I’m sure that will be fascinating! Here’s something else that intrigued me about these women. None of them were going to be the primary pilot of their planes, yet they all had navigators, with the exception of Mabel. All the others were pilots. Even, Amelia Earhart didn’t fly the plane in her successful crossing. Who knew? I think most people assume she flew the Friendship, just like I did and everyone I’ve asked about it. Did you know the truth before you did the research?

LN: I thought she flew the Friendship, just like everyone else. I had no idea. When I found out, my jaw just dropped. In fact, last weekend I got into an argument with an old Marine pilot. He insisted that Earhart piloted the plane. I explained that while she was the first female to fly solo across the Atlantic that was in 1932. In 1928 when she set the record, she was asleep in the back of the plane. She claimed herself, “I was just baggage, like a sack of potatoes.” She recorded in the log book, and she kept the liquor away from her alcoholic pilot, Wilmer Stulz. But the truth is, Earhart was overcome by fumes and had a headache. She fell asleep and woke up in Wales a famous woman! Essentially, Putnam and Stulz handpicked her to make money. Earhart was never going to fly that plane. Her only important job was to keep the real pilot sober!

AH: From what I read, Elsie Mackay was an accomplished pilot. Do you believe she could’ve flown her plane herself?

AH: So, why didn’t she? Why wasn’t it considered?

LN: Well, Elsie and her navigator, Hinchliffe, knew if the weather was not going to be on their side there was no point taking off. They were making the crossing from Europe and it was a more difficult route because of the currents and winds than a west-east crossing. They needed two people because it would be more challenging to pilot the plane. Their plane, the Miss Columbia, could be piloted by either of them. It had dual controls and there was no need to change seats. So, we don’t know exactly what happened on their flight.

AH: Crossing the Horizon is packed full of interesting and true stories. I’m sure readers will have as much fun reading it as you had writing it. 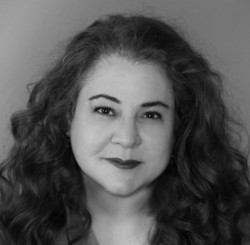 LN: I hope so. But, honestly, I don’t care if this is the last thing I ever write, or even if it is successful because my writing journey was simply amazing!

Laurie Notaro was a reporter and columnist for the Arizona Republic. She is the New York Times bestselling author ofThe Idiot Girls’ Action-Adventure Club, It Looked Different of the Model, The Potty Mouth at the Table, and other works. She lives in Eugene, Oregon.