Pest, Elizabeth Foscue’s debut novel, is a charming coming-of-age tale sprinkled with drama, laughs, and an unlikely romance. Pest follows high school senior and pest control technician Hallie Mayhew as she stumbles through the lavish estates of Montecito and mean streets of Santa Barbara in pursuit of college scholarships, justice, and maybe even romance. I’m so pleased to catch up with Elizabeth today on BCB!

Tabitha Lord: Pest’s protagonist Hallie Mayhew isn’t your average high school senior–she’s also a seasoned pest control technician with her family’s pest control business. What made you decide to write a character with such a unique side gig, and what did your research look like as you were writing Hal’s job? 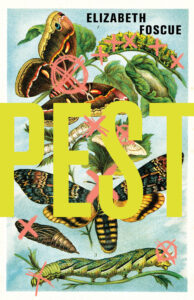 Elizabeth Foscue: The concept for Pest developed in reverse. I knew I wanted Hallie to have an unusual skillset or area of expertise—something that would lend itself to amateur sleuthing—but I had no idea at the start what that would be. Then, one morning, the pest control technician turned up to do the quarterly service on my house. I watched him grab his equipment and waltz right through the gate into my backyard and I thought, “Wow, that guy can get into any backyard in town.” It was perfect.

I’ve unfortunately had more than my share of vermin encounters since moving to Santa Barbara, which gave me a solid starting point for Hal’s adventures. Pest control technician Shane Taylor was very generous with his time and knowledge, and the commentary he provided during my family’s rodent tribulations inspired some of Hal’s rat-related musings. I also started following my pest control company on social media and did lots of googling. And, you know, there are youtube videos on just about everything.

TL: The story is set in picturesque and luxurious Santa Barbara, but Pest also reveals a very real side of this community. Unlike her wealthy and privileged classmates, nothing in life comes easily to Hal.

EF: Santa Barbara is one of the nicest places to live on earth, and because of that, wealth and fame are fairly commonplace. Santa Barbarans mostly take these things in stride, but the contrast provides a great backdrop for this kind of story. Hal’s hopes and dreams are at the mercy of a nepotistic scholarship committee; her parents cause her endless headaches; and clients, classmates, school administrators, skunks—they’re all pitted against her! Poor Hal can’t catch a break.

TL: Your protagonist, Hallie, is authentic, determined, and admirably snarky. Similar to figures such as Veronica Mars, how would you describe Hallie’s uniqueness? How does Hallie’s complexity take shape?

EF: I love snark! Love to read it, love to write it. I consider Hal to be a generally earnest person who is saved from despair by her sense of humor. Considering all she puts up with, I think we can forgive her for being cranky at times. She’s also somewhat oblivious, mostly because she’s busy and focused, but self-absorption is occasionally a factor. Hal’s finer traits—her maturity, her competence, her self-reliance—developed out of necessity. Her mom walked out when she was little. Her dad works full time. She hasn’t been neglected but neither has she been able to rely on her parents for much beyond the basics. And her remarkable tolerance for bullshit comes from being subjected to more than her share of it.

TL: Pest is brimming with flirtatious rom-com hallmarks, amidst its surprising twists. Hallie and Spencer form an unlikely bond, reflecting an adorable opposites-attract narrative. Why did you choose to include these elements?

EF: Pest is a comic novel and nothing pairs better with humor than romance. But I love romance on its own merits. Romance adds a different kind of adventure to the story and reveals things about characters we couldn’t otherwise know. And the instant I decided to set the book in Santa Barbara, I knew it had to have Spencer in it. Just after we moved to town, my husband and I were leaving a city parking lot when the car in front of us stopped and parked, blocking the exit. A shirtless kid hopped out, looked back at us, and called, “Gotta get some rezzies!” like that was a perfectly reasonable explanation. Then he gave us a shaka and strolled into a restaurant. It was the most California thing I’d ever seen. We laughed until we cried. That scene went into the book almost exactly as it happened, and poor Hallie never stood a chance.

TL: Pest is based on a poem written for you by Patrick Weaver. What’s the story behind this?

EF: Patrick is a brilliant poet and essayist whose work has delighted his friends (and subscribers of various sailing listservs) for decades. One day, he and I were discussing a New York Times article on guano mining in the South Pacific and I made a Robert W. Service joke. A few hours later, he sent me this salty, hilarious “Shooting of Dan McGrew” parody, complete with a guano-mining backstory and featuring “the lady they call Foscue” instead of “the lady that’s known as Lou.” Obviously, I adored it and wanted the whole world to read it. I thought I might be able to get it published if I tweaked a few things and wrote a book around it. Patrick said, “Have at it,” so I did.

TL: Pest is your debut novel! What’s next for you?

EF: I don’t feel like I’m done with Hallie. I initially wrote Pest thinking it would be the first in a series, then revised it to stand alone when that seemed like a better fit for the market. But Hal has unresolved issues and more adventures in store. I hope I get the chance to write them.

Thank you so much, Elizabeth! Best of luck with your writing career. Now, dear readers, enjoy a sneak peek of Elizabeth Foscue’s debut novel Pest!

It was the last day of August and the Montecito morning was almost warm. The soothing tinkle of a water feature screened the ambient sounds of lawnmowers and leaf blowers. The sky was blue and clear and the air smelled of flowering jasmine.

I stared down at the field of scattered rat poo. “Yes.”

Irma, the house manager, said some very bad words in Spanish and stomped back and forth across a patch of wooly thyme. The chateau-style Montecito estate had been recently landscaped, the guest cottage planted with a thoughtful mix of drought-tolerant succulents and a ground cover of flowering ice plant.

“How did they get in?” Irma wailed. “No, it doesn’t matter. You have to get them out. The Guests,”—she referred to them with verbal capitals—“say the noise kept them up all night long.”

This I did not doubt. The rustic plaster application on the exterior walls camouflaged the telltale rat smudges, but to a trained eye—which, I’m sad to say, mine is—they were everywhere. And the rat runways, those little trails rats bushwhack as they go about their ratty business, were spacious boulevards.

This place had serious numbers of rats in the ceiling and anyone staying here would be getting an all-night, all-rat revue.

There must have been ten bedrooms in the enormous house I’d passed in my search for the service lot, but maybe sharing a roof with visitors was considered gauche, maybe the main house had bad feng shui, maybe the guests were Suppressive Persons—I didn’t even ask. Rich Montecito weirdos make all other rich weirdos look like amateurs.

“Can’t you just block up the hole? Trap them in there?” Irma pleaded.

Trapped rats are cannibalistic. If you seal them up together, your rat-Broadway becomes the rat-Octagon as they fight and scream and consume one another. But this is way more detail than most clients want. I gave an apologetic shrug and pulled the metal clipboard from under my arm, turning to a fresh estimate form.

“Oh my god, oh my god. Listen, okay? We can tent it if you’re done by four. The Guests are wine-tasting in Santa Ynez but they’ll be back for dinner.”

Clients always want the job done by four, if not immediately. And, as my dad likes to say, if wishes had wings, bullfrogs wouldn’t bump their butts jumping over logs.

I wrote a nice, big number at the bottom of the form, ripped the sheet off the pad, and handed it over. “The structure will have to be vacated for seventy-two hours. And we can’t get to it before Thursday.” I turned and padded over to the path I’d walked in on. If there was any traffic on the 101, I was going to be late. “Call that number if you want to get on the schedule.”

“Wait!” Irma shook the estimate at me. “Where are you going?”

I answered without looking back as I hurried in the direction of the service lot. “School.”

Elizabeth Foscue grew up in northwest Florida and the British Virgin Islands. She attended the University of Florida, where she majored in linguistics and fleeing town on football weekends. She met her (now) husband at a sailing team meeting the second week of school and it was his idea to move to Annapolis, Maryland. She earned a J.D. and LL.M. from Georgetown University Law Center before escaping to SoCal after ten years of nasty, mid-Atlantic weather. Elizabeth lives in Santa Barbara, California with her husband, norrbottenspets (that’s Swedish for “barking fur-factory”) and two awesome kiddos.