As a writer, words are my purview. So, it would only be fair that I give Lara Elena Donnelly’s Base Notes due credit for leaving me speechless, i.e. wordless. Like Ella Fitzgerald’s singing, Donnelly’s voice is startlingly clear and inimitable and words do not do it justice. One must listen, i.e. read, to appreciate their art.

Vic Fowler is an unpleasant but imminently talented perfumer. Vic doesn’t like people much, which is a good thing since Fowler designs perfumes to murder them. The quintessential artist intended to create brilliant perfumes for their own sake, not as vehicles of death. But when Vic’s partner dies and the bills begin to pile up, a one-time creative necessity swiftly mutates into golden handcuffs. If Vic doesn’t comply, those golden handcuffs might become the kind the police use.

Amy Wilhelm: The premise of Base Notes is gorgeous and fascinating. What kind of research did you do to make sure you had the right foundation to support the architecture of your novel?

Lara Elena Donnelly: I am not at all sure that this is a house I built foundation-first. Next book I should really keep a list of all the things I google while I’m writing, because I have a friend who did this and the resulting list was incredibly entertaining. I will often tweet the tabs of the day while drafting, and they are usually a study in “one of these things is not like the other.”

Researching novels for me consists of consuming a bunch of vaguely relevant material I don’t end up using (or more likely, use without realizing), and then frantically looking things up while drafting. The foundation of Base Notes had far more to do with character, theme, and formal conceit. Research was either hopelessly broad (“this Netflix documentary has perfume in the title!” “Ooh, an academic paper on queerness, skank, and perfume! Ooh, another one on historical failures to taxonomize ambergris!”) or incredibly specific, panicked, and in the moment, distracting me from the fact I had eight hundred more words to write that evening.

I was very lucky to work with several fantastic indie perfumers (Chris Rusak of Chris Rusak and Carter Weeks Maddox of Chronotope) on some of the technical and business aspects of Vic Fowler’s world. I spent a lot of time reading blogs and scrolling hobbyist forums and asking dabblers on my perfume Slack their preferred methods of tincturing animalics at home.

My favorite part of researching this book was visiting perfume shops—Perfumarie in SoHo and Twisted Lily in Boerum Hill were truly perfect places to sniff some inspiration and snap up samples, and especially to chat with the wonderful people who worked there. At Perfumarie I even attended a mixing workshop with Andrea Bifulco of Nose University, who graciously answered 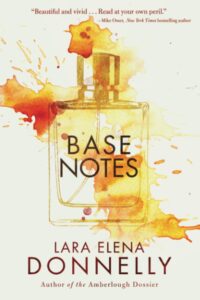 questions over email afterward. Sadly, the incarnations of Perfumarie and Twisted Lily that I spent so much time visiting are now defunct. Like many places in New York, they’re just storefronts steeped in memory.

AW: I love when authors use words to describe things in unique ways, but I have to admit, sometimes it is a distraction when those descriptions don’t align with my perception of how a character thinks. With Vic Fowler, the opposite is true. Telling the story with these creative insights and unusual words, only makes it more TRUE. How did you get inside his mind that way?

LED: Honestly, I didn’t have to work hard at it. Which is possibly not a wonderful thing to admit, given Vic is a cold-blooded killer and also kind of a jerk. But the descriptions and observations all came incredibly easily. I’m already a quite description-heavy author—food, wine, clothes, the weather, the motions of people’s hands… I’ve always had a running inner monologue of what I’m observing, turning phrases to describe it, so it feels very natural to put onto the page. Base Notes is just the Vic-flavored version of that, which was quite fun to do. Sometimes you just want to cut loose with the snide comments, the cruel asides, the rhetorical razors. It’s not enough to just describe the wine—Vic has to dunk on the people who won’t appreciate it and is clever enough to craft the insult in real-time. I had to take twenty minutes to figure out the wine I wanted to pair with the fictional meal, and then come up with the turn of phrase on top of it. Not quite as satisfying as a vicious bon mot timed to land where it will do the most damage, but better than nothing.

AW: It felt strange to call Vic a “he” in my preceding question. How does Vic think of his gender identity? Are these questions more fluid than our current vocabulary allows them to be?

LED: It felt strange to answer your preceding question without pointing to the fact that Vic is never given a pronoun in the novel. It’s not something we focused on in the marketing copy or the promotion of the book, because I wanted to see if people would pick up on it if they weren’t clued in, and what they would take away if left to their own devices. This is actually the only interview I’ve done where someone has asked about Vic’s gender.

So far readers and reviewers have mostly used he/him, which I think is down to male as the default more than anything else. (Except perhaps the fact that Vic visits a barber early in the book; but there are a lot of people who aren’t men who go to barbers.) I’ve gotten some she/her Vics, which were very interesting, and even more they/thems. Some readers have avoided pronouns entirely, and some use whichever feels right in the moment. Most people don’t even notice the lack of pronouns until it’s pointed out to them.

I’m not sure Vic thinks much about gender at all, except as a nuisance. Or, more accurately Vic has thought a lot about gender but doesn’t much feel like talking to the reader about it. It isn’t germane to the story. And as far as Vic is concerned, it’s none of the reader’s business.

AW: You teach writing. What’s the one thing that can accelerate a budding writer’s learning curve the most?

LED: I was just talking to some other writer friends about moments in our craft journeys that had really moved us forward by leaps and bounds. For me, it was definitely finding the right people to talk to—about your own writing, and theirs, and books you had both read, and especially about craft and its mechanisms generally.

Another big leap coincided with my first very serious teaching gig—I was asked to be a guest lecturer for a semester-long craft class in the MFA program at Sarah Lawrence, and had to really learn what I actually believed about craft in short order, and then figure out how to convey it to students. I think I did all right—they had me back to teach a workshop the following semester.

It was a trial by fire, and showed me that a lot of what I thought I knew about writing was received wisdom that didn’t hold up to close examination. I had been repeating things other people told me about writing, and suddenly realized I didn’t believe them and didn’t use those things in my own writing. A lot of this was worked out in conversation with writer friends, usually about two days before I had to teach my weekly class.

I guess the underlying lesson here is learning to critically examine your beliefs about craft, on your own or in conversation. Objectivity about your own work or beliefs (and other people’s works and beliefs, especially if you really admire or really loathe them) can be incredibly difficult, but it’s also really valuable. Having some external pressure can help you work toward that objectivity, I think.

It occurs to me that Holly Black, one of my Clarion instructors, told us that mediocre books were great tools for budding writers because they showed their seams; in a great or abysmal book, it’s hard to see what’s working versus what isn’t. In a mediocre book, it’s easy. I wonder if this is a similar situation to finding objectivity about your craft beliefs. When you’re really wedded to something, or really against something, it’s hard to understand why, because you’re already so committed.

Okay now I’ve given like, three tips for the price of one. What a bargain! Use what you need. Share the rest.

Lara Elena Donnelly is the author of the Nebula, Lambda, and Locus-nominated trilogy, the Amberlough Dossier, as well as short fiction and poetry appearing in venues including Strange Horizons, Escape Pod, Nightmare, and Uncanny. She has taught in the MFA program at Sarah Lawrence College, as well as the Catapult classes in New York and the Alpha SF/F/H Workshop for Young Writers. In the summer, she wears The Cobra & the Canary. In the winter, Nudiflorum. And some others in between, to keep things interesting. As of this writing, she lives on the grounds of the old Hamilton Estate, with a screenwriter and a small mask-and-mantle tabby pretentiously named after a bitter Italian aperitif.