I met Colin Alexander last year, before the world shut down, at Boskone, an annual SFF convention held in Boston. The event gathers authors, scientists, artists, musicians, and gamers for a weekend full of panels, programs, and meet and greets. Colin and I geeked out over everything from our favorite sci-fi series to writing craft to how best to work the audiobook market. So, when Colin’s latest book released, I was eager to get my hands on it.

This book checked off all my science fiction storytelling boxes – from a futuristic yet familiar world, to the complex politics that create a backdrop for the plot, to characters I cared about and wanted to follow along on the ride. I’m so pleased to chat with Colin Alexander today on BCB!

Tabitha Lord: When we meet the main character, Saoirse Kenneally, she’s a mess, but very quickly we find ourselves 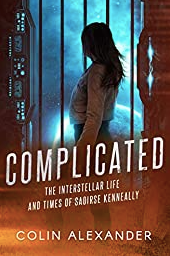 standing in her corner and rooting for her. I think anti-heroes make such interesting, multi-faceted characters, and Saoirse is very compelling. How did she come to life in your imagination?

Colin Alexander: Saoirse is very personal to me.  I’ve seen the impact of alcohol and drugs, both professionally and personally, so this character had been growing in my mind for a while. It was easy to see her at the beginning: a complete hot mess and bundle of contradictions and I knew I was going to write a story about her. She has that mix of the good – smart, athletic, good heart underneath – and the bad (and ugly) – liar, thief, selfish, alcoholic. She’s aware of what she does and there’s a fair amount of self-loathing mixed in. She has agency, it’s just that some of her choices aren’t so good … It may be having had a career in cancer medicine, but I’m always looking for someone to beat the odds against them, even if it’s not a smooth ride. So, she is someone you could scream at, possibly even laugh at, but at the end you’re cheering for her.  I can see my kids saying, “Dad, we met this woman at Starbucks and …”

TL: As a fellow science fiction writer, I appreciate the complexities of world-building. Can you talk a little about the principles and backstory you incorporated into Complicated?

CA: When we’re building a world, I think we would all agree that it has to be internally consistent and allow us, as readers, to set aside disbelief and come live in it. The tech in Complicated is intended not to be too far advanced from today because the problems the characters face are familiar ones.  So, there had to be limits on artificial intelligence and that meant there had to be reasons why those limits exist. That goes into the backstory. Similarly, if a scientific discovery has allowed us to explode out of our solar system – the cork out of the champagne bottle – there are going to be logical consequences for political systems and resource utilization problems for whatever polity is struggling to cope with the situation. Having that discovery provide a means of star flight that gets around the limitation of the speed of light can mean that the fastest way to send a message is on a ship. This imposes constraints on communication and that, again, has to be consistent with the way this future world is designed and functions. All of these are part of the backstory. Finally, nations that grow big and last a long time have a tendency to develop a bureaucracy, and humans also have a tendency to muck up their political systems. For some of the political backstory, I drew on historical examples from Russia and Poland.

TL: To make any fantastical or futuristic world believable to readers, the relatable parts of the story have to feel authentic. Will you share a little about how you integrated futuristic technology into the story, and what kind of research you did to make that technology feel plausible?

CA: As a reader myself, I have the same feeling that I want the future setting to feel “relatable.” First, let me say that it is really important in this story for the technology to be advanced but not too advanced. After all, if we could put a chip in Saoirse and cure the substance abuse, then she doesn’t have to do the work. This is her story and if there’s no personal struggle, there’s no personal victory. So, how do we extrapolate from where we are today, but have it based on what we currently know? It’s really a matter of digging into books and scientific publications to get the lay of the land. We don’t have a working star drive yet (sigh) but there have been a number of publications dealing with the science behind the possibilities of opening wormholes.  Reading through that provided a basis for the interstellar flight in Complicated.  The planet Saoirse journeys to is similar to a specific period in Earth’s history and I went through a number of books and articles to try to get the setting right – along with the consequences the geology and atmosphere have for the story. We have sent a mission to Titan and NASA has plans for a flier that will explore that moon late this decade. The reports for the earlier probe and what is public about the upcoming one helped me understand how to set up the Titan scenes. I will fess up to one liberty I took: the data from Titan indicate that the atmospheric haze is so thick, you probably can’t see Saturn from the surface. I loved that visual, though, so I invented a reason to alter the situation a bit.

TL: The politics of Complicated were, well, complicated! I really enjoy a story where there are shades of gray. I think it’s a balancing act between giving the reader a satisfying experience, with characters to cheer for, but not necessarily a ‘Hollywood’ experience, where the villains are all bad, the heroes all good, and the plot is formulaic. I think you hit it just right with Complicated. Were you thinking at all about this as you wrote the story?

CA: Thank you and yes. I think people have reasons for doing what they do. Even folks who do bad things may think they are in the “right” and often have ways of justifying what they do, if only to themselves. It’s also true that the people we consider the good guys usually have some issues in their background that aren’t so nice. I wanted my characters to feel authentic, and that meant they had to have their good and bad sides, make good and bad decisions, and deal with the law of unintended consequences. Saoirse is, I think, the prime example of this. It is impossible to grow if you don’t have obstacles to get past and personal problems to solve. So, yes, I was definitely looking for that balance as I wrote.

TL: In addition to writing science fiction, you have an actual career in science. Has that career influenced your writing in any way?

CA: Yes, I’m sure it has. Having been in medical research and biochemistry for over three decades, I like playing with what biology might be like elsewhere and how drugs and medicine might work in the future. This helps to create details about a character’s background so that the person feels real to me, and I hope to you, too. This also comes in handy when we talk about strange, new worlds. I have to work really hard at the mechanics of a star system, because I don’t have the background in physics, but I enjoy playing with the plants and the atmosphere and how that relates to living there.

TL: You’ve been writing science fiction for quite some time now. How has your storytelling evolved, and how do keep the ideas fresh?

CA: I hope the storytelling keeps evolving for the better! My stories always start with a character. A person will pop into my head and I find myself thinking about what they are like, what it would be like to meet them or have coffee with them at Starbucks. (You can tell I drink a lot of coffee from this and the first question!) That leads to a scene that the person is in or a problem the person is facing. The story grows from there: how does that person get to be in that scene and what happens next? For better or worse, this has led me into writing different types of stories. My previous book, Starman’s Saga, was very much hard science fiction and space exploration involving humanity’s first interstellar flight, and before that, Accidental Warrior, was a coming-of-age in an alternate history America. Both of them started with mental images of the main character in one particular scene.

CA: Right now, I am wrestling with a pile of 350 pages of hand-written — yes, hand-written — scenes and notes that I am trying to bash into a coherent manuscript. I can promise you that there will be a strange world with a non-technological civilization. There will also be a princess, but there won’t be a dragon. You’ll see it in (I hope) the beginning of 2022.

Colin Alexander is a writer of science fiction and fantasy. Actually, Colin Alexander is a pseudonym, maybe an alter ego, or who the author would have been if he hadn’t had a career as a medical researcher. He’s been reading science fiction since he was ten and has published six books. His newest book, Complicated: The Interstellar Life and Times of Saoirse Kenneally was released in January, 2021. He’s an active member of both the Science Fiction and Fantasy Writers of America and of Mystery Writers of America. Away from writing fiction, Colin is a doctor and a biochemist whose idea of relaxation is martial arts (taekwondo and minna jiu jitsu). He lives in Maine with his wife.