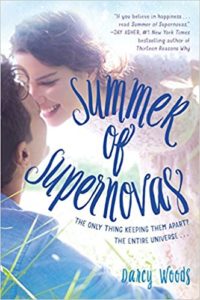 Summer of Supernovas is Darcy Woods’ debut young adult novel. In it, a quirky girl named Wil navigates love and loss during her last summer of high school. Wil’s lived with her grandma ever since her beloved mom passed away, but despite her grandmother’s misgivings, she’s held tight to her mother’s belief in astrology. And according to her charts, Wil has only a few short weeks to find the love of her life before she doomed to ten more years on a romantic roller coaster.

Even if following the stars is a little eccentric, Wil is determined to stay the course if it means not following her mom’s footsteps and falling for the wrong guy. After all, she’s still never met her father. So even if soulful guitarist Grant has caught her eye, Wil’s determined to keep away since his sign is all wrong. Maybe she can make it work with his astrologically appropriate younger brother Seth. Maybe. Is Wil’s fate sealed or should she follow her heart instead?

Mary Sullivan: When we meet Wil, we discover that she’s fixated on finding her cosmic match. In fact, she steadfastly refuses to date a guy she’s interested in because he has the wrong birthday. Although Wil’s interest in astrology is in many ways an homage to her late mother’s memory, she’s nonetheless committed. How did the stars end up playing such a central role in this story?

Darcy Woods: As you mentioned, Wil’s commitment to the stars is enormously tied to honoring her mother’s legacy, but beyond that, there’s also a psychological component of good old-fashioned FEAR. Life can be scary! Especially for a girl who’s been marked by loss at such a young age. So if someone tells you, “Hey, here’s a blueprint for your life that will potentially circumvent all disasters!” That’s a pretty arresting concept. In Wil’s case, astrology has become her big, starry security blanket.

MS: Darcy, you have such a cute, unique style, and on your website you say that, “Vintage dresses, fun shoes, and brilliant red lipstick make [my] heart go pitter patter.” Wil also has a similar look in the story. As a writer, how do you decide how much of yourself to put in your books?

DW: Aww, thank you, Mary! And great question. For me, I think it genuinely depends on the story I’m telling. When I first “met” Wil in my mind palace, she had a very distinctive style—funky finger waves, cat eye glasses, etc. Sure, there are fragments of myself in some of her physicality, but less so in her psychological architecture. Whereas in my current WIP, I’ve reversed this because the story content aligns more directly with my own personal/emotional experiences rather than stylistic attributes. The reality though, is that all my characters are Frankensteins, an amalgam of people I know (in real life or fiction) that I borrow parts and pieces to form a three-dimensional person.

MS: Summer of Supernovas takes place in Carlisle, a town that seems a little neglected. After all, the water tower’s faded paint only reads, “ity of Carl.” Wil is overwhelmed by a love interest’s fancy car and general flashiness. Wil also makes a speech to her other admirer about him not “selling out” by pursuing a business degree instead of music. In short, I noticed a distinction between the haves and have nots. How did this theme find its way into your novel?

DW: Ah, this is a two-fold answer, and another great example of true life bleeding into fiction. 🙂 I live in a mid-sized, Midwestern city that was very dependent on the auto industry. When the recession initially struck, many automotive plants were forced to shut down, leaving families without jobs or a viable trade. And while things are improving, the contrast still feels stark between those whose livelihoods were hit hardest, and those who were not. The second part of my answer comes from my own upbringing. My parents divorced when I was three. One household was fairly stable financially, but the other straddled the line of poverty. So in essence, this gave me not one, but two unique lenses to view the world.

MS: Summer of Supernovas is a love story. What drew you to writing about relationships? What about budding romance is essential to early adulthood?

DW: To be sure, I am the sappiest of saps. I just love . . . love in all forms! So I knew I wanted to write a story that not only centered on the complexities of romantic love, but also familial and friendships. As for those early adulthood budding romances, there are few things more intoxicating and heady. I swear I had cartoon hearts beating out my eyes for most of my teen years. The highs are so high, and the lows are subterranean. But I think having these experiences (good or bad) helps pave the way for future relationships, and learning what you want or don’t want from a partner. That said, I’m a HUGE advocate for being your own prince and being your own princess. And when you find the right person, they don’t fill a hole. They make you shine brighter.

MS: Finally, many Book Club Babble readers are also writers. We’d love to hear how you moved from “aspiring” to “published” author!

DW: I think it was the goat sacrifice. KIDDING!!! But it would be fabulous if I had a silver bullet answer to this. For me, it boiled down to a series of events that aligned . . . dare I say, like the stars? Entering contests like the RWA’s Golden Heart® (along with other chapter contests) was absolutely instrumental for getting me in front of agents and editors. In addition, I got valuable feedback that strengthened my writing, AND forged amazing lifelong friendships. So many wins! Ironically, the moment I stopped defining my success by whether or not I got published, was precisely the moment it happened. My gratitude could wrap this globe several times over! 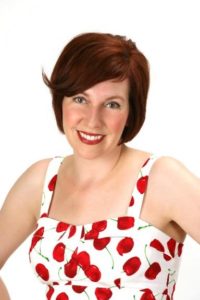 has held an eclectic mix of professions—from refueling helicopters for the U.S. Army to recharging bodies and spirits at a spa—but her most beloved career is being an author. She lives in Michigan with her husband and two tuxedo cats (who overdress for everything). SUMMER OF SUPERNOVAS is her double RITA®-nominated debut novel and has been translated into five languages. It can be purchased here or wherever you buy books.