Liana Cohen seems to have it all: a meaningful job as a public defender, great friends, and a loving boyfriend—but as she approaches her thirtieth birthday, she feels lost. Once an idealistic lawyer, she’s become jaded, having lost faith in herself and the system.

When Liana’s assigned to represent the charismatic Danny Shea, she may have found the client she can truly believe in—someone who can reinvigorate her passion for her work. As Liana gets to know Danny, their unique attorney-client relationship forces her to confront fundamental questions about truth, faith, and love.

Book Club Babble is happy to sit down with Unreasonable Doubts author Reyna Marder Gentin and learn more about her debut novel. 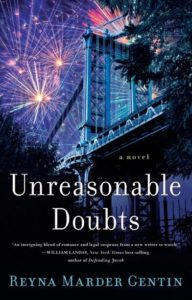 Kate Newton: At the beginning of the story, Liana seems to be at the point of burnout in her relatively young career. To what degree does Liana contribute to her own burnout? Did she perhaps choose the wrong career path? Or is she just going through the throes of exhaustion that many lawyers feel?

Reyna Marder Gentin: I would say that Liana is more disillusioned than burnt out. She took the job because she genuinely believed she could be passionate about representing indigent defendants. What she found after a few years is that defending people who have committed heinous crimes is morally challenging, even when a lawyer knows that there is value in keeping the criminal justice system honest and making sure every defendant gets a fair shake. So Liana is not so much exhausted as she is grappling with whether she is using her talents to represent the right sort of clients.

KN: Liana’s friend Deb often plays the role of advisor. At one point she accuses Liana of being jealous of the younger “hopeful” attorneys. Is she on the right track with this theory?

RMG: Yes. Deb is often the voice of reason in the novel. She recognizes that what Liana has lost is a sense of hope and purpose, and that it is this feeling of being lost that sometimes causes Liana to despair and even to lash out. The younger attorneys still come to work each day with a sense of mission, and Liana has lost that. Until Danny.

KN: Certainly you’ve been asked this before, but especially since you’ve worked in the field that you write about, are any characters drawn from real life, or are they composites of real people?

RMG: Many of the characters share traits with people that have played a part in my life. Certainly, the mother, Phyllis, is a strong woman who finds herself widowed and living in suburbia at about the same age as my own mother, although Phyllis and my mother take different paths. The personal trainer, Marta, is inspired by the woman who whips me into shape.

KN: Rabbi Nacht is another advisor for Liana, often a sounding board. At times he seems almost a father figure, but there seems to be a hint of something more. Is she perhaps close to the type of man Liana hopes Jakob could be?

RMG: Wow – great question and one I had not thought of at all before! Rabbi Nacht is a unique friend for Liana because he is able to counsel her in a way that is faith-based, but also very much meets her where she is in terms of belief and observance. He is wise and kind and non-judgmental. I had not thought to compare him to Jakob, nor to hint at anything more!

KN: Why do you think Liana is so drawn to Danny Shea? Does he have something Jakob is lacking, or is it more of the forbidden quality of wanting who you shouldn’t want?

RMG: Liana is attracted to Danny Shea on a number of levels. It is not so much that Jakob is lacking, but the contrast between what the two men seem to offer Liana. Jakob is solid and appropriate and loves Liana, but he has her in a particular carved out place in his otherwise very ambitious life. Danny seems to be offering something more devotional and all encompassing—a love with no boundaries, where Liana will always be at the center. Danny also enters Liana’s life when she is at a low point professionally, and provides that hope we spoke of earlier—the hope that Liana will actually help someone innocent who deserves her help. Finally, there is that notion of the “bad boy” at play—as much as she believes that Danny is innocent, he is not a conventional choice for her—the scent of danger attracts her.

KN: When Liana decides to visit Danny in prison, does she cross some sort of ethical line? After all, lawyers often visit clients in jail where they can spend more time and go over the case privately. She certainly has every right and some might say an obligation. But is it her motive that is lacking in integrity?

RMG: Liana’s visit to Danny is more of a lapse of judgment than an ethical violation. There is of course no reason that an attorney can’t visit a client in prison. The issue here is that Liana has no real professional reason to make the visit—rather she is looking to satisfy her curiosity regarding whether Danny will “seem” innocent to her in person. I wouldn’t say there is anything lacking in integrity. She’s human, and she makes mistakes.

KN: Liana is often put in the position of having to attend dinners with Jakob and the partners at his firm. But it seems that these opportunities cause Liana to learn some things about herself that she might not otherwise focus on. Do you agree?

RMG: Yes, I agree. I think that when she is forced to “confront” the views that the corporate attorneys have of the value of her chosen work, which are negative or hostile, she rallies to her own defense. On the flip side, sometimes the perceptions of Jakob’s colleagues and boss cause her to dig deeper into her own views of being a defense attorney and all that it entails.

KN: Without giving too much away, Liana makes two rash decisions about her job and her relationship. In retrospect, were these wise choices? Or were they reactionary based on events occurring at the time and the emotions she was grappling with?

RMG: I don’t think any of the decisions Liana makes regarding her job or her relationship were rash. I think she made the best decisions that her emotions would allow. That she might make different decisions down the line just means that she has grown from when we first meet her.

KN: Thanks so much for speaking with us. One last question: what’s next? Do you have a future book planned we can look forward to?

RMG: Thank you for the opportunity! Yes, I have a manuscript for a middle grade novel entitled My Name is Layla l that I am currently shopping around, and I am also beginning work on a new novel—stay tuned! 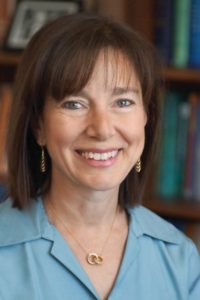 REYNA MARDER GENTIN attended college and law school at Yale. For many years, she practiced as an appellate attorney representing criminal defendants who could not afford private counsel. Reyna studies at the Writing Institute at Sarah Lawrence College, and her fiction and personal essays have been published in The Westchester Review and online. She lives with her family in Scarsdale, New York. To learn more, please visit reynamardergentin.com.