Patrice Vecchione is a poet, visual artist and essayist. Living near the coast of Carmel, California, she fell in love with nature. Her book Step Into Nature is an exploration of how creativity and nature intersect – how nature can inspire creativity, and how a creative mindset can illuminate the beauty of nature. Step Into Nature is full of poetic observations, and the small and abundant ways all of us can embark on a more creative life. It has been described as “230-plus pages of pure aliveness.”

We are thrilled to discuss the book, and more, with Patrice Vecchione.

Your book is, in part, about your love affair with nature. This starts, quite simply, when you “walked into the forest,” not for “joy and inspiration,” but for exercise. Which made me wonder—why then? Was there something occurring in your life, at that time, that rendered you particularly receptive to the beauty of nature?

PV: I’d been a distant bicyclist for years and loved being out in the air but due to arthritis in my neck I had to give up riding; the pain afterwards made it not worth the joy and exercise. So what was I going to do, join a gym? That would have had me indoors way too much for who I am. Instead I took to the woods. It was one of those silver lining experiences. I was taken entirely by surprise at how nature began to quickly work on me. My life and my imagination have been forever expanded and deepened. Yes, I go there for exercise, but now I go there and receive so much more.

Humans are migrating, more and more, to cities. Some cities, like New York, have large parks in their borders that can, in parts, feel remote from the built environment. But these leafy areas are rarely unoccupied. How do you think the presence of other people, especially strangers, affects the ability to be in touch with and responsive to nature? While bits and pieces of nature are everywhere, even in cities, if you look for it, do you think it’s possible for city dwellers to find the same inspiration in nature as those who can literally be surrounded by it?

PV: Fabulous question! Step into Nature includes a chapter about solitude because it’s vital for many of us in order to develop creatively. For some of us, there is nothing like it—in nature or elsewhere—to stimulate the imagination. In general people these days don’t get what looks to me to be enough solitude. When we’re on our devices, even when we’re alone, we’re not really alone. I leave my cell phone in the car or in my pack with the volume off and forbid myself from looking at it in order to be truly alone. 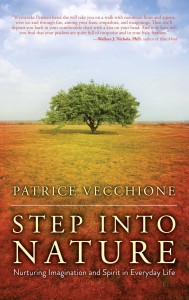 City dwellers can be very adept at tuning out others nearby; that’s an important skill, especially for introverts or lovers of solitude. I’ve spent a fair amount of time in “solitude” along the Embarcadero in San Francisco or in Central Park in New York with others nearby. Even little pockets of aloneness can be transformative and can positively influence imaginative process. That said, there is nothing like the experience of being in a place where there is enormous space around you that’s comprised only of the earth and her plants and creatures. For me, that’s become pretty close to necessary.

Implicit in your question is also an issue of safety. Are there city-nature places where one can feel safe and comfortable to let down the rigor of outward attentiveness enough for the soft flow of imaginative thinking to take hold?

You have taught poetry to young children for a long time, and you state in your book that, in the last few years, the children have become much less imaginative. That instead of seeing trains and faces and monsters in a cloudy sky, they simply see clouds. I found that depressing to read. This brought to mind many possible explanations: that public elementary schools have become more test-oriented and academic; that, there are more video games and TV aimed at children; and, that many children’s lives are overscheduled, leaving little time for unsupervised play, especially in the outdoors. What are your thoughts and theories on why children seem less imaginative? Any ideas on how to change this?

PV: When schools (No Child Left Behind, a heavy focus on testing, etc.) convince kids that there is only a single correct answer to a given question this limits freedom of thinking, especially imaginative, playful, explorative thinking. Childhood should be a time of “what if.” “What if I put this shade of blue beside that shade of orange; what will it look like; what will happen?” Of course, there are certain questions to which only a single correct answer applies but hardly is that true of every or even most questions. In life, there are often many “right” answers. The skill required to think of them is essential.

There’s the issue of electronic devices that certainly have their place, but not too soon in a child’s life, in my opinion. Even Mr. Technology himself, Steve Jobs, didn’t allow his young kids to use the stuff. I’ve got a friend whose teenager was texting her friend about getting together. When they met up they found it impossible to talk so reverted to communicating via their phones!

Then there’s, as you mention in your question, the need to move in space in unstructured ways, to learn through doing and making mistakes.

I know of poetry and paintings and nonfiction where nature is the only subject, where nature is depicted or evoked on its own terms. There are many novels involving nature, but when I think of novels and nature, it seems that nature is always featured in relationship to a human’s story. Either nature is the antagonist to a human’s struggle (like Old Man and the Sea) or an inspiration or catalyst for humans’ lives and journeys (like My Antonia), or a metaphor for human life (like The Call of the Wild.) In such novels, nature no doubt plays a critical and real role, but I was wondering if you knew of any novels where nature is depicted independent of a human story? Or is there something about the novel form, in contrast to poetry, the fine arts and nonfiction, that makes this difficult and unlikely to sustain? Even in poetry, do poems about nature tend to anthropomorphize nature?

PV: I don’t know of any novels in which nature is the main character without human accomplices. It’s the whole plot thing, I think, though, of course, there’s lots of action and tension in the natural world. And then there’s the issue of point of view. You might take a look at the work of Franklin Russell. His book Watchers at the Pond is nonfiction but it offers drama reminiscent of fiction.

Poetry, on the other hand, doesn’t only anthropomorphize nature. It can also serve as a backdrop for the narrative or as a player in the poem when a poet writes about firsthand interactions with nature. Poets have the greatest ability to describe nature with the freedom that form gives and its tendency to slow things down. An entire poem may occur over a span of mere moments. Some of my favorite poets who feature the natural world in their work include Robert Hass, Jane Hirshfield, Antonio Machado, Emily Dickinson and Federico García Lorca.

You write, “Whenever an animal or plant is lost to the earth, we each lose something…” To me, this idea has intuitive appeal—it just does seem to be a loss that a particular species will never exist again—but, when thinking about the natural history of the earth, it also seems impossible to fully embrace. Long before humans existed, animals and plants were dying off, or morphing into something different. With humans out of the equation, that seems to be the natural process on earth. Is it really a loss to us if one plant is replaced by another? Is it even possible to mourn the loss of every animal or plant species? Isn’t the difficulty in disentangling the damage that humans cause—often unnecessarily—from what is a natural process of the earth’s ecological system evolving? Do you think there is any simple way to balance human needs with damage to our environment? It is easy to condemn damaging the environment for no good reason, or for small gains, but is there a good way to balance it with more serious human gains, like lifting more humans out of abject poverty?

PV: Of course, it’s not possible to mourn all losses—such abundant grief could undo us. There is always joy too and though it may not counter loss all the time, it does offer another truth that’s just as important. Whatever the cause of the loss of a particular species, there is loss nonetheless—how this species moved, what that one ate, the call of a particular bird, the fur pattern of that one, etc.

The more time I spend in nature the more I recognize the personalities of individual wild animals. Some jays will call back to me while others won’t. One summer at Jacks Peak Park there was a squirrel who played hide-and-seek with me. Was she truly playing that game? I can’t say, and don’t even know it was actually the same squirrel but in a particular part of the park nearly every time over one summer that I walk there, a squirrel would come down from a tree and run ahead of me and when I go close, off she’d go around the next bend, only to jump out again.

My point is to encourage an increase of awareness and sensitivity, empathy, imperative in the process of making art (and being human). I’d like to encourage a softening up to the earth, to recognize and celebrate our connection to nature, to experience fewer boundaries, for the sake of the planet and toward an increase of our own tenderness and growth. What matters to me is that we realize our imperative relationship with the earth, as we are nothing without her.