Participation in a clinical trial offers Greg Owens the opportunity to end his years of debilitating back pain and his reliance on prescription pills. But after spending a few days at the eerie facility, Greg learns that the newly cured patients now suffer from an entirely different kind of pain, and the side-effects are deadly. Book Club Babble is pleased to present this chat with Marty Thornley, author of the edge-of-your-seat psychological horror novel, Painless

Kate Newton: Congratulations on your debut novel! I understand that you once worked in the film industry, and that Painless began as a screenplay. You’ve written openly about how your brother’s overdose led you to revisit this story in a new art form. How did you go about transitioning the initial script into a novel? Is Painless something you might still plan to turn into a movie at some point? 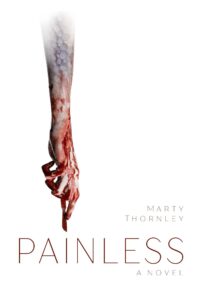 Marty Thornley: The first reason I even thought to attempt a novel was simply to get back into writing. I had no interest in starting a new screenplay from scratch, mostly because a screenplay is just a blueprint and not a finished product. I still liked several of the stories I had written as screenplays and decided to reread a few and see if any felt right to adapt to a novel—something I had never attempted before.

Painless was the last thing I had written, and I always considered it my most complete story. As soon as I started reading it, I was reminded of how intertwined the plot and themes were with addiction and mental health. But, in a screenplay, there is minimal room for the backstory and the inner thoughts of characters. If it were going to be a novel, I would have to develop each of the characters’ pasts and see things from their perspectives.

The main character, Greg, was only described as having a back problem. The fact that he had maybe taken some pills was only hinted at and mentioned just once or twice. Certain details from my brother’s life helped fill in Greg’s story but also showed up in other characters like Cesar, the guy with a sense of humor and a bad temper, or Franky, the guy who always had a pocket-knife on him.

I would love to see this end up as a movie. Or maybe a series, now that I am working on a follow-up! The second book, Teeth, is also based on one of my old screenplays. The irony of writing screenplays that never got made, sat on a shelf for years, got adapted into novels, only to have someone ask to adapt them back into a film would entertain me to no end.

KN: Although Greg is considered the protagonist, you write from several different points of view. Was there a reason for doing this, as opposed to staying in Greg’s point of view throughout?

MT: The story starts as an ensemble, with characters overlapping and sharing scenes. But, eventually, they spend a lot of time alone. So there was the choice to write from either third-person omniscient or third-person limited perspectives. As a narrator, I could know everything and tell everything if I wanted. I had a few reasons not to take that route.

For one, I wanted the characters’ alone moments to be from their point of view, not mine. They do some disturbing things to themselves and to each other, and it has to make sense to them. It has to be entirely logical. I don’t think that is possible without writing from their viewpoint.

Second, it adds suspense. In some scenes, I could have chosen any one of the characters’ POV, but usually only one was really going through something at the moment.

Third, it adds suspense. I could write a scene as one character who is flipping out in their head, thinking about hurting themselves, or killing everyone, etc. Then you start the next section from the other character in the room who has no idea. They think they are safe. But the reader already knows the other character is crazy.

That is why I decided I could never write anything from Dr. Menta’s point-of-view. He has to be a complete mystery, a complete unknown. It would either give everything away or be complete nonsense. I’m still not sure if his head is filled with a logical plan or just white noise, or maybe rambling and broken thoughts.

KN: There are so many different and highly nuanced characters. Was it easier to get into certain characters’ minds as opposed to others? Are any based on real people, and do you have a favorite character?

MT:  I very purposely wanted a diverse cast, both because that would make sense for a trial like this and because that is how a production company would want to fill out a cast anyway. So, I mixed up ages, races, genders, etc. I had them come from different areas, different lifestyles. Then I matched them up with different maladies that would have driven them to the trial: old injuries, lupus, fibromyalgia, etc. On top of that, I added a mix of the emotional issues that they might have: anxiety, OCD, depression, anger, and so on.

By the time those characteristics were all lined up, they were completely distinct characters, so it was fairly easy to get into any one of them and let them drive. Every character at some point did something I did not know they would do until I wrote it. The best example of this was with Cesar, who was probably the most fun to write. In the scene where he trashes the cafeteria, I had little to no idea what he was going to do.

KN: People who suffer from chronic pain will often do anything to make it go away, explaining why those so afflicted might be attracted to a clinical trial that would make all pain vanish. Yet as treatments progress, Franky and Cassidy muse that pain is “maybe not good, but necessary.” They don’t seem to learn from this realization though, as they engage in really destructive behavior. Paula is another character whose personality quirk, a kind of OCD tendency, leads her down a destructive path. Is it their mental pathologies that make him seek out these experiences?

MT:  For Franky and Cassidy, I tried to draw a connection between them through their past in the club scene and music industry: drugs, having fun, experimenting, one-upmanship. Their dialogue about pain may make sense, but I also wanted it to be a couple stoners talking faux-philosophical nonsense. Let’s face it, they were not the smartest of the bunch. So as the effects get worse for them, that same cycle gets worse and worse. Let’s experiment. If you can do that, I can do better. I think they were just having fun, the same way they might have done a couple lines at a party and gone skinny-dipping.

Paula was a more direct example of a mental health issue being exaggerated. She is another example of how characters take over in the writing process. In the screenplay, she still did all the same things, fingernails and all. But had no concept of what was in her head. As I wrote the scene where she was wheeled out of the surgery, she started noticing architectural details, and all of a sudden her entire story was unveiled. That lead to her observations of the paint in her room and the windows in the cafeteria. Eventually, she turned that critical eye towards herself.

KN: How would you describe the relationship between Dr. Georgia and Dr. Menta? Is he her Svengali? Or is there more to it?

[SPOILERS—SKIP IF YOU HAVE NOT READ]

There is a gap between Dr. Menta as a young boy and the time he is a doctor at the trial. Somewhere in between certain things happened that we know about; he perfected this surgery (almost), he met Georgia, they performed a previous trial (that apparently also ended badly), and at some point, they performed the surgery on themselves or each other. Georgia also confesses in the one scene from her POV that Dr. Menta chose his name for himself, so we don’t even know his real name.

I see her as a prodigy and a brilliant go-getter student who tagged along with someone she decided was a genius. I don’t know that Menta is a Svengali, so much as just a mad scientist happy to find someone who doesn’t think he is crazy, someone just as Machiavellian as he is, willing to let patients die in order to complete their mission.

KN: I’m sure I’m not the first to mention that your book has a certain Stephen King quality to it! But I don’t want to assume he’s one of your influencers. Would you care to share who your favorite writers are?

MT:  Thank you! You could not give me a better compliment! He was definitely my earliest influence. I devoured all his books throughout my teenage years. They inspired me to write my own short stories, all horror, and suspense. But then I watched a Hitchcock film and immediately decided I wanted to be a filmmaker.

From that point on, all my influences are in the film world: Alfred Hitchcock, Stanley Kubrick, David Lynch, David Cronenberg, Martin Scorsese, Takashi Miike, early Francis Ford Coppola, the Coen Brothers. Beyond the big names, it is just suspense, film noir, horror of all kinds.

KN: Lastly, what’s next? Do you have any new works planned? Novel or screenplay? Perhaps a sequel to Painless?

MT: I am currently working on a follow up to Painless, called Teeth. It takes place over two timelines. In one, a young girl witnesses a terrible tragedy. In the second it is 20 years later, and she is a young woman living in Los Angeles. The main story follows the later timeline, where she gets involved with a cult that worships pain and sacrifices body parts to creatures that live in the basement. It is going to be crazy. There are some obvious thematic crossovers with Painless: addiction, mental health, PTSD, and, of course, pain.

But I am excited about some of the differences too. While Painless was gruesome in parts, I never considered it scary. Teeth will be scary. There are multiple sequences that freak me out. And the last scene, the last line, flips both books on their heads.

Oh . . . And there will be a couple cameos by characters from Painless!

KN: Thanks so much for giving us a chance to have a look at this memorable thriller. I can safely say readers may have a hard time putting it down but also a hard time getting to sleep! 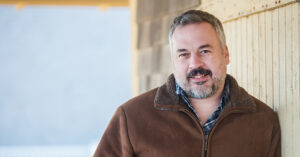 Marty Thornley spent 15 years in the film industry creating screenplays and short films, and 10 years as a web developer and software architect. He returned to New England after years spent in Los Angeles, dusted off one of his screenplays and turned it into this tantalizing debut novel. Painless is sure to delight horror and medical suspense fans while provoking a deeper conversation about addiction and mental health.