Against the backdrop of the Adirondack Mountains, Laurel Saville’s North of Here immerses readers in the story of a back-to-nature cult, delving into the complex relationships that can grow between damaged souls and their would-be rescuers. Told from the alternating perspectives of its four main characters, the book highlights both the power and the limitations of love. We recently met with Laurel to discuss her novel and the creative process.

Kate Newton: Thanks, Laurel, for taking the time to speak with Book Club Babble about your new book, North of Here. You’ve written a number of pieces—fiction, non-fiction, essays, and corporate material. How did you first come up with the idea for this story? 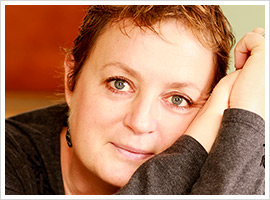 Laurel Saville: My work tends to start with a single scene or a vague sense of a character. Then I just plunge in and start writing and see where the characters and situations I put them in takes me. I am not a writer who plots out my stories or books in advance—my process is to write my way through things. This book began forming when I lived in Central New York State. As I drove through the pitted, winding back roads, usually on my way to one or another of my favorite hiking trails, I passed many Amish communities as well as the homes of other people who live off the grid, not in a groovy sort of way, but in a rural poverty sort of way. I began wondering what it would be like to be raised in an anti-modern environment. These questions began to slosh around with some of what I’d seen growing up in the hippie heyday of Los Angeles and with my experiences with various “Trustafarians” I’d met when I lived near Burlington, Vermont. Then all this got mixed into what I knew were the wide ranging and often conflicting concerns and interests that are so much a part of the Adirondack Park area. This strange stew of questions, ideas, and experiences became the book, North of Here.

KN: One fascinating feature of your story is the transformation that the characters Darius and Miranda, in particular, undergo over the course of the book. Sally changes too, but to a milder degree, becoming less hard-edged and cynical. Dix, however, seems relatively unchanged throughout much of the novel. Was it your intention that Dix remains the most stable one of the four, and if so, does this in any way relate to the theme of the book? 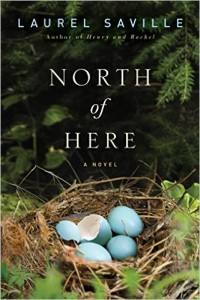 LS: Dix is certainly stable, but one of the things I was exploring was the limits of “stability” when it comes to loving someone who is, shall we say, less stable. He is a kind, competent, loving man, and yet those skills turn out to be far less useful than we’d hope when it comes to helping another person who is lovely, but also somewhat lost, depressed, confused, and without innate coping mechanisms. There are limits to love’s effectiveness and protective abilities, no matter how deep and well-intentioned the underlying emotion may be. I also think Dix does change. He is faced with two relationships— one romantic and the other parenting—that test his competency and leave him with a lot of self-doubt. Sally is the one who sees him fully, while others are content to keep him in the box of “nice, practical, dependable, good with tools” sort of guy. The narrow way others see Dix says much more about them, than him, of course. As the saying goes, “We see the world not as it is, but as we are.”

KN: Darius’s transition from prep-school boy ne’er-do-well to cult leader was particularly subtle, and powerful. What was the impetus for him to change in this way?

LS: My father once said that you have to be very comfortable to be a revolutionary or a radical. Others have said that revolutions only come from the middle class because if you’re worried about survival, you’re not likely to have the resources required to go out and try to change the world. This is one of the themes of the book, which also grew out of my acquaintance with plenty of people who are, to a lesser degree, like Darius. They make claims for themselves as bad asses or social change agents or simply indignant uncoverers of what’s “wrong”. While some of this is noble and admirable, a lot of it comes from a naiveté and narcissism that is only possible when you have a variety of comforts and privileges. Sally tries to make this point to Darius, but he is incapable of the empathy required to understand what she’s driving at. I think the thing about Darius is that in the end, he doesn’t actually change much at all. He just expresses himself in a variety of ways that seem quite different from the outside but come from the same core of his character.

KN: Do you know any real-life Dariuses? Is he based on someone real, or does he come from your imagination? A conglomerate?

LS: As mentioned above, I’ve met people who definitely express different aspects and degrees of Darius’s personality. But he is for sure a composite and also a character who took his own, unique shape during the writing process. In addition, I do know people who lived on communes and did a lot of reading about communes, cults, and their leaders—fascinating to see the patterns and commonalities between them all. So he is a product of my imagination, informed by my experience and research.

KN: SPOILER ALERT We are told that Miranda dies, yet we as readers don’t see her actual death, nor a body. I have to admit, I kept waiting for her to walk through the door, particularly at the end when Sally and Dix return to the farmhouse. Is there a reason why you decided to have Miranda’s death “off-stage,” so to speak?

LS: There are two reasons for this major event to happen “off-stage.” The first is that the hidden aspect of her death is central to the plot. It is a key problem in the book that Darius keeps her death secret and neither Sally nor Dix nor anyone who might have intervened was there to help or witness her passing. The other reason I wrote it that way is literary. I find it very effective as a reader to have some of the drama left to the imagination. Flannery O’Connor was a master at this. Two people walk into the woods. There is a sharp retort, a flock of birds flies into the sky, and one person walks out. So much more powerful and chilling than to have every detail of that particular murder spelled out.

KN: You painted a very clear picture of the setting of the Adirondack Mountains. It was a great location for the goings-on at the farmhouse—the combination of the idyllic setting, yet the potential for mystery and danger. More than anything, it made me want to visit! Was this the location you had planned for the setting originally? Why did you choose it?

LS: The setting was inextricable to the story. The Adirondack Park is like no other. At 6 million acres, it’s one of our largest parks in the United States, but unlike other preserves, about 50 percent of the land is privately owned and the area is dotted with small towns and villages. This situation creates a very interesting mix of competing and complementary interests between preservationists, locals, seasonal visitors, environmentalists, hikers, hunters, regulators, skiers, boaters, etc. On the best of days, it’s an uneasy balance. Everyone has their own ideas about how the resources of this very rugged wilderness “should” be utilized. And each group has very different ideas about how best to engage with wild lands. The locals and the visitors both need and resent each other, and many people both need and resent the land itself. For me personally, it was and is a place of stunning and humbling natural beauty where I spent countless hours hiking, contemplating, and simply enjoying the scenery.

KN: I’m sure you’ve been asked before about switching between different points of view. It’s hard enough for most writers to accomplish, yet you manage to do it with four different characters. Did you have a particular technique for achieving this? I’ve heard some authors write one character’s sections at a time in order to make sure they are being consistent.

LS: North of Here has four main characters, but my previous book, Henry and Rachel, is written in interwoven, first person narratives of eight different characters, so that was good POV practice. I suppose writing “in character” is a bit like acting: I simply try very hard to inhabit a character and see things as they would. As I write and edit, I’m constantly checking myself and making sure I’m in that character’s mind, body, soul, perspective, even their shoes! It’s really a practice of both craft and empathy. It also helps to have, as I did, a very good editor who was great at pointing out my occasional point of view “violations.”

KN: To what degree are you a story planner? Do you plot out each chapter in advance, or do you use a more free-form, stream-of-consciousness approach?

LS: I am to no degree a story planner. At least not in advance. Once I get deeply into the work, I will then pause and start to nail down dates, names, ages, timetables, events, and the like. But at first and to a large degree throughout, I’m a “feel my way through” kind of writer. I love just seeing where the characters themselves take me as I get to know them through the process of writing about them. I suppose there is more waste this way as I often chuck out huge sections of writing that ultimately don’t work as the final narrative arc settles into place, but I see that as a necessary part of the messy craft and creative process.

KN: Is there anything else you want to tell us about your creative process?

LS: As much as I describe it as a messy process, it’s not ad hoc. I spend huge amounts of time thinking, taking notes, reading background material, walking in the woods, and trying to figure out who my characters are and how they got into whatever predicament they’re in. It’s like cooking—I may not follow a recipe in the moment of making a meal, but I’ve read plenty of cookbooks and chosen my ingredients carefully and imagined the flavors I am hoping to create.

KN: I understand you’re working on a new novel. Will you let us know what we can expect?

LS: Since sending North of Here off to my publisher, I have been working on a novel that is set in the future. It’s got a bit of sci-fi adventure and explores issues related to technology and relations between creatures, human and otherwise. But honestly, in the last few weeks, I find myself thinking a lot about Dix’s daughter, Colden McComb. North of Here actually began with a vision of her as a young teenager, and then morphed as I began writing about who her parents were, ultimately becoming their story. I’m finding myself wanting to go back to that earlier vision and tell the story of the young woman she might become. So there may be a sequel of sorts taking shape in my mind.

KN: Thanks for taking the time to talk with us, Laurel. We look forward to your next book!