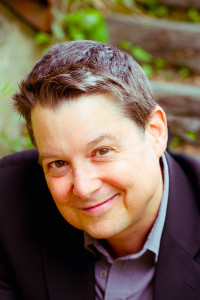 I met Jon McGoran at a writer’s conference last summer and quickly became a fan. He is the author of Drift and Deadout, from Tor/Forge Books, and their sequel, Dust Up, due out April 2016. These novels, featuring Detective Doyle Carrick, weave very real environmental/biotech issues into compelling stories with authentic characters, page turning plots, and ideas that are scary enough to keep you up at night.

Jon spent twenty years writing about food and sustainability – first as Communications Director at Weavers Way Co-op, and editor and publisher of the monthly newspaper, The Shuttle, and later as editor-in-chief of Grid, a magazine covering issues of sustainability. With his current fiction series, Jon’s found a compelling way to merge his passion for writing thrillers with his commitment to an informed conversation about GMOs, sustainable agriculture, and other environmental issues.

In addition to being well spoken, well informed, and a fantastic writer, Jon’s also a really good guy, willing to offer me advice and encouragement long after that conference ended. You can follow Jon on Twitter and Facebook, and visit his website www.jonmcgoran.com to learn more. It’s a pleasure to feature him on BCB today!

TL: Drift and Deadout, your novels featuring Detective Doyle Carrick, are ecological thrillers. One focuses on GMOs and the other on Colony Collapse Disorder. Both are filled with relevant scientific concerns. Is it your intention to bring more public awareness to these issues through your fiction writing, or are you just trying to tell a good story?

JM: My main concern is definitely to tell a good story, but I think that even if it wasn’t, even if the themes of the book were of primary importance, I wouldn’t be doing them justice if I surrounded them with a story that made sacrifices in service to those themes. Apart from anything else, no one is going to consider your themes if you hide them in a story that is so clunky and pedantic no one would want to read it. For me, this wasn’t such a big sacrifice, because I think the ideas in Drift and Deadout, and now in Dust Up, really lend themselves to great plot, great conflicts and tension. They’re not grafted onto the plot, they’re parts of the plot. I think the topics of how life and food and scientific knowledge are becoming increasingly defined and controlled by biotechnology and huge corporations is fascinating in and of itself, but those ideas are also a perfect backdrop for the types of thrillers I like to read and write. That all said, one of the things I find most alarming about the revolutionary changes in food over the last few decades is how extreme and widespread the changes have been, and how few people are really aware of it. So if I spark some conversations about these things, I think that is an important benefit, and something I am proud of.

TL: So, you obviously aren’t a detective, but Doyle Carrick is a well-drawn, authentic feeling character. What’s your process for researching and developing a character like this?

JM: Well, I’ve done plenty of research and spoken to plenty of cops, but really, I think the most important part of being a writer is having the empathy and the understanding of and curiosity about what it means to be human so that you can put yourself in any character’s shoes. Obviously your characters have to be believable in whatever specific roles they occupy, and research into those specifics is important to nail it, but much more important, I think, is that the character is believable as the human being you imagine him or her to be. You need to do both, of course, but Doyle isn’t going to be believable as a detective if he isn’t believable as a person first.

TL: With this series, do you have a sense of how many books you’d like to write?

JM: I hadn’t really thought past the third book, but I would love to keep writing them. Doyle is a really fun character, there is no shortage of topics and plot ideas I would love to explore with him. I am working on a couple of Doyle Carrick short stories right now, one standalone, and one in which he will team up with Jonathan Maberry’s Joe Ledger character for an anthology Jonathan is putting together. That will be insanely fun! And I do have several ideas for a fourth book and beyond, but I’m working on several other projects right now, so we’ll have to see what happens next. But I’d love to write another Doyle Carrick book. 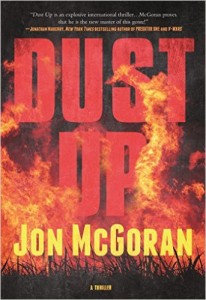 TL: Can you give us a sneak peak into Dust Up

JM: Sure! Dust Up follows a lot of the themes in Drift and Deadout, but it is a bigger thriller, a little more explosive, and on an international scale. One of the things I really like about it is that it starts off small and intimate —Doyle and his girlfriend Nola awaken in the middle of the night to frantic banging on their front door. As Doyle rushes to see what’s going on, the sound is replaced by gunfire. When he opens the door, a young woman is driving away and a man he has never met is dying on his front steps. But from there it just grows and grows, expanding in different directions. The homicide investigation is focusing on the domestic angle, but Doyle soon realizes something else is going on, and it expands into a criminal conspiracy with global implications that has already taken dozens of lives and could endanger millions. The action is immediate and up close, but it deals with issues of what happens when big corporations bump up against each other and against sovereign nations.

TL: What does a typical workday look like for you?

JM: It varies a lot, depending on what I am working on and what part of the project I am involved in. Generally, though, I get up early, usually around 6:30, although sometime later if my son isn’t in school. I sometimes get up at 4 or 5, if I can’t sleep, and work a few hours early in the morning, and then take a nap later. I’ll usually work through the morning, then for a few hours in the afternoon. I’ll usually stop around five and start to get dinner ready. If I’m writing a draft I might just go back to work after dinner, but usually I will watch a little TV, spend some time with my wife, read a little. Again, depending on where I am with a project, I will often go back to work around 11 p.m. and stay up until 1 or 2 or even 3. I try not to do too many late nights and early mornings back-to-back, but it’s nice to be in a position to be making my own hours, so if I’m on a roll, I can just go with it and catch up on sleep later.

TL: How long does it take you to bring a project to completion, from the first word until your editor signs off on the final draft?

JM: It can vary a lot. The way the D.H. Dublin books were contracted, I had to write all three in 18 months, so that’s how long they took. I think a year is a good amount of time for a book, although I have taken longer and I think that’s fine. Also, that doesn’t mean I won’t write more than one book in a year, but I think spending time away from a project and coming back to it is important, and you can’t really rush that part of it, although sometimes you have to.

TL: I know you are an “outliner.” I think I’ve heard you say this, and I know you’ve mentioned it in other interviews. Has there been a time, though, when your plot, or one of your characters, has seriously gone off the rails and taken the story somewhere you didn’t intend?

JM: That has only happened to me two or three times during every single book I’ve ever written! Seriously, though, for me, outlines are very important, but they are tools. They work for me, not the other way around. An outline can help keep you on track, but if you feel like the book wants to be going in a different direction, and you like that direction, there’s nothing to stop you from going there. I usually alter my outlines at least two or three times during any given project. But I don’t just keep writing until the end and say, “That turned out differently than I expected.” I pause and revise the outline so it reflects the new vision for the book. That make is a lot easier to be sure the pieces all still fit together, and the book works as a cohesive whole.

TL: Thanks so much, Jon! It’s always a pleasure, and I’ve already pre-ordered Dust Up!