What are the odds of becoming a best-selling author? Well, according to blogger Kristen Lamb, mathematically speaking, the same as your chances of being mauled by a black bear and polar bear—both on the same day.

But it’s not just luck, it’s hard work, timing and skill. Jessica Knoll’s Luckiest Girl Alive delivers just that and much more. “Sharp,” “page-turner,” “smart,” and “sexy” are just a few of the adjectives that top notch reviewers have used to describe Knoll’s debut novel.

Knoll’s novel has also been optioned by Lionsgate, with Reese Witherspoon and Bruna Papandrea as producers. Move over Oprah, it looks like Reese Witherspoon is starting her own book club and she is bringing fresh and interesting characters to the big screen—and we couldn’t be happier. Here at Bookbabble.com we are proud to bring you Jessica Knoll, the writer behind this summer’s juiciest read. 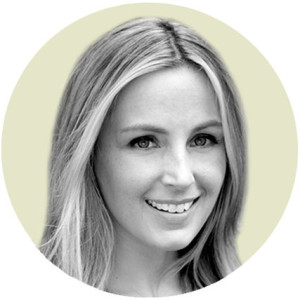 Let me begin by saying, thank you for writing such a carefully constructed piece of crime fiction. Rarely does such a great read raise such powerful and timely issues. Critics have hailed your novel as being in a class all of its own.

In her review of your book, Elena Avanzas Alvarez [LA Review of Books] suggests that your book is a new guide to millennial femininity. She starts her essay by writing:

“Every day we wake up and put on an outstanding performance. Our gender, our social class, and our relationships are carefully crafted to meet a set of expectations … Especially in the realm of crime fiction, where the reinvention of self is prelude to conflict, asserting control over that performance becomes the centerpiece to great stories — and even greater social commentary.”

I appreciate how a significant part of your novel is about Ani’s “performance” and what it says about our society. Through her body image and dress, Ani must display a certain kind of wealth and class affiliation in order to gain leverage in the society that she yearns to belong to.

You have written that much of your writing was drawn from your own experiences leading up to your engagement and wedding. You were disappointed in yourself for not wanting marriage for the right reasons. In your case, being engaged brought a certain status, while for Ani, your protagonist, it was marrying Luke Harrison, a blueblooded New Englander.  It was Ani’s way of, as she states, “acquiring protection in success.” No one could hurt her if she had all of the right things.

Let’s face it; we have all been there. Wanting things for the wrong reasons. I love the way that you tackle the issue of class-usually no one wants to do this. I devoured all of those keen class observations like you would the last crumbs of a homemade chocolate chip cookie. Do you think there is something distinctive about class struggles today as opposed to, say, when American Tragedy or Great Gatsby was written? Or do you think it is essentially the same struggle?

I think the idea of keeping up with the Joneses has shifted so that it is less about having the biggest house and the nicest cars, and more about eating the most beautiful salad for lunch and having the coolest Friday night and taking the hottest new workout class on the circuit and capturing it all in the perfect filter on Instagram. There is much pressure to perfect these small day-to-day details, and to prove that we are happy, and having fun, and loving our lives. That’s a trap almost anyone can fall into, regardless of the family they were born into, and I’m interested in the disconnect between that glossy portrayal and reality.

A switch flipped when I turned twenty-eight and I suddenly felt like I wasn’t good enough unless I had a ring on my finger. I had a great job, great life, and great friends, but it still wasn’t enough to make me feel good about myself. The messaging was coming at me from all sides was that the next marker in life was marriage, and if I didn’t hit that I was somehow a failure.

Spoiler Alert: You have written online that you wrote a story that you were dying to tell. Was any part of what happened to Ani based on real life?

There are definitely parallels between my life and Ani’s life—I attended a private school on the Main Line and moved to New York after graduating college, where I worked as an editor at Cosmopolitan and SELF. I also wanted to channel the expectations I’ve faced in my own life into Ani’s experience—the pressure to be thinner, prettier, to change hats seamlessly and be all these things to all these different people—because I had a hunch they were universal issues for a lot of women.

Spoiler Alert: I read a review that was critical of your novel for “glossing over” the issue of rape. If “glossing over” the issue means that you didn’t start the novel with a tirade against violence against women, maybe, but the whole narrative arc of Ani’s story is all about the conflict that her character has gone through—in many ways more realistic response to rape culture. Women keep quiet about these matters and suffer silently.  (5) Have you had any survivors respond to your treatment of this issue? And if so, how?

I have not. I also haven’t heard the criticism that the book glosses over rape, but I have read more than one victim-blaming review—well, what did she think would happen when she went to a party with all boys and drank too much? How stupid could she be? Do I wish those people were evolved enough to turn the question around and ask how stupid those boys had to have been to have sex with a girl who was passed out drunk? Don’t they know that’s a crime? But there are certain people in this world whose minds are made up about certain things—the way women should behave being one of them—and they are unreachable and unteachable. Sarah Silverman has this great line. She says that the best response to sexist old men is, “Aw, look at the cute sexist old man being sexist.” The idea is that ignorant, close-minded people are so clueless that they should be inconsequential to us.

The topic of identity is at the core of Luckiest Girl Alive and I love that there is a message about reinvention. Do you think people often reinvent themselves in real life? Do we live in a society where that is easy to do?

I love the idea of rehabbing your image, and our society has made an art of it. Think of all the celebrities who have made comebacks after sex and drug scandals, the thousands of dollars they pay top-notch PR teams to jumpstart their careers again. It’s a very American endeavor, when you stop and think about it. The idea that anyone, anywhere, can make something of herself if she works hard enough.

When you were making your way up the ranks of the writing world in women’s magazines, did your peers ever talk about the pressures they felt to act and look a certain way?

It was more subtle than that. But thin, stylish editors were given preferential treatment—they were the ones the brand wanted to represent them at social functions and press events. When I lost weight for my wedding, I know I was treated differently. I was in features, so I didn’t have crossover with the fashion team, and we never really spoke. Suddenly, the fashion editors were saying hello to me in the elevators and complimenting my shoes or my bag. It was like the more I shrunk the more visible I became.

Interviews, reviews and commentary love to harp on Ani’s character. When did flawed, yet complex female characters become unlikable? I love that Ani has defects and strengths; she is not perfect and is not supposed to be. Are there double standards in how male and female protagonists are viewed in today’s fiction? Are male protagonists allowed to be more flawed?

I think anti-heroes are much more celebrated than anti-heroines. We idolize unlikeable male characters like Don Draper, Walter White, and Tony Soprano. I wanted TifAni to achieve that same iconic status. She’s got a little bit of a gangster in her. She’s tough as nails but as she breaks down, you see she’s a real person, who has been through battle and the only way she knows how to live is by wearing her armor at all times. I love when people tell me that Ani is a “bad bitch” or that they want to be friends with her or that they simply “love that Ani FaNelli” with a knowing laugh. These are the things we say about male anti-heroes, and it’s time for the girls to get the same treatment!