Critics have described Janice Y.K Lee as “[a] female, funny Henry James in Asia,” and her new book The Expatriates as a “captivating,” “exquisite novel of everyday lives in extraordinary circumstances.”

A psychological page turner, The Expatriates follows three American women in Hong Kong as they struggle with motherhood, marriage, infertility and an unexpected tragedy.

Kelly Sarabyn: Even with the close-knit expatriate community, the three women in your book were, in different ways, profoundly lonely. At least on the surface, their loneliness didn’t seem to come from being expatriates. But do you think living in another culture, in another country, exacerbated their feelings of being lost and alone?

Janice Y.K. Lee: There’s a duality to being an expat. You are very much a full-fledged member of the expat community, which is about as welcoming as it gets as you’re all in the same boat, but at the same time, you feel isolated as you’ve left your home community and your family. Many expats come to find their new community often substitutes as family and the relationships they form are often life-long ones that they cherish for many years after they repatriate.

KS: The American expatriates are able to have full-time domestic help in Hong Kong, that they wouldn’t have been able to afford in America. The women seemed to accept this system, with perhaps a little guilt. In your experience, did Americans ever struggle with the moral or ethical ramifications of paying (relatively) low wages to full-time domestic workers?

JL: All the time! There was a lot of navel-gazing. At the end of the day, we can’t find validation in others’ judgments. Everyone ended up finding their own balance of what worked for them. Being a parent is already such a judgmental arena that I hope we all just find try to find peace in our own actions! 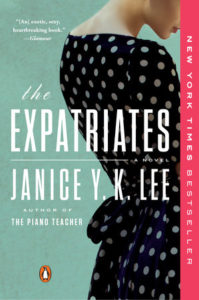 KS: I was struck by how insular and American the expatriates’ lives were in the book, almost more than they might have been in America. Are most American expatriates in Hong Kong there for financial and professional reasons, as opposed to because they have an interest in the culture? Is convenience and comfort the primary driver of the self-segregation? Are there resentments or tensions between the expatriates and the locals?

JL: I think there’s a lot of good intentions in the beginning. What an opportunity to live in another culture and experience different cultures. But when you are working a lot of hours and raising children, as a lot of these expats are in the middle of their lives and careers, at the end of the day, you just want to be comfortable. So, while you do try to get out and have different experiences, many times you just default to the comfortable and known. I can’t generalize about why most American expats are there, but I do think the majority are there for work, obviously, whether they chose to find work there because they wanted to be there or because the job took them there.

I think expats and locals co-exist pretty peacefully. Difficult people find themselves in difficult situations the world round!

KS: While on vacation with her family in Korea, Margaret darts into a Starbucks bathroom, leaving her three children with her sitter Mercy. She returns to the crowded street to find her youngest child, G, gone. Mercy has no idea where G went. The police are called, but G is not found. This occurs on page 53, but the incident is alluded to prior, as we observe the devastating aftereffects in Margaret and Mercy. Is there a reason you decided to start the book after the incident, and then return to it? Why did you choose to refer to G as G and never his (presumably) full name? As a reader, I felt like it shielded me from the full devastation of the loss.

JL: I felt like G should be a ghost, haunting every page of the novel, but never fully present. Not giving him a full name achieved that for me. I have a name for him but I feel like each reader will come up with their own.

KS: The Expatriates is a book very much emmeshed in the world of women. It’s told from the perspective of three different women, and though they all have relationships with men, the men are more orbital than central to the story. The Expatriates was lauded by critics, but some writers, like Jennifer Weiner, have claimed that literary critics tend to take books by and about women less seriously than books written by men, even if they are of the same quality. Do you have an opinion about literary critics and their perception, unconscious or not, of women writers?

JL: I think it is up to us women writers to continually, unceasingly hold up the other women writers we admire so we can all see their light (and, by the way, Lorrie Moore, Amy Bloom, and just in this past year, Helen Ellis, Julia Claiborne Johnson, Cristina Alger). Our work is incredibly relevant and important and meaningful. Books about domestic life are about life. We don’t have to read about battles or enormous whales to experience the complexity and grandeur of the world we live in. Everyone is in some sort of family. Everyone has or had a mother, a father. These are universals, and aren’t universals pretty important?

KS: The three women in the book were, for different reasons, lost and lonely. They often seemed to be making decisions passively, waiting to feel decisive enough to move forward in a particular direction. Do you think this was a function of the hardships they had endured, or part of their personalities? Is the expatriate community, because of its transience, composed of somewhat superficial bonds or did the women simply feel isolated by the depth of their personal tragedies?

JL: I feel like that was my mood when I was writing it so I take most of the blame! When I was living abroad I did feel, for some reason, less agency and engagement within my own life, whether it was due to my location or the time in my life, and I think it seeped into my words.

KS: Mercy was born to poor Korean immigrants in America, and she ends up attending Columbia University. There she flounders, not quite fitting in with her wealthy classmates. After college, without parental guidance, she ends up in Hong Kong because of a college friend. Mercy seems intent on staying in Hong Kong, even though she doesn’t flourish there, either, hopping from temporary job to temporary job before she experiences a tragedy. Why do you think she chose not to return to America? Do you think Mercy’s multiple identities—American, Korean, working class, Ivy League graduate, and Hong Kong resident—contributed to her inability to happily settle down? Like Mercy, you have a multicultural background—did your multiple cultural identities ever give you a sense of being unmoored?

JL: I think that when you’re young, you yearn to explore, both the world and yourself. By staying in Hong Kong, Mercy is doing something different from the life she had back home. She was more defined back home and, away, she can define herself on her own terms. I feel like that’s something many expatriates experience, the discovery that you can reinvent yourself in many ways. With Mercy’s multiple identities, I feel like she probably felt very at home in Hong Kong, where most of the people in her circle were similar to her, with many different ways to define themselves. I myself have trouble telling people where I’m “from” as that has so many layers and meanings, but as I’ve grown older, I’ve appreciated that I have many different perspectives which have helped me to see things from many different angles. 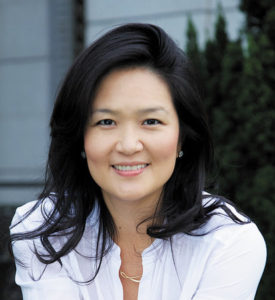 KS: Hilary and her husband struggle with infertility for years, but she doesn’t want to pursue medical intervention, like IVF. In your mind, did she have a specific reason for this, or did she simply feel like that wasn’t an appealing option? To what degree do you think Hilary having family money (and therefore not needing to rely on her husband or a job) affected her marriage and life decisions?

JL: I think for Hilary, it was mostly stasis! She couldn’t move ahead because so many things weren’t working the way they should: her marriage, her life, her environment. For her, her family background made independence more viable, and so she made decisions with that in mind.

KS: Margaret, at one point, is someone who seems to have it all: she is a beautiful woman with a successful career and a happy family. In Hong Kong, she decides to stay home with her three children. When her youngest child goes missing, she is immobilized by this loss, while her husband seems to be able to return to work and family life. Why do you think her husband was seemingly able to return to life more quickly? Did his grief just manifest itself in a different way? Did Margaret’s staying home make the loss all the more devastating?

JL: I’ve seen how men and women metabolize grief in different ways. This is a story as old as time! I do think that staying home is harder because there is nothing to take your mind off your loss. When you have to go back to work, there is something comforting about that. I think human nature makes most of us want to be productive and work and be part of something larger and when you take that away, depression often ensues!

KS: The Expatriates shifts seamlessly amongst Margaret, Hilary and Mercy. I never felt jarred switching from one perspective to the next, and I was equally interested in the travails of each woman. Did you find it difficult to decide how to intertwine their unfolding stories? How did you settle on three women in particular?

JL: I initially had one woman, and then I had two. I stayed with them for quite a while but one of them started acting erratically. I was up at Yaddo, the artist colony, where I was lucky enough to get a residency and really get down to work, and it occurred to me that she might be two different women. When I split her up, I knew that was the right decision and the world they inhabited started to come together. I had them in strict rotation in the beginning but my editor, Kathryn Court, convinced me that it was ok to not stick to that format and I started mixing them up a little more. I think it feels more natural now but it’s hard to tell when you’re in the midst of it!

Janice Y.K. Lee was born and raised in Hong Kong. Of Korean descent, she moved to the US when she was fifteen and graduated from Harvard College with a degree in English and American Literature and Language. A former editor at Elle, she moved to Hong Kong in 2005 with her husband, where they lived with their four children until recently moving back to New York City. You can buy The Expatriates here.