Emily Liebert’s novel Some Women is an emotional page-turner filled with complicated relationships—male and female, parents and children—and laugh out loud moments. It’s the perfect book to devour on spring break. We are delighted to speak with Emily today about her latest project.

Kelly Sarabyn: Some Women revolves around three different women who form a fast friendship in the middle of some life upheavals. Annabel’s husband has abruptly left her, Mackenzie is struggling with three years of infertility, and Piper’s daughter’s father reappears after ten years of no contact. What do you think drew these women together so quickly? Why do you think Annabel’s other friends were so unsupportive of her? Do you think the women’s intense bonds, initially forged by crisis, will remain as strong when their lives settle into a new normal?

Emily Liebert: I think it’s those life upheavals that initially draw them together. Each of these women is struggling with something different, but they’re all struggling and because of that they can offer one another comfort and support during their times of need. In the way of Annabel specifically, I don’t know that she really had any solid girlfriends prior to meeting Piper and Mackenzie. She had a lot of women in her life who were mothers of the other kids at school and also women who were either going through a divorce or had. It’s hard to be there for someone when you’ve endured the exact same thing as they have because you have so many preconceived notions of what should and should not happen. Or how someone should or should not feel. I do believe these women will stay close once their lives settle down. They’ve formed a special bond and, although they’re dissimilar in many ways, they really get each other. 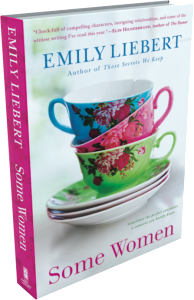 KS: In the beginning of the book, Annabel’s husband Henry suddenly leaves her, with not much more explanation than Annabel has become a “miserable” person. Since the book wasn’t told from Henry’s perspective, we can’t be sure whether he ever tried to talk to Annabel about his unhappiness with the relationship, or, as she sees it, he just took off one day. In your mind, did Henry fail to say anything until he was ready to walk out on the marriage, or did Annabel miss some of his complaints? Do you think Annabel was miserable in her life as a stay-at-home mother and didn’t see it? Do you think it is common for men to avoid big, emotional discussions like this?

EL: I love these questions! Yes of course I think men avoid big emotional discussions!! That said, while he may not have sat her down for a heart-to-heart, I do think—in his own way—that he’d conveyed to her many times that he was uncomfortable with her being such a control freak. I truly believe that men are from Mars and women are from Venus. We communicate very differently. So, while—in Henry’s mind—he’d probably shared his frustrations multiple times, for Annabel all she’d heard were little gripes. Thus, when he decides to up and leave, she’s shocked. I wouldn’t say that Annabel was miserable before Henry left, but I think she was dissatisfied in life and that she needed to relax.

KS: The fathers in the book were not portrayed as having the same conflicts when it comes to parenting vs. work that the mothers did. Annabel had a successful career before she decided to stay home with her twin sons, while her husband happily kept working at his demanding job. Piper’s daughter’s father took off when Piper was pregnant, leaving her to raise the child on her own. And Mackenzie’s husband is much less invested in their infertility struggles than she is. Even though men are more involved in childcare than ever before, do you think it is still largely women who struggle over how to balance raising children and work? Do you think most women are happy with their choices, or feel frustrated that they can rarely “have it all”?

EL: Yes, I absolutely think the struggle for women to “have it all” is far greater than it is for men. This is not to say that men can’t work hard and be amazing fathers. My husband is one of those men. But he—and so many other men I know—don’t put the same pressure on themselves as I do or as my girlfriends do. And that may never change. I think it’s less about who works harder, who makes more money, and who spends more time on family and kids and more about how men and women differ fundamentally. As women, we should probably learn something from men and try not to put as much pressure on ourselves to be everything to everyone all the time.

EL: They were very forgiving—I’m glad you noticed that, because it was important to me to show that. People go up and down. Some days things feel okay. And other days, anger can resurface. I think that’s normal. The thing is, at some point, in order to be happy, you need to learn to release the negativity. It’s something I work hard at in my own life—I tend to be a grudge holder! But, really, who does that help? Not me. I believe that their forgiveness will last. They may not forget and they may take two steps forward and one step back, but that’s life.

KS: While I was reading, the book often felt cinematic. Do you ever visualize the story that way while writing? If it did become a movie, who would you cast as the leads? 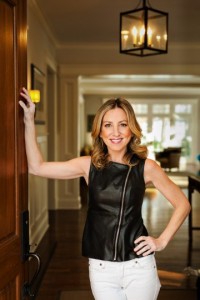 EL: I always envision my books becoming movies!! (Hello? Hollywood? It’s me, Emily.) That said, I try not to cast the leads until I’m done writing. I like to have my own vision of what the characters look like before I apply a celebrity. But, since you’re asking! I could see Jennifer Garner playing Annabel. Mary-Louise Parker in the role of Piper. And Blake Lively as Mackenzie.

KS: How important do you think females having strong friendships is to overall happiness, and hence their romantic relationships? In the book, it seemed like strong female friendships enabled the women to feel more grounded in themselves and thus have more successful romantic relationships. Do you think with work, marriage, parenting and geographical mobility, it is easy to fall into a place where you don’t have those friendships? In the beginning of the novel, it seemed like neither Piper, Annabel, nor Mackenzie had those types of friendships in place, for different reasons.

EL: Strong female friendships are so important. For me, I’d be lost without my core group of girls who are supportive, understanding, and are really the only people who can relate to exactly what I’m going through at any given time. However, I think so often what happens—as you say—is that we become consumed with work, family, etc…and friendships are the first things to suffer. My best friend lives in Chicago and I live in Connecticut. She’s more involved in my life than some of my friends who live locally. We make our relationship a priority. And, yes, I do feel that when you have that support system in place it makes everything easier, including maintaining a successful romantic relationship.

KS: You are a prolific writer. Do you ever get writer’s block? Where do you derive inspiration from when you’re starting a new novel? Are any of the novels you’ve written your favorite—or are they like children, all loved equally?

EL: I rarely get writer’s block for any extended period. There are certainly days that I’m feeling it more than others. On the days that I’m not feeling it, I really push myself to write those first few sentences, which sometimes take half an hour. Once those are down, the words usually flow. If there’s a day where I can tell it’s just not going to happen, then I give myself a break and go get a manicure! I derive inspiration from the world that I live in, my own experiences, and the experiences of those close to me. I like to write about what I know. My favorite novel is the new one SOME WOMEN! I hope my readers agree!