Book Club Babble had the recent opportunity to talk with Ellen Wittlinger, winner of the Lambda Award and the Printz Honor. She discussed her latest novel, Local Girl Swept Away, a story that explores the complicated dynamic of teenage friendships in a small coastal town in Massachusetts.

Kate Newton: Ellen, we appreciate you taking the time to speak with us at Book Club Babble. As someone who’s written fifteen YA and middle-grade novels, you’re one of the most prolific authors we’ve had the pleasure to interview. What led you to become a writer and how did you get your start?

Ellen Wittlinger: As far back as high school, writing was clearly my strength, but I so much wanted to be a visual artist that I majored in that in college. By my senior year, though, it was clear that my writing was a lot better than my painting. A professor suggested I might want to apply to the Iowa Writer’s Workshop, which I did. I got in and I never looked back. I wrote poetry first, then adult fiction, then plays (which I still do,) and finally realized I might actually earn something close to a living from writing YA novels.

KN: Can you share how you got the initial idea for Local Girl Swept Away, and did that idea change over time? 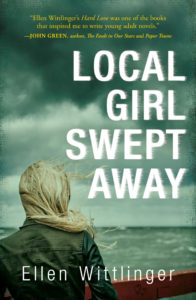 EW: Many years ago I lived in Provincetown, MA on Cape Cod, where the book is set. I loved the place and have set several novels there. In 1975, when I was living there, 2 young women were swept off the breakwater at the far end of town. One was saved; the other drowned. The event stayed in my imagination all these years and all of a sudden I knew how I might use it in a book. This book is not about those 2 girls—my story is completely different (and was from the beginning,) but I don’t think I’d have come up with it without that inciting incident so long ago.

KN: Please tell us a little about your writing process. Do you tend to plot out your books methodically in advance, or do your stories evolve more organically?

EW: I’m not a plotter, although I often think I ought to be as it seems like it might make the process move more swiftly without so much backtracking. But I don’t seem to be able to work that way. I rewrite the first few chapters of a book over and over until I get the voices right. Once I know who my characters really are, I can usually write straight through a first draft, usually chronologically. I write relatively quickly, although I also do some editing as I go along so the “first draft” is more like a second or third.

KN: One of the most salient aspects of Local Girl Swept Away is your ability to depict the location of Provincetown in Cape Cod with such vivid and memorable images. You can almost feel the cold wind of that first day as the book opens. I understand you lived there many years ago, yet it sounds like you’re still a local! How do you retain that environment in your mind enough to write about it so convincingly?

EW: I haven’t lived there for a long time, but I make sure to go back at least once a year and often more. I maintain friendships with people there, and it still feels like my spiritual home. I’m never happier or more at ease than when my car comes over the rise in the road and I see Provincetown spread out before me. I’m also an avid (though amateur) photographer and P’town is one of my favorite places to photograph, so I can always refer back to pictures to remind me of the place. (The photographs used in the book trailer are my own.)

KN: What challenges if any, did you encounter when writing the book?

EW: I think the challenge was figuring out what role Lorna played in all their lives, and how her influence would play out. Who is she and why does she do what she does?

KN: Speaking of Lorna, part of the allure of the story is the almost mythical quality of her character—a hero to her friends, and a person Jackie, the narrator, almost worships. On the other hand, another character, Charlotte, has a completely different perspective on Lorna. Without giving too much away, we learn that there is more to Lorna than meets the eye. These realizations about friendships can be one of the most painful parts of growing up. This seems to be one of the main themes of the book.

KN: I couldn’t help notice that the teenage characters tend to call their parents by their first names. Was that a conscious choice on your part, to depict a certain cultural tendency in that particular community?

EW: I’d have to go back and check, but I think they mostly do that in talking to each other or in thinking about their parents. It’s a way of distancing themselves from their parents and tightening the bonds between the friends. Jackie, I think, wouldn’t dare call her parents by their first names to their face. On the other hand, Finn probably does from time to time because his parents are very arty and liberal and would likely just roll their eyes at such behavior.

KN: One memorable line that impacted me was either spoken or implied by Jackie’s mother: “An ebbing tide lures the careless to a watery grave.” I felt there was a lot of symbolism in that phrase beyond the simple warning to be careful walking on the breakwater. Would you care to elaborate?

EW: Jackie’s mother is very superstitious which is not unusual in a community like Provincetown where so many people lose friends and relatives in boating/drowning disasters. Jackie thinks she’s too sophisticated to believe in such tales, but she can’t help but be affected by her mother’s beliefs. I liked this line because it sums up the idea that you can’t trust nature, can’t trust the water which surrounds you on all sides. Jackie hears this at a time when she’s questioning just what she can trust.

KN: I expect readers to be curious to see what becomes of these young people and their hopes and dreams. The book seems to just call out for a sequel! Do you have any plans to continue the story? 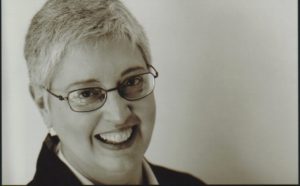 EW: Not at this point, no. I almost always feel the story is finished when I end a book. Of course, I’ve been convinced to go back to characters before, so I never say never.

EW: When I was young I read lots of plays; my first literary hero was Tennessee Williams and I still go back to read his resonant dialogue. J.D. Salinger’s prose always thrilled me, although less Catcher in the Rye and more Nine Stories, which I used to reread every year. Grace Paley is another author I adore. The early Jane Smiley as well. There are so many! Among YA authors favorites are Virginia Euwer Wolff, Brock Cole, M.T. Anderson, and recently Jandy Nelson, Laura Ruby, and Tim Federle.

KN: Thanks so much for chatting with us, and congratulations on the publication of Local Girl Swept Away.