Bobby Earl’s new client is the beautiful but vulnerable Kate Carlson, a prominent LA lawyer charged with a murder during a prison break. Bobby thinks he knows what’s at stake—negotiate a decent plea deal for a guilty client, pocket his fee, and move on. But Kate insists she’s been set up. To find the truth, Bobby must risk his own life, career, and everything he loves. In a desperate battle against a powerful and expanding conspiracy, he dredges up the secrets of the billion-dollar private prison industry and the powerful California prison guards union.

Book Club Babble is delighted to chat with author Ed Rucker about his latest legal thriller. 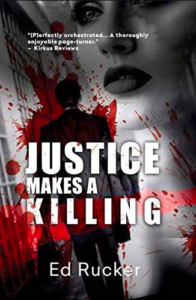 Kate Newton: Thanks for taking the time to talk with us about Justice Makes a Killing. I’m an attorney myself, and I’m fascinated by other lawyers who become writers. Tell us about your legal background, and how your writing career developed.

Ed Rucker: I was a criminal defense lawyer my entire career, trying over 200 jury trials including 13 death penalty trials. It was a fascinating career that lent itself to many newsworthy cases. Among my high-profile trials, I represented John Orr, a Glendale Fire Department arson investigator who was reputed to be the greatest serial arsonist in American history, a trial memorialized in Fire Lover, by Joseph Wambaugh; Laurianne Sconce, the matriarch of the family-owned Lamb Funeral Home, whose trial for organ harvesting was the subject of the book Ashes, by James Joseph; Eddie Nash, a prominent nightclub owner, who was charged in a death penalty case, and who was portrayed in the film, Boogie Nights; and William Harris, a member of the Symbionese Liberation Army, who kidnapped Patty Hearst.

My writing career was more interrupted than developed. I always wanted to write. Years ago, before the emergence of Grisham or Patterson, I wrote a legal thriller while working at the Los Angeles Public Defender’s Office. Holt, Rhinehart was interested, but wanted me to change the ending. At that same time, I opened my own law office and had a family to support. I assumed I would find the time to return to my writing, but the demands of my practice consumed me. When I did return with my book The Inevitable Witness many years later, the field was immensely crowded.

KN: Are there similarities between writing a story and presenting a defense at trial?

ER: Trying a criminal case has much in common with the creation of a mystery plot, because in a jury trial both the prosecutor and the defense lawyer are really just telling conflicting stories. They both start with an array of “facts” uncovered by the police, such as witness statements, documents, or forensic evidence. The prosecutor then weaves these facts together into a story, one that shows that the only way to explain them is if the defendant committed the crime.

The defense must tell an alternate story about these same “facts,” one that accepts the science-based forensics, while demonstrating the unreliability or falseness of other facts, which then leads to a different conclusion or even points the finger at someone else. So presenting a defense is very much like crafting a good story.

KN: Bobby Earl talks of being a trial lawyer as an addiction. Is that your experience? Please describe that for us.

ER: For a defense lawyer, the trial of a criminal case is an intensely stressful event. You have the responsibility for the entire future of another person in your hands. This responsibility tends to hone your concentration into a needle-like focus. For example, you often face witnesses with whom you must summon all your skills to elicit certain testimony which they are determined not to concede. In such contests you must focus on every word, every glance, every gesture, while always being keenly aware of the testimonies impact on the jury. And you have only one chance at it. There are no do-overs in criminal law. Such laser-like concentration is physically draining, but in that moment in time you feel intensely alive, as if nothing outside the courtroom exists. It’s as if all your senses were amplified and totally engaged. It is a feeling that is difficult to duplicate anywhere else. So, yes, in that sense, it’s addictive.

KN: At one point Bobby says he prefers guilty clients. Would you say that is a common feeling among the defense bar, and if so, why?

ER: The conviction of an innocent client is any defense lawyer’s worst nightmare. When a lawyer chooses to take a case, they assume a lot of responsibility because a client has placed their trust in them to ensure that the justice system operates as it should. We have an adversarial system, so the defense lawyer alone is responsible for advancing the client’s case. If a lawyer is convinced of the client’s innocence, even if he or she has put forth their very best effort, a conviction cannot help but make them feel that they have somehow failed that client. That they didn’t accomplish their job. To avoid that haunting failure is why defense lawyers often prefer guilty clients.

KN: What are some of the challenges or benefits in working with a client who is also an attorney? Is Kate Carlson a difficult client to represent?

ER: I have represented several attorneys in my career. The one thing they all have in common is that they are deeply frightened. A conviction may not only cost them their freedom, but also their profession, their social standing, sometimes their family, and even the very sense of their place in the world. Such fears tend to strip away any protective layers and reveal their basic character.

Not only do lawyers differ in their characters, but not all lawyers are trial lawyers or have any familiarity with criminal law. Those without such experience are usually willing to let their lawyer guide them. Civil litigators are often afraid to put their fate into the hands of someone else and will try to use their lawyer as a tool to carry out their own strategies, which is always a mistake. Others will listen to advice, have the ability and experience to understand the reasons behind it and will follow it.

On the plus side, almost all lawyers bring with them the knowledge that there are aspects of the judicial system that depend completely on chance, which can have an impact on the case and over which their lawyer has no control. These factors of chance include which judge you draw and how they make their rulings, the composition of the jury, and even the ethical standards of the prosecutor.

KN: Let’s talk about Lauren Taylor. She thinks to herself, “If some rules had to be ignored, so be it.” What motivates her? Is she the worst element in the criminal justice system?

ER: Our jury system is often seen as the envy of the world. But like anything dependent on human beings, it has its failings. Taylor is an example of some of those. Prosecutors have a difficult task in our system because they are asked to not just to win, but to seek justice, which often requires them to do things that run against competitive instincts. To prevent the conviction of innocent people, prosecutors are under a constitutional duty to reveal to the defense any evidence they discover that may exonerate the defendant. Some prosecutors, like Taylor, convinced of the defendant’s guilt, see no need to provide the defense with such evidence which will only raise obstacles to the “proper verdict.” The need to win, whether to advance their career or to punish those they decide are guilty, prevails and the evidence is buried. This failure is amplified because if this evidence ever surfaces it rarely results in any consequences for these prosecutors. Judges are reluctant to punish or even name these prosecutors, which creates a culture of immunity among prosecutors and the police. News reports are not uncommon today of innocent inmates released after years in prison based on newly revealed evidence that a prosecutor should have shared at their original trial.

KN: Certainly you’ve been asked this dozens of times, but are any of the characters based on real people? Or perhaps a composite of individuals?

ER: The characters in my books are composites of people I have dealt with in my career. I have tried, as best I could, to make each one as realistic as possible. Not so exaggerated as to be fanciful, but in each there are aspects of people that could be found in any Los Angeles courthouse or police station. There is drama inherent in a high-profile murder trial and characters drawn to the dark world of criminal prosecutions. These characters, if drawn well, can be compelling and it was my goal to take on the challenge.

KN: The inherent conflict of interest in for-profit prisons is getting a lot of attention lately. What do you see as the prospects for the future of the industry?

ER: I think the current attention placed on the private prison industry has exposed their abuses to the public and a political will is building in some parts of the country to put an end to the use of for-profit prisons altogether. President Obama had issued an order, near the end of his second term, that the federal government would stop using them. The present administration reversed that. California has just passed legislation that prohibits the State from contracting with for-profit prisons starting in 2023. I think this is a movement that will spread to other States.

KN: Do you have any advice for writers of legal thrillers?

ER: The standard recommendation still has merit: read intelligently and continue to write each day. I would also encourage writers to read Ann Patchett’s collection of essays in This Is the Story of a Happy Marriage, to see how hard she worked to become a successful writer.

KN: Lastly, what’s next? Are there any new cases coming in for Bobby Earl?

ER: Right now, I’m working on a historical thriller where the crime takes place in Los Angeles in 1975 and a Young Bobby Earl is presented with newly discovered evidence in the case of a convicted murderer who has been in prison for 35 years.

KN: We’ll be sure to keep an eye out for that one! Thanks so much for participating in this interview with Book Club Babble.