Romantic bohemians Claudio and Mathilde Simone run a struggling vinyl store in New York while trying to raise their three very different daughters, Natasha, Lucy, and Carly. An arresting saga about an eccentric, tightknit family, Sunday’s on the Phone to Monday is Christine Reilly’s debut novel. With lyrical prose and distinctly memorable characters, the book examines the ties that bind families together in the midst of trauma and tragedy. 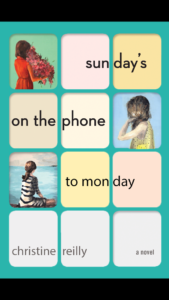 Kate Newton: Christine, thanks for meeting with Book Club Babble and congratulations on the publication of your debut novel! You’ve written a compelling family drama with unique and memorable characters. You’ve said that the book started as a series of poems you wrote when you were nineteen. Can you explain how that book of poetry evolved into a novel?

Christine Reilly: I’ve always written about fictional characters, but in the form of narrative poetry. Words, characters, assonance, and rhythm were my passions—I didn’t think I had either the stamina or the storytelling ability to write a full novel. After college, I pursued an MFA in Poetry at Sarah Lawrence. I took a fiction class as an elective, where I placed the characters in my poetry into scenes. For my thesis, I worked on a collection of poetry for two years, but in that time, I found myself reading much more prose than poetry. Likewise for my scenes—this is where my characters found their new home.

KN: The book is written from multiple points of view—Claudio; Mathilde; the three daughters Natasha, Lucy, and Carly; as well as Jane, Claudio’s sister. I’m hoping you can you talk a little bit about the craft of writing. Was it challenging to be in so many people’s heads, so to speak? Did you use a particular writing technique to maintain consistency? 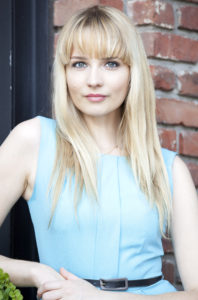 CR: Close third-person narration with multiple characters has a tough reputation, but this point of view felt natural and didn’t provide any more of a challenge for me. I find first person to be limiting in other ways—you have to strongly consider your word bank through the lens of your characters, and there’s the issue of reliability.

KN: Every author is asked this question so I’m sure you’re ready for it—are there any autobiographical elements in the story? Are the characters based on people you know?

KN: Relationships among sisters are often very complicated. How would you explain the bonds between the three girls? And how did Lucy’s illness affect their relationships?

CR: The driving force of my novel was to write about a character (Claudio) who would do anything in his power to save his sister (Jane), even if it exceeded realistic boundaries (I do not intend for my characters to be fully realistic; the goal was more archetypal) or even if the execution tragically differed from his intentions. For the second half of the book, I set out to write about three sisters who cope with a tragedy in wildly different ways. So much is factored into the how—there’s birth order, there’s origins, there’s personality. Lucy is wise beyond her years but fatalistic. Natasha is responsible, but this comes with the habit of playing martyr. Carly rebels and finds love elsewhere, but also tends to deny her circumstances.

KN: The book begins with Claudio and Mathilde and their courtship, but as the story progresses, the sisters take on a larger role, and Claudio and Mathilde begin to recede into the background. But their relationship evolves as well. How would you characterize the way they change over time, both separately and as a couple?

CR: There’s the saying “write what you know,” but there’s also “write what you want to know about,” and with fiction I almost always tend to steer towards the latter.  I’m very curious about what I haven’t lived through.  I am lucky to have parents who’ve had a long and wonderful marriage, as well as both sets of grandparents, so I’ve witnessed it, but I’m inexperienced with the private and firsthand side of such a relationship.  So part of the fun with writing Claudio and Mathilde’s relationship over the years was examining what that relationship would be like.

KN: Some of the most poignant sections of the book revolve around Jane, Claudio’s mentally ill sister. You did a great job of making her a multidimensional and intriguing character. What do you consider her main significance to the story?

CR: Thank you! The two themes of this novel are resilience and compassion.   When I say theme, I’m talking about the emotions I’d like to solicit from the reader and what I’d like the reader to be thinking about when the novel is over. While both themes are present in both Lucy’s and Jane’s stories, resilience is at the forefront of Lucy’s story, and compassion rules Jane’s. Formerly, I worked in a mental hospital. I wanted to capture all of the emotions present in that hospital and place them in the book. While great medical strides are being made presently, I still think our culture has a long way to go with how we understand and treat mental illness.

KN: I don’t think I’ve ever read a fictional book that includes an index. Can you comment on that?

CR: I read a lot of nonfiction, where citation rules. If you don’t cite, how can you expect the reader to trust your words? And I thought, how about a fiction rule where the emotional themes are cited? The concept was whimsical, but as I started to think of index topics and find them on each page I understood the book, and its veins, in a new way.

KN: Music is a huge part of this novel, including the title. Can you describe the title’s significance? What did Carly mean when she realized that the lyrics of that song had something to do with time?

CR: The title can be deciphered on multiple levels—on the most literal level, it’s a Beatles song reference. When I was a teenager, “She Came in Through The Bathroom Window,” was one of my favorite songs, and that line haunted me. Writing the first few drafts of this book, I wrote the novel in cyclical order—a story within a story—like a Russian doll. While I think the story took a stronger shape linearly, time remains a present issue. Despite the novel’s span of multiple decades and generations, there is not enough time for my characters. This is their tragedy, and also what makes their lives meaningful.

KN: Lastly, what next? Are you working on another book?

CR: Yes, but it is entirely different—I retired the Simone family. My new book also takes place in New York and is also about illness—one that people in our society don’t really know how to cope with or understand. That’s all I’m saying for now.

KN: Thanks for speaking with us at Book Club Babble. We look forward to your next book!