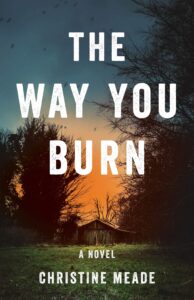 This week I interviewed Christine Meade about her new novel, The Way You Burn. She kindly agreed to answer a few questions about the book.

Tell us about your inspiration for writing this story.

I remember at 22 feeling so confident about who I was, what I stood for, and what kind of person I wasn’t. But all of that was challenged throughout my twenties thanks to cross country moves and job changes and grad school and challenging relationships. I wanted to show that unique struggle through David’s experience of loving and learning to leave Hope as well as moving to New Hampshire to live alone for a year. That decade in any individual’s life is really about figuring yourself out as an adult, which makes for great novel fodder.

The story is written as a letter from the main character, David, to his enigmatic ex named, Hope. I’ve never read a book written entirely in second person POV. Can you share more about how and why you decided to use this novel way to tell a story?

I wanted the novel to serve as David’s reflection on the past year or so of his life and most importantly, his attempt to share with Hope his eventual understanding of where she was coming from and why she made the choices she did. I think many men do not realize the challenges faced by women throughout history, so I wanted the novel in second person to be David communicating with Hope as an explanation of his evolution and awakening to this reality.

David befriends an older man named Harold. In fact, he becomes Harold’s caretaker. It doesn’t seem very common for men in their 20s to volunteer to care for seniors, especially ones who aren’t relatives. How did you come up with the character of Harold? Why was he important for this story?

Harold may be my favorite character in the book. I often find myself writing about intergenerational relationships because I believe we have so much to learn from one another, although such relationships are often underappreciated in western society. The Way You Burn is a coming-of-age novel and because of this, the story needed a character like Harold to serve as David’s point person for wisdom. He learns about long-lasting love through Harold’s stories of his wife. He learns how to really care for another being instead of being the one taken care of by his parents. He learns about shame, responsibility, and loss through his relationship with Harold, all of which are pivotal for him to evolve as a character.

David’s relationship with Hope is tested because of her severe mental challenges and trauma. Where did the character of Hope come from?

Hope came from a compilation of personality traits and stories from people I’ve been in relationships with in the past. Although not based off of any one person that I know or have met, I wanted Hope to appear to David at first as the stereotypical “manic pixie dream girl” type, only for him to then realize she is far more complicated than any “type,” as we all are in the context of our past experiences and traumas. David’s life has been fairly uncomplicated up to the point when the story begins, but not everyone is lucky enough to have been dealt those same cards, as he learns. And this certainly includes Hope.

I started writing The Way You Burn nearly a decade ago when I was in my twenties. I only came back to it a few years ago to make a serious attempt at its revision. As I neared the end of my revision process, I attended a writing conference where a panel of publishing professionals discussed the future of publishing. She Writes Press was mentioned in particular as an all women-run publishing company that publishes only female authors. I really liked their mission and submitted The Way You Burn, which was accepted and then published by them less than two years after my initial submission! 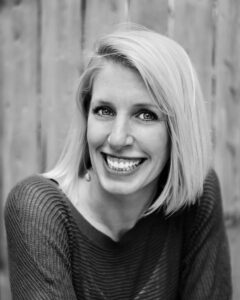 Christine Meade is a writer, editor, and educator. She holds an MFA in Creative Writing from the California College of the Arts. A native New Englander, Christine currently lives and writes outside of Boston, MA. “The Way You Burn” is her first book, to be published by She Writes Press in April 2020. To learn more about Christine Meade’s life and work, visit her website, //www.christine-meade.com.