The following description and interview were submitted by Cai’s publisher, Red Hen Press. 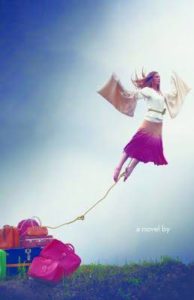 Bronwyn Artair is an atmospheric scientist feeling out of place in her graduate program, her relationships, and her life. Fleeing MIT for rural New Hampshire, where she works as a meteorologist at a local TV station, Bronwyn suddenly develops an unusual power.

One day during a hike by the ocean, she becomes connected with the weather itself…. she’s able to stop tornados and fires, hear ants walking across a log, and to influence the very thing she reports on. Unsure to whom to reveal her secret, and how to best use her newfound power, Bronwyn embarks on a journey of self-discovery that takes her around the world and all the way to Siberia where climatologists are studying methane emissions at the Arctic Cloud Project. As she seeks answers to these questions, she travels to Kansas to see the tornado maverick she thought was her mentor; falls in love with Matt, the tabloid journalist who has come to investigate her; feels called to visit the fires raging out of control in Los Angeles; and eventually voyages with Matt and Dr. Fenwick to the methane fields of Siberia near the Arctic Sea.

WEATHER WOMAN balances emotion with humor and a unique blend of accurate science and modern magic. Bronwyn’s story poses questions about women and power, logic and intuition, and what our damaged planet needs from all of us right now. 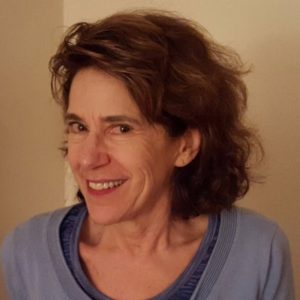 What prompted you to write about a character who controls the weather?

I grew up in New England where weather can change on a dime. I sometimes felt bad weather was my fault, and I wished I could change it. I would look up at the clouds and imagine maybe I was changing it. Eventually this longing gave rise to a character who really can change the weather.

You have a way of writing about the weather that makes the reader feel almost as moved by it as Bronwyn is. How much research did you do into meteorology and climate change in order to write this book?

As soon as I thought of the idea for this book it was apparent that a great deal of research would be necessary. While I have always been very interested in science, I have very little science background (early on I gravitated toward the arts). So, I tried to play catchup. I began with a 24-lecture DVD series from Great Courses, called “Meteorology: An Introduction to the Wonders of the Weather” taught by Robert Fovell of UCLA. This was a terrific introduction to the field of meteorology. Other standouts in my research were books by Elizabeth Kolbert, Bill McKibben, Craig Childs, Fred Pearce, among others. I read bits and pieces in physics texts that were way beyond me. I came across a gem of a book called The Cloud Collector’s Handbook by Gavin Pretor-Pinney, which contains pictures and descriptions of every kind of cloud. I talked to numerous science people including our local TV meteorologist, Candace Campos, now at News 6 in Orlando. And while browsing climate scientists on Twitter I began a dialogue with climate scientist Jason Box (he was featured on the cover of Rolling Stone as “The Ice Maverick”), which led to my traveling to Greenland in his company, a great privilege.

The book integrates elements of the supernatural or magical with elements of science. What was your approach to integrating these two things?

This was the part of the book that took the most work. In early drafts I tried to explain Bronwyn’s power scientifically, but it became clear to me that not only was I stretching scientific credibility and inviting skepticism, but it was also unnecessary. What was finally important was creating the conditions under which the reader could happily take a leap of faith.

There is an overall sense of positivity and generosity towards the world in the book. It’s striking because writing about things like climate change, or people just living their lives, in literary fiction often falls prey to a kind of reflexive negativity/cynicism. Did you set out to convey that tone?

Bronwyn feels deeply connected to the earth and appreciates the multitude of its expressions, even the destructive ones. I hope the reader will also marvel at the might and the beauty of the earth’s forces, and realize that those forces are far more powerful than humans are. In all honesty, while I hold a rather bleak view regarding the probability of human survival, I am an upbeat person in day-to-day life and I think the book’s tone emanates from that.

When Bronwyn finally accepts her abilities, she must take responsibility for what she does—and doesn’t do—to help the world. In many ways it’s a story about women and power, especially new-found power, and about what humans must do to heal the earth. Can you talk about that?

Yes, I definitely feel the over-arching theme of the book has to do with a woman wrestling with her power and trying to find the best expression for it. First, can she really accept herself that she has this power? Then: Who can she tell? Will she be believed? What will others think? Finally, what will she do with this power? For a shy, self-doubting woman who has been mocked in a graduate program these are difficult questions to answer, but she muddles through, as we all do. The primary question Bronwyn faces is the same question we all face going forward: We do have power but how do we use it? A corollary of that is: How do we best heal the earth? Is it the purview of one individual?

Have you ever traveled to Siberia? If not, how did you write about such a distant place?
I have not been to Siberia, and for a long time I thought it would be impossible to write about such a distant, foreign place. But I knew the book had to end on the methane fields there, so I had no choice but to figure out how to write about it. Though there are many negative things to be said about being a writer in the digital age, the internet has made certain kinds of research possible that would have been impossible even a couple of decades ago. I started Googling various places in Siberia, found out that there is a weather station in Tiksi, Russia, and decided Tiksi was the right place for the book to end. Then I happened on a wonderful blog written by a young woman about her life in Tiksi. What a find! The pictures and the writing on the blog were so evocative they transported me there, and after that I felt confident to write about this place I’d never visited. Of course, I may have gotten a lot wrong, but what I sought to create was not verisimilitude, but an atmosphere, how it might feel to live in—or visit—a remote location near the Arctic circle.

I loved how the characters were all mature and responsible adults, and yet were still allowed to embrace change and discovery and wonder. It wasn’t a story about people being stuck, but rather being unconventional by choice. Discuss.

Bronwyn and Matt are both people who are reconsidering their choices and trying to find lives that are more in concert with who they see themselves to be. For this reason, they are open to change and discovery. Eventually, due to their influence, Diane, too, begins to rethink her choices. We have a tendency to think of life as moving forward along a straight linear path, plateauing sometime in mid-life, but in actual fact our lives often take radical turns, veering in new directions, possibly because we’re responding to something that has unexpectedly presented itself, or because we’re looking for something more satisfying or more authentic. Sometimes, when people appear to be stuck, they are not actually in stasis, but at one of these pivotal moments of change where a great deal is happening, at least internally.

Can you describe your writing process?

I am one of the few remaining long-hand writers. I write upon waking. We have a coffee maker in the bedroom and my partner brings me coffee and then leaves, and I begin work, propped up in bed, writing on a lined pad of paper, or in the blank book where I jot notes, ask myself questions, and lay out possible ideas for upcoming scenes (or stories or novels). These days I try to work out as much as I can about a novel before the actual writing begins. In the past, when I dove in too soon, I often wrote hundreds of pages I had to throw out. I write for 3-4 hours, or until duty calls. If I have time in the afternoons I type my handwritten material into the computer, making changes as I go, but the main work of revision is always done on a hard copy.