Paul Strom has the perfect life: a glittering career as an advertising executive, a beautiful wife, two healthy boys, and a big house in a wealthy suburb. And he’s the perfect husband: breadwinner, protector, provider. That’s why he’s planned a romantic weekend for his wife, Mia, at their lake house, just the two of them. It will be the Best Day Ever. Or will it? Join us for our interview with this riveting book’s author, Kaira Rouda. 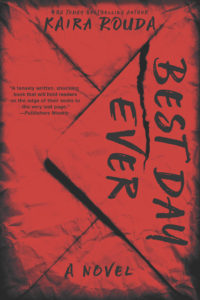 Kate Newton: Paul Strom is a fascinating character! Buck characterizes Paul as a malignant narcissist, yet he’s insecure about certain things, such as his weight, and he shares his bad habits with the audience, like popping his knuckles, which he considers a “low-class habit.” These insecurities and flaws make Paul more accessible as a character, would you agree? Was this part of your strategy for keeping readers interested in such an un-redeeming protagonist?

Kaira Rouda: What an interesting observation. I’m glad you felt Paul was at least a bit accessible! Thank you for saying he is. It was my goal to make him a fully-formed albeit ultimately horrible character. All along I enjoyed his droll sense of humor and that he has small imperfections that he’ll reluctantly acknowledge is part of that humor, to me.

KN: One characteristic of the book which I’ve seen rarely in other works is that Paul talks to, and in fact, interacts with readers, for example, when describing the lake house: “Sounds romantic, doesn’t it?” In some cases, he even anticipates the reader’s response, saying things like, “No, that isn’t it, what you’re thinking.” It’s as if it’s part of his pathology, and he’s communicating with an imaginary being. How would you characterize this relationship to readers? Is he trying to impress readers, educate them, or is he seeking their approval?

KR: Paul wants you to like him, very much. He is trying to show off for the reader during the entire book. He’s like a little kid in that way—look at me, look at me. When he talks to the reader it’s also his way of staying in control, or trying to. He wants to be sure you see things the way he sees things. It bothers him if he loses control—even when he feels he’s losing control of you.

KN: Paul seems to get progressively more deranged and dogmatic over the course of the nearly 24-hour-period the book covers. Is he actually decompensating, or is he just filtering less for the reader?

KR: He’s decompensating. He is in a panic, and his carefully orchestrated life is slipping through his fingers…

KN: Mia stayed married to Paul for many years. Is she a naïve character? Should she have been more aware of Paul’s true nature sooner? Or did she have her own motivations that caused her to overlook or selectively ignore troubling traits of Paul that might have tipped her off?

KR: Mia was pulled into the web of a malignant narcissist and quickly had children with him. It’s a particularly tricky and awful predicament. That she found the strength to leave is the important and powerful part of the story to me, rather than focusing on a time frame.

KN: Paul gives an insight into his psyche when he says, “Rage lurks deep inside me.” To what degree did his upbringing shape his character?

KR: There are differing theories on how people like Paul come to be, whether it’s nature, nurture or a combination of both. His childhood was trying. His father was controlling and his mother weak, not protective. But many people have a tough upbringing and don’t turn out like Paul.

KN: The one part of Paul’s life that is seemingly above reproach is his relationship with his two sons, who he refers to as “our precious boys,” Yet he also says, “They are my gift to the world.” Are they just a commodity? Is it likely he would later find fault with them as they grew up? He seems to indicate possible trouble ahead, for example, regarding future rules, he says, “No tattoos. Not girlfriends who have tattoos . . . Throw the football like a man, a perfect spiral.”

KR: For people like Paul, other people—even his own sons—are only useful as an extension of his ego. They are valuable only when they are under his complete control. Therefore, most likely, as the boys grow into their own they would rebel like most teens.

KN: One aspect of the book that really ramps up the tension and suspense is setting the action away from home. Characters are more in danger in less familiar or isolated surroundings. I was particularly interested in your choice of the locale. I spent many family reunions up in Port Clinton, so the Lake Erie community environs are familiar to me. What made you select this location?

KR: I raised my kids in Upper Arlington, Ohio, a town that is fictionalized as Grandville. We had a cottage at Lakeside and have such great memories of summers and weekends there. I loved the drive from Central Ohio up to the lake and I couldn’t imagine a more tense, suffocating setting than sitting next to each other in a car for a couple of hours. And then, the sweet perfection of Lakeside as the background to a sinister plot, to me, was irresistible.

KN: Who are your literary heroes? Are there any particular authors or works that have inspired you?

KR: I was an English Lit major, so I have too many author heroes to list here. BUT, I love Shirley Jackson, F. Scott Fitzgerald, Walker Percy, Eudora Welty, and Hemingway.

KN: Lastly, can you give us a heads up as to future projects?

KR: I am working on a new book, that is due to be published in Winter of 2019. I can’t wait for you to read it. And no, it’s not a sequel but Paul would love to have another book someday. 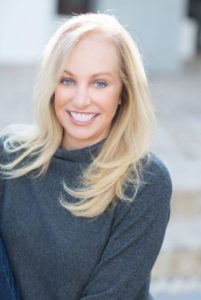 Kaira Rouda is the USA Today bestselling author of novels including Here, Home, Hope, The Goodbye Year, In the Mirror and All the Difference. Her stories explore what goes on behind closed doors of seemingly perfect lives. She lives in Southern California with her family and she’s at work on her next novel. Visit her website, KairaRouda.com.