Critics have described Disgruntled as “a smart, philosophical coming-of-age tale,” “entertaining and thought-provoking in equal measure,” “impressive,” and “a witty take on 1980s Philadelphia.” It is a book “where everything feels contiguous and real.”

We recommended Disgruntled here, and are now thrilled to discuss the book, and more, with its author Asali Solomon.

Kelly Sarabyn: Your main character Kenya grew up as an outsider – first, because her parents’ Africa-centric beliefs and lifestyle made her seem strange to other black children, and later, because her mother moves her to the mostly white suburb and enrolls her in an expensive all-girls school. You portrayal of Kenya coming of age on the outside of a dominant culture was very poignant, and something I think that is universal – in every culture, someone is forced to live on the outside. Do you think the downsides of growing up as an outsider – the loneliness, the insecurity – always outweigh the possible upsides – the increased empathy, the independence of thought, the perceptiveness? Do you think it was selfish of Kenya’s parents to not make an attempt to fit in with the local culture? I laughed when Kenya’s parents wanted her to help another ostracized child at school because it made them seem oblivious to her own diminished social standing. However, do you think that is partly because we are, now, much more protective of our children’s emotional lives than we were thirty years ago?

Asali Solomon: If you can survive it (thinking here of people who do things like wind up committing suicide or being hurt for being different) being an outsider is probably a necessary experience for writers to have. But at the same time, most people probably feel like an outsider at some point. Even the jocks and cheerleaders and frat bros — I imagine they’re crying inside at times, thinking this isn’t really me as a little violin plays.

Kenya’s parents do a number of selfish things, but I view the fact that they don’t fit in neatly with the local culture as part of their attempt to do better than their own parents. They want Kenya to be proud of being black and more enlightened than they were.  As far as the fact that they don’t care about her social standing at school – this is something I never thought about, but now that I’m thinking about it, it definitely accords with my idea of what parenting should be in a sort of old school way. We’ll see what happens when my kids start caring about stuff like that.

Ultimately, Kenya seems to identify more with her childhood neighborhood than the suburbs, even though she didn’t particularly fit in there, either. Do you think this is because the early years of our life are particularly formative, or is it because race and class distinctions posed the bigger divide?

AS: This is an extremely thoughtful question that gets to the heart of aspects of the book that it could take me years to explain. Toggling to my own experience here, I grew up in a black neighborhood in West Philadelphia. But the folks next door were always white. First they were elderly Italians. And as far as I knew, people left them alone. When they moved, a white couple moved in – two men. This was the 1980s in a black urban neighborhood. They broke up, but one of them is still there. Life was and is okay for him there – even through the crack epidemic! There are a lot of difficult aspects to living in working class/poor urban neighborhoods. But I believe it is true of black ones that they can be extremely hospitable in ways that wealthy white suburbs are not (and perhaps white working class ones are not as well). There is a cliché that home is the place where they have to take you in. I think for Kenya, and for a lot of other people as well, this would definitely be Kenya’s West Philadelphia neighborhood over the Main Line!

For Kenya there is the additional fact that she was abruptly taken away from her home. And while she felt ill at ease at school, she found moments of belonging in her actual house, even as her parents fought.

Kenya’s father is very philosophical. He is drawn to Julian Carlton, the butler of Frank Lloyd Wright, a “disgruntled” employee, who, upon being fired, killed Wright’s mistress and her two children, as well as four others. This could have made Kenya’s father Johnbrown seem delusional or even evil. But I wasn’t left with that impression – I interpreted his admiration as more metaphorical, as his way of longing to destroy a racist society that left few other options. Was I rendering him more “normal” than you intended? Do you think Johnbrown literally admired Carlton’s actions, at least when he was younger? Even metaphorically, does admiring Carlton represent a kind of nihilism and resignation, the thought that there is no way to effect enough change short of savage violence or complete destruction? 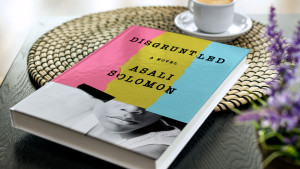 AS: There’s only one villain in the book – Teddy Jaffrey. Everyone else is a struggling human being. Johnbrown never kills anyone. The worst he does is fail at his relationships and exceed in a self-preserving hypocrisy. Perhaps his intense fantasy life about Carlton keeps him tethered to more ethical behavior in real life – so not a bad thing. I like your reading that his interest is metaphorical. He doesn’t really want to kill people, and frankly, if the Seven Days did go out and start killing, I’d put my money on Sheila first.

My reading of Kenya’s father Johnbrown was his philosophical beliefs were driven both by a sense of justice and by selfishness. I couldn’t quite untangle that, which is true to life – even with our own political beliefs, it is difficult to divorce them from what we would stand to gain by their realization. But did you intend otherwise – in your mind, was it clearer that he was driven either by a sense of justice or his own desires?

AS: He is definitely driven by both, but his narcissism wins. That being said, his intelligence and willingness to be an outlier are good qualities for Kenya to have.