One summer night, Anne and Marco Conti’s new baby, Cora, mysteriously disappears from her crib while her parents carouse at a dinner party next door. What starts out as every parent’s worst nightmare leads to growing scrutiny from the police, the couple’s mounting desperation, and eventually, suspicion within the family’s inner circle. What really happened to baby Cora? The Couple Next Door is a taut, psychological thriller that sweeps you from your feet and doesn’t let you go. Book Club Babble is pleased to interview its author Shari Lapena.

Kate Newton: First off let me say I can’t remember reading a book as fast as I did this one. I finished it in three days, which is a testament to how it grabs the reader and doesn’t let go! Can you tell us how you first got the idea for The Couple Next Door? 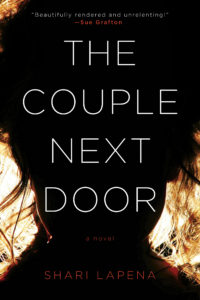 Shari Lapena: I was trying to come up with an idea for a thriller, and I knew I wanted it to be close to home. I’m not one to research spies and so on. One day the idea just popped into my head—what if a babysitter cancelled and left a couple in the lurch at the last minute? What would they do? Would they leave the baby at home asleep and go next door? What if they took the monitor with them? And to make it more interesting, what if they felt they had to leave the baby at home because the couple that invited them expressly told them not to bring the baby? And what if the husband thought it was okay, and the wife didn’t, and had to be persuaded? And then I had the kernel of my story, the jumping-off point. From there, it just took off.

KN: The theme of leaving a child alone is a hot-button topic in the media. I’m thinking specifically of the Madeleine McCann story a few years ago, and the many stories of children being forgotten in hot cars, etc. These incidents have inspired outrage in some, and understanding in others who can relate to being a parent and making decisions that, in hindsight, were the worst possible decisions. How did you go about making Anne and Marco sympathetic enough that readers would empathize with them?

SL: I got asked about the McCann case everywhere I went in Britain. I don’t think it was nearly as big over here in North America. We tend to get the situation of infants being left in hot cars, as you mention. It happens again and again. I remember hearing about a study on this—if you have some variation in your normal routine, and the baby is in the back seat, where you don’t see them, and asleep, so you don’t hear them, it’s easy for your brain to forget the baby is there. It’s an honest mistake, but so horrible.

I tried to make it enough of a grey area in my story that readers could understand what Marco and Anne were doing, even if they didn’t agree with it. First of all, the babysitter cancelled at the last minute. They weren’t planning on leaving her there alone—something happened that changed things. And then, the fact that their hosts expressly said the child wasn’t welcome—Anne and Marco didn’t want to be rude and bring her anyway. The houses are attached, not exactly across or down the street. They were checking on her every half hour. And they had the monitor—although the video screen was broken. I tried to create a series of small details so you could see how it might happen, how someone might do what Anne and Marco did, even if they had the best intentions. Does anyone really believe that someone might sneak into a locked house and steal their baby? Of course not. It seems ridiculous. Until it happens.

KN: You really delve into Anne’s psyche in this book. One of the most telling passages that really demonstrates her mental state is when the women from her new mothers group come to visit after Cora goes missing, bringing containers of prepared food. Anne sees it as, “Such kindness, and such thoughtless cruelty.” This really gives us a window into how Anne processes information. How did you go about building her mental state? Do you have a background and/or interest in psychology?

SL: I think every writer has an avid interest in psychology. I didn’t study it formally, but I’ve done a lot of reading on my own. And I watch what’s going on around me and I talk to people. I’m a sharer—I tend to be fairly honest about how I’m feeling, I don’t hide difficult things. And my friends tend to be the same way. So I know a lot about how other women, in particular, really feel. I think I might have tapped into my own feelings there. I had many miscarriages before I had a live baby, so I remember feeling the way Anne felt when well-meaning friends brought their babies around and I had just lost mine. 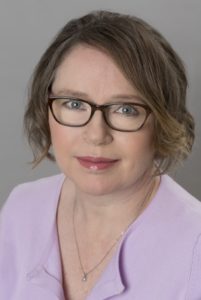 KN: The characters in the book are not cardboard cut-outs but three-dimensional people. I found myself flip-flopping back and forth between Anne and Marco, siding with one, than the other. Readers can easily relate to the character whose point of view the story is told from, and you do a great job of alternating back and forth. Did you use any specific writing technique to maintain consistency when writing in so many people’s “heads”?

SL: I don’t use any particular technique. I think I get right into the character—I completely identify with a character while I’m in that character’s point of view. So I never find myself slipping out of point of view at all—that’s not a problem for me. And I don’t seem to have a problem writing males versus females etc. I like to move around among different characters. I can know more than any one of them, and I have more access to the story that way, more control over how it unfolds.

KN: Not only did you write this story from multiple points of view, but you also wrote it in present tense, which is a hard trick to pull off. Not every story works in present tense, but this really ramped up the suspense factor. Was that your plan from the beginning, and did you encounter any challenges with this style of writing?

SL: Yes, it was a conscious choice right from the beginning to write the story in the present tense. That and the multiple point of view. Present tense is the right choice for a fast-paced story like this one that takes place over a short time and you want that sense of immediacy and urgency. I didn’t encounter any problems with it that I can recall. It was the first time I’d written a book in present tense, and it felt right for this particular story.

KN: As a writer, I consider the suspense genre to be the hardest to write in. You have to keep readers at the edge of their seat, but not drag out the twist so long that they get antsy or feel manipulated. How did you go about setting just the right pace for the plot to move along?

SL: Pacing is so important. I knew when I set out to write this book that above all, I wanted it to be a page turner. I wanted it to move really quickly. But once I made that conscious decision, it kind of happened naturally. There are tricks of course, to help a story move along. Short chapters with cliff-hangers at the end are always good. But mostly I think I had to have a lot happening in each scene. Each scene had to be doing a lot at once—revealing character, advancing and complicating plot, raising questions and foreshadowing future events. And always lots of unanswered questions—people read to find out the answers. Curiosity is a wonderful thing.

KN: Who are your literary heroes? Are there any that particularly inspired you?

SL: I grew up reading Agatha Christie, Josephine Tey, Daphne Du Maurier, Patricia Highsmith. I don’t know that any particular writers inspire me over any others, but I love a good story, especially with psychological suspense.

KN: And lastly, can you tell us about your next project?

SL: Only that it’s a thriller. I can’t tell you any more about it than that, but it will be a page turner!

KN: Thanks for taking the time to chat with us, Shari. We’ll keep an eye out for your next book.

Shari Lapena was a lawyer and an English teacher before turning to writing fiction. She has written two previous novels: Things Go Flying, shortlisted for the 2009 Sunburst Award, and Happiness Economics, a finalist for the Stephen Leacock Medal for Humour. She lives in Toronto. The Couple Next Door is her suspense debut.