When Dawn rents a house in Santa Monica for a romantic getaway with her husband, she expects to return home with fond memories and her security deposit. But Miranda has other ideas, and withholds some of the money, alleging damages. What follows is a battle of determination between two very different women, each harboring a secret that will not allow them to let this go. This Is Not Over is a riveting, “she said-she said” drama that ratchets up the tension for readers until the final pages. Book Club Babble is pleased to interview its author, Holly Brown.

Kate Newton: The idea for this story came from your own experience. How often do you use events from your life to form ideas for your books? Do you feel there are any pitfalls to writing from experience? 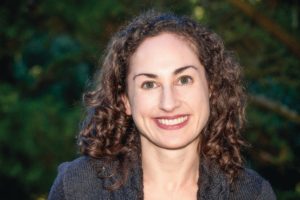 Holly Brown: This is the first time! I didn’t really write from experience since I just borrowed the initial situation and then created Miranda and Dawn, who did the rest. I think a pitfall for me in writing from experience would just be the self-consciousness factor, but since I’m very different from my characters, I didn’t have that at all.

KN: Both Dawn and Miranda have distinct voices as characters. They are also both very introspective. To what extent are their self-analyses accurate, and do they become more or less so over time?

HB: I believe that everyone is employing some form of self-delusion at all times. Complete self-awareness is just impossible (and honestly, too brutal for any of us to bear.) So I like to use self-delusion in constructing my characters. It makes for unreliable narrators, which leads to a lot of surprises for the reader. I feel like Miranda and Dawn are both introspective but also in denial about certain realities that become much more evident throughout the book.

I don’t want to give too much away, but I feel like one of the characters becomes more accurate, while the other becomes less so.

KN: To a large extent the Internet has allowed people to hide behind fake personas. Thad and Miranda, for example, each present identities that don’t really match their true selves. Do you think people sometimes become their Internet identity if they keep presenting a false front long enough?

HB: That’s a risk, for sure. And it’s an even bigger risk to society, in a way, because often fake personas online are meaner than the real-life counterparts. People allow their basest selves to take over, and it can be contagious when others join in—like in cases of cyber-bullying.

The culture feels like it’s becoming nastier, so you have to really fight to stay authentic and to stay kind. My characters aren’t engaging in that fight, so it’s a little bit of a cautionary tale in that regard.

KN: Both characters have secrets from their pasts that to a large extent have shaped their lives. How might Dawn have turned out if she hadn’t had such a troubled past with her father? And how might Miranda’s marriage have been different if her husband hadn’t undergone the incident in his medical residency? 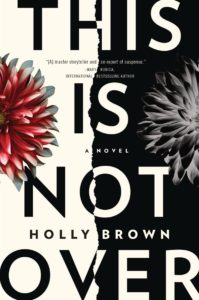 HB: I don’t think the book would have existed then. Both women would have stopped things before they got so out of hand, because there wouldn’t have been such raw nerves. Their insecurities fuel a lot of the escalation, which is what I believe often happens with bad behavior in real life. Instead of turning inward and owning our damage, we project it onto other people.

KN: Dawn and Miranda have troubled relationships with their mothers. Each of the mothers are dependent on their daughters for different reasons. Even as adults, we still look to our mothers for advice. But in both cases, Dawn and Miranda are more caretakers than children. How does this shape their outlook and approach to problems?

HB: There’s a term for that in psychology: parentified children. It tends to mean that children didn’t get to be children; they didn’t have their own emotional needs met. So Dawn and Miranda are each feisty, in their own ways. And they still have emotional needs that are going unmet, which is part of why there’s so much unexpressed anger inside them that gets unleashed on one another.

KN: Class is a big issue for both characters. Dawn is clearly defensive about her background. Miranda seems to resent being perceived as more financially secure than she really is, yet she makes comments like “[Dawn] is currently a communications major at a lowly state school.” Would you agree that both characters might be happier if they hadn’t been so hung up on class?

HB: Absolutely! They’re both trying to prop up their own egos and it’s clearly not working. They’re looking to find their self-worth in all the wrong places.

KN: Miranda has a complicated relationship with Thad. At times it appears she doesn’t love him as a son but in fact fears him, even when he was a child. Are her feelings justified, or is she creating a situation that doesn’t exist?

HB: Parenting is terrifying! You’re responsible for the emotional and moral development of another human. In Miranda’s case, she takes this responsibility seriously, and is tortured by it. I think that part of what causes her disconnection from Thad is that she is so highly anxious about how he’s turning out, and that actually impedes her ability to simply be with him in an accepting and non-judgmental way, which is what he (and all children) really want. And that disconnection then leads to some of his acting out. So it’s really a terrible negative cycle.

KN: Dawn has a moment of realization when she asks, “Is it really possible that I’ve been seeing this all wrong, that I’ve been the one bullying her?” She credits Professor Myerson and the class project for helping her see this. Is this the only way she was going to figure it out, given her limitations?

HB: Hmm, I guess that’s the way I chose to do it, dramatically. I think that it’s mostly likely that an external event or perspective would be the catalyst, though sometimes people do it with introspection alone. It seemed more realistic to me that she needed to be jarred out of her way of thinking, since it’s so powerfully seductive to her to make Miranda wholly wrong and to make herself wholly right. She needs someone to give her a good shake in order to expand her way of seeing.

KN: When readers have a favorite character, they often love to see a sequel or at least know what the future holds. Where do you see each character one year from the end of the book?

HB: I think of my endings as being something like Rorschach tests—you know, those ink blots where people can see what they want. I feel like depending on how you feel about Miranda or Dawn, you might want one outcome more than another. You might want one or both of them to wind up happy, or its opposite. I like to leave that to the readers’ imaginations.

KN: Aside from being a writer, you’re a mental health professional. Would you care to give us a quick evaluation of the characters in the book?

HB: They’re traumatized, but when the novel starts, they don’t know it. I think that by the end, maybe they do, and they see that there’s work to be done. They can’t just go on being one another’s bogeyman indefinitely.

KN: Lastly, I understand you’re at work on a fourth novel. Can you tell us a little about it?

HB: It’s a workplace thriller that’s very inspired by the recent climate toward women, which I think is not terribly good. Or maybe it’s just being exposed more recently. It’s a quick, fun read that gets at feminist issues, without being political. Hopefully, it’ll spur a lot of discussion.

KN: Thanks so much for giving us the opportunity to feature This is Not Over. Best of luck with your future projects!

Holly Brown is a practicing marriage and family therapist living in the San Francisco Bay area. Her blog, Bonding Time, is featured on PsychCentral.com. This Is Not Over is her third novel.