Aptly titled, Michael C. Bland’s debut novel The Price of Safety challenges us to consider just how much privacy and personal liberty we are willing to give up in exchange for public safety. Set in the near future, scientist Dray Quintero is forced to flee with his teenage daughter after she’s committed a serious crime. They must stay one step ahead of the surveillance technology Dray himself helped to design. Hunted and on the run, they find themselves turning to a domestic terrorist organization for help. But all is not as it seems, and something rotten has taken root in the very fabric of society.

I’m pleased to welcome Michael to BCB today to talk about his novel.

Tabitha Lord: The Price of Safety is set in the not-so-distant future. How did you deal with creating futuristic technology that 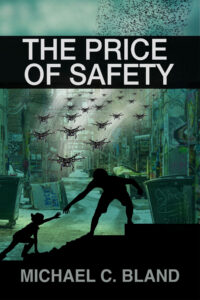 still needed to feel real enough and familiar enough for readers to buy in? What kind of research did you conduct?

Michael C. Bland: I absolutely wanted to make it familiar enough for readers to buy in! If I failed that, I’d lose the reader. I approached this story by researching the latest achievements in computing, robotics (including nanotechnology), visual technology, and fusion research. I then tried to determine how far we will advance in these areas by 2047, partly by looking back to see how far we’ve come in the past thirty years. We’ve come a long way from the Discman, pagers, and brick cell phones of 1990, and thirty years from now, we’ll have technology that will be unbelievable compared to what we currently have.

I read articles that predicted the future—not because they were accurate but to get a sense of possibilities (although some of the predictions were humorous). For the most part, however, I focused my research on technological achievements, as well as the latest theories on dark matter. I then crafted my own theories based on that research, and built my story from there.

TL: For me, even more interesting than the cool tech you’ve woven into the story is this underlying theme…How much privacy are we willing to sacrifice in the name of safety? When you began writing, was this a question you started with, or did it evolve over time? Were there other ethical questions you consciously wanted to address through your storytelling?

MCB: Thank you! It wasn’t the question I started with, but it evolved as I developed the story. I started with the idea of a man struggling to protect his family. That remained the core of the novel, because I built everything around that idea. To create conflict, I focused on what kind of environment would make it nearly impossible to protect those Dray Quintero (the main character) loves. I decided that it would be a world where he couldn’t hide. Where his family couldn’t hide. Where he can’t control who watches and tracks them. This made me think about how we as a society would get to the point where we allow ourselves to be monitored to such a degree. If that kind of scrutiny kept us safe, and our loved ones safe, we would allow it—but it comes with a heavy price and becomes a major obstacle to Dray’s efforts.

This led to another theme: what price do we pay for the technology we have? Already, we have technology that would’ve seemed fictional thirty years ago: the knowledge of history and science and understanding at our fingertips, the ability to access people across the globe with a few strokes, technology that can pinpoint where we are and monitors our progress, robots that walk and react independently of any human, etc. But at what cost?

TL: I understand you are planning a sequel to The Price of Safety. Without spoilers, can you give us a little hint as to where Dray’s journey will take him next?

MCB: In The Price of Safety, Dray’s efforts to protect his family drive him to make an unexpected, desperate decision. The sequel shows the ramifications of his actions, the opportunities that arise, and events that Dray never sees coming as he’s pulled in deeper. His challenges, and sacrifices, will be greater than he ever would’ve anticipated. I know that’s a little vague, but I don’t want to spoil the surprises I have in store.

TL: Can you tell us a little about your writing process? For example, how much of an outliner are you? What time of day do you find you do your best work? How long did it take you to finish the first draft?

MCB: I am a heavy outliner. I tried being a pantser once, but it went horribly. So I outline everything. This was especially important for The Price of Safety, as I had to make sure the world’s logic remained true throughout. (In fact, I had to redo sections of the book to make sure the story made sense.)

I work best in the mornings. I’m an early riser, and my productivity declines throughout the day, so the more I can accomplish in the morning, the better!

It only took me about three months to complete the first draft…but that was after a year of outlining (as I said, I’m a heavy outliner). I then took another year and a half to edit the novel. The effort was worth it, as the first draft was so rough it was painful.

TL: As a science fiction writer, have you read or watched anything recently that you’ve found particularly interesting or thought provoking in the genre?

MCB: Forward, a collection of six short stories, was thought provoking and very well done. I also enjoyed both Dark Matter and Recursion by Blake Crouch. Dark Matter was an insanely clever novel about cutting-edge technology wrapped in a high-speed thriller and told in a way that the scientific theories were explained in a (relatively) easy way to understand. Recursion was an equally-clever story where technology is used to rewrite…everything.

TL:  Michael, it’s been a pleasure. Thanks so much and good luck with your next writing project!

Michael C. Bland is a founding member and the secretary of BookPod, an invitation-only, online group of professional writers. He writes the monthly BookPod newsletter where he celebrates the success of their members, which include award-winning writers, film makers, journalists, and bestselling authors. His short story “Elizabeth”, won Honorable Mention in Writer’s Digest 2015 Popular Fiction Awards contest. Three of the short stories he edited have been nominated for the Pushcart Prize. Another story he edited was adapted into an award-winning film. He also had three superhero-themed poems published on The Daily Palette. Michael currently lives in Denver with his wife Janelle and their dog Nobu.

Are you an author?

Help us improve our Author Pages by updating your bibliography and submitting a new or current image and biography.
Learn more at Author Central