In If I Forget You, Mr. Greene constructs a unique story, expertly handling the tools of elegant descriptive language and thoughtful considerations of what it means to love, learn, and grow. As he describes the current and past relationship of Henry Gold, a poet, and Margot Fuller, the daughter of an influential family, Greene honors the uniqueness of their particular journeys with his determination to combine words in an equally inimitable way. These two lovers, who were forced apart after a short and passionate affair but reconnect two decades later, feel distinctly real, a credit to the author’s dedication and talent. BCB is very pleased to introduce Thomas Christopher Greene!

Amy M. Hawes: You choose to use third person present tense in If I Forget You, which is illustrated in the quote, “Henry stands at the edge of the curb, watching the traffic flow around the circle and then disperse. In the movie version of his life, he would be more decisive.” For me, this choice created a distance between the reader and the characters that became a metaphor for the initial temporal distance between the main characters, Henry and Margot. Was this an intended affect?

Thomas Christopher Greene: These are always hard choices, whether to write in third or first, or past and present. The present tense choice was around creating immediacy, but it also has certain limitations, especially on perspective. Initially, I thought I would do the current events in present tense and the past events in past tense, but I liked how it felt to do both this way, as if one could simply fall into either time depicted in the novel. I hadn’t thought about it mirroring the temporal distance between the two characters, though I like that idea.

AH: Henry persistently sees the poetry in things, and especially in his college lover, Margot: “ . . . the essential memory of her, has been his one constant truth, like a poem he has committed to memory and holds always in the back of his mind.” How easy or difficult was it for you to have Henry experience life through a poet’s eyes?

TG: I’m not a poet, obviously, but a fiction writer, and the two have much in common. We each wrestle with the blank page, try to shape meaning out of words and stories, and try to find some deeper truth in the process. So that part felt true to me. This is not an autobiographical novel, but much of Henry’s ‘becoming a writer’ story is very similar to my own. I, too, was a college athlete who started writing and found my passion through the encouragement of great teachers. It gave a definition to my life that had been lacking before and it was fun to revisit that personal evolution that happened to me many years ago through Henry’s eyes. So in that sense it was easy. It was much harder in a previous novel, say, to write from the point of view of a fisherman.

AH: In my opinion, Henry’s essential nature traverses the space between past and present with little alteration. He begins as a college student with a dream of being a poet and capturing the heart of Margot. Poetry and Margot are strong currents in his soul, and he finds his steadiness in them. Margot does not find equal stability. In the end, we long for a change in Margot as much as for their success as a couple. How did you navigate this contrast without making Margot come across as unsympathetic?

TG: I hope I succeeded, though I am sure some readers will wonder how sympathetic Margot actually is. For me, though, I have come to know a lot of Margot’s ‘children of privilege’ who move naturally into a life with many advantages, but underneath lies a lot of sadness. She lives in a glass prison of sorts, and we hope she will finally break out and that Henry will be the impetus for that.

AH: Henry comes from a family with limited means, while Margot’s family is extremely wealthy. Yet, they each experience both freedom and restriction as it relates to their social status. I’m curious if you have an opinion of which upbringing offers more freedom and which offers more restriction?

TG: That’s a hard one. Obviously, if you’re born wealthy you don’t have to worry about the basic things that so many people have to worry about in this country of ours – where your next meal might come from, where you might sleep at night, whether or not you are a week away from being homeless. So there is no doubt that on the basic and critical matters of life, you have more freedom when born into means. There is also an illusion that America is a meritocracy when in fact the vast majority of us stay in the same circumstances into which we were born. That said I am glad I wasn’t born into wealth. Most of the truly rich I have known would never tell you they feel trapped but they often act as though they are. It’s a gross generalization but they seem to struggle more with living a meaningful life, as if growing up with money kills ambition.

AH: Henry decides to be a poet. Yet, Margot decides very little in her life. In fact, her most emphatic “decisions” are often simply statements against being controlled that have no positive outcome. This unwillingness to make her own decision with regard to her relationship with Henry seems to be a reflection of how she relates with herself. Do you believe the choices we make in our relationships reveal the nature of our internal lives?

TG: Yes, definitely. But remember, I do think there is more for Margot to do to break out. Her whole life she has been told how her life would unfold. This speaks to the previous question, I think, the idea that the lives of privilege are by definition more scripted.

AH: You’re a writer whose main character is a poet and hence a type of writer. A theme that Henry reinforces is: “Don’t self-edit too quickly.” This statement rings with truth. As a writer, was this an important lesson for you to learn?

TG: Absolutely. Most of what we write is going to suck, and if you self-edit too quickly the fear of failure will become paralyzing and you won’t have the opportunity to write something really cool that you discover when you go back and start revising later and see this gem sitting in the middle of a huge field of suckiness. So you have to put the clay on the table, as it were, and then begin to shape.

AH: Henry never hides from the vulnerability inevitable in loving Margot. Also, in order to have an authentic voice as a poet, he makes himself vulnerable in his work. Margot has no such training. In fact, her affluent background has trained her to pretend and protect. Do you view Margot’s journey as the more difficult one to take? And, perhaps the more beneficial?

TG: They both have one job to do which is to escape. And ironically, each of them in different ways represent the opportunity, or the fulcrum by which an escape can happen from their circumstances. Now, Henry grows past this and doesn’t need Margot anymore for that. He is out. But the love for her still drives him. Margot, in middle age, is back where Henry was in college. So, yes, her journey is more difficult in the present and if she’s successful, will undoubtedly be an awakening of sorts.

AH: At separate moments Margot says to Henry and Chad (her current husband) that she doesn’t deserve them. Chad says this is true. To Henry, it is a moot point. Is that the nature of true love? Loving whether or not someone actually deserves it?

TG: I am a darker romantic than that. I think true love is whether or not you are willing to die so someone else may live. 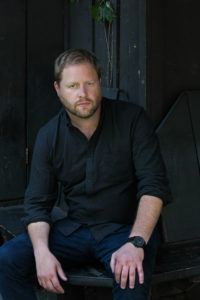 Thomas Christopher Greene is the author of four previous novels: Mirror Lake, I’ll Never be Long Gone, Envious Moon and The Headmaster’s Wife. His fiction has been translated into 13 languages. In 2008, Greene founded Vermont College of Fine Arts, a top graduate fine arts college, making him the youngest college president in the country at the time. He lives and works in Vermont.