Set in pre-WWII Italy during the rise of Mussolini, Hotel Portofino is a beautifully crafted historical fiction novel that’s sure to appeal to fans of Downton Abbey, the Crown, and other period dramas. Having convinced her husband to uproot their family from Kensington after the war, Bella Ainsworth is now the co-proprietor of the Hotel Portofino, newly opened villa to wealthy English and English-speaking guests. When a corrupt local politician blackmails Bella, the Hotel Portofino becomes embroiled in the advance of fascism. The novel expertly combines character journeys, family drama, and political intrigue with authentic historical ambiance to produce an engaging and entertaining tale. Hotel Portofino, the television series, will be coming to PBS in 2022, so stay tuned!

Tabitha Lord: The sense of place in the novel is so vivid – both the hotel and the surrounding area of Portofino. Have you spent much time there? Related, you’ve obviously gone above and beyond the Google search with your research. Can you talk about your research process, and how you integrated it into your storytelling? 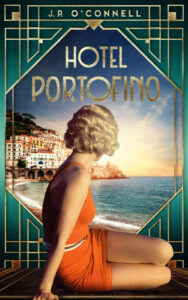 J.P. O’Connell: It’s kind of you to say that because I must admit, I’ve never actually been to Portofino. That said, I’ve spent a reasonable amount of time in Italy over the years. So the research process involved drawing on personal memories of those holidays, but supplementing them with old-fashioned desk research. To get a sense of what the Italian Riviera was like in the 1920s I read a lot of travel books from the period and novels like Elizabeth Bowen’s The Hotel from 1927. For the English-in-Italy mentality, the best place to start is EM Forster so I re-read Where Angels Fear to Tread and A Room With a View.

TL: Do you have a favorite character from the story?

JPO: That’s such a hard question. For me the most intriguing characters are the ones who are the most ripe for transformation. So someone like Nish moves from ‘fitting in’ with this upper-class English colonial world, which he can do because he was educated in England and in many respects passes as English, to deciding that his future lies beyond it, both because he’s gay and because he isn’t afraid of activism and its consequences. Constance is interesting too. She’s very resilient because of what she’s been through, and we have a sense that this resilience might, in the future, lead her to all sorts of extraordinary places.

TL: Hotel Portofino will be coming to CBS in 2022. Can you share anything about the upcoming production?

JPO: The show looks extraordinary – really sumptuous and transporting, with some great performances by Natasha McElhone, Anna Chancellor, Mark Umbers, and Oliver Dench (Judi’s great-nephew). It was filmed in Croatia as well as Portofino, but you won’t be able to tell the difference.

TL: Your writing is quite varied – from newspaper and magazine articles to an analysis of David Bowie’s favorite books to this latest historical fiction novel. How do you choose your projects? Do you find the skillset required for non-fiction writing complements your fiction and vice versa?

JPO: I like to mix things up. It keeps me on my toes. My background is in arts journalism so I’m very comfortable writing about books, music, and film. As for whether that helps with writing fiction – I think it’s made me quite an efficient researcher and research is essential, especially with something like a historical novel where you need that verisimilitude. So I know where to go to find what I need.

JPO: I’m looking forward to starting Putin’s People: How the KGB Took Back Russia and Then Took On the West by Catherine Belton, which has been the subject of high-profile libel actions here in the UK. I’m currently reading a ‘locked room’ crime novel from the 1920s called The Wintringham Mystery by Anthony Berkeley. It was originally published as a 30-part newspaper serial with a huge cash prize for anyone who could work out the solution. And nobody could, not even Agatha Christie – though she did win a runner-up prize!

TL: Thank you so much, and best of luck with your future projects. I look forward to checking out the series!

J.P. O’Connell has worked as an editor and writer for a variety of newspapers and magazines including Time Out, the Guardian, The Times and the Daily Telegraph.  JP has also written several books including a novel, a celebration of letter-writing, a spice encyclopaedia, and most recently an analysis of David Bowie’s favourite books and the ways they influenced his music. JP lives in London.