Book Club Babble is pleased to continue our discussion on Women’s History. March is over but the story isn’t finished and never will be! Nancy Rubin Stuart has written seven acclaimed nonfiction books on women and social history. Her most recent include DEFIANT BRIDES; The Untold Story of Two Revolutionary-Era Women Who Married Radical Men and THE MUSE OF THE REVOLUTION: The Secret Pen of Mercy Otis Warren and the Founding of a Nation.  She is currently writing a new book for Beacon Press about Benjamin Franklin through the lens of his women.

Amy M. Hawes: Why is it important to tell the stories of women who made history?

Nancy Rubin Stuart: Since most women remained uneducated until the late 18thcentury in Britain and in North America (and still aren’t in many countries today), their history has been lost. That has contributed to the invisible and second-class status of women around the world today. In recent decades feminist historians and writers have scoured the diaries, letters, accounts, and descriptions of prominent women to produce new books and reinterpretations of historical events. Still much more work needs to be done to explore the lives of women– the other half or “herstory” of civilization.

The biggest challenge writers and historians face is discovering records of women’s lives, especially those written in their own voices. Most of what is commonly regarded as “history” has been written by men.

Are women’s stories difficult to uncover? Yes, especially those of historical figures.

NRS: Until the twentieth-century advent of reliable birth control, women spent most of their lives pregnant, nursing and child-rearing. That left very few opportunities for them to achieve their dreams outside the family circle.

NRS: Both Peggy Shippen Arnold, the wife of Benedict Arnold, and Lucy Flucker Knox, the wife of 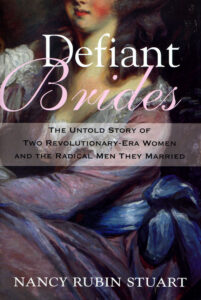 General Henry Knox in Defiant Brides, were attractive and madly in love with their husbands. Despite difficulties and disappointments, both women were devoted wives and mothers who supported their men and looked to them for guidance.

NRS: While the achievements of a female historical character offer indisputable proof of their accomplishments in the past, a fictional character offers readers a look at the possibilities for the future.

NRS: Ideally, women and men will be viewed equally in the future. The recent cry for equality is beginning to change the dynamic between women and men. Still, I suspect it will be a long time before that becomes a reality because of the deep-rooted traditions that favor men.

Authors can contribute to that by continuing to discover forgotten historical women, especially those in good relationships with men. They can also do so in novels by creating fictional characters in similarly positive relationships.

I believe in the power of the written word and its ability to model social change.