In her debut novel Her Name is Knight, Yasmin Angoe masterfully delivers both style and substance with the confidence and expertise of a seasoned author. As a Ghanian American, she has the emotional street cred to create a story which incorporates the best and worst of both cultures.

Nena Knight is a highly skilled assassin whose early years violently shifted from bliss to tragedy when a jealous friend takes revenge on Aninyeh’s (Nena’s) father by destroying their village and selling Aninyeh into slavery. Aninyeh renames herself Nena when she’s adopted by the Knight family, who lead the influential business syndicate called theTribe. The Tribe’s goal is to reclaim Africa’s autonomy by creating a united front in international business dealings. And if someone needs to die to make that happen, well then, Nena’s the woman for the job. She never questions her assignments until one night she gets to know her mark and begins to suspect this one doesn’t deserve to die like the others. Her instinct proves both more correct and more complicated then she could’ve ever anticipated. Her act of defiance opens an old wound while also providing a path to its healing.

It comes as no surprise Her Name is Knight garnered a seven-figure deal to turn the novel into a television series. Angoe’s story is smart, exciting, and emotionally layered. I’ll be chatting with Yasmin on Facebook Live on Wednesday, November 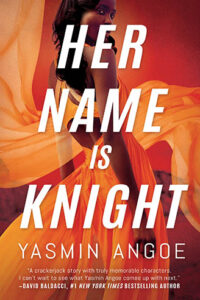 Yasmin Angoe is a first-generation Ghanian American from Northern Virginia where she grew up in two cultural worlds. In 2020, she received the Sisters in Crime Eleanor Taylor Bland Award for Emerging Writers of Color and is a proud member of SinC,
Crime Writers of Color, and International Thriller Writers.

Yasmin was a middle and high school English teacher and currently works as a freelance developmental editor. When not writing or editing, she is either watching movies, engrossed in a new audiobook, or daydreaming about the fact she probably should be writing. She lives in Columbia, South Carolina. You can learn more about Yasmin here.