Ellery Stevens plans to kill herself. Her sister’s tragic death, for which she blames herself, still haunts her, and the weight of guilt and loss seems never to abate. But Ellery’s plan fails, and she’s forced to live just a little longer. Laced with equal parts tragedy and humor, Teach Me To Forget compassionately and bravely tackles the subject of teen suicide. Ellery’s voice is authentic and her pain heartbreaking. But the book also finds hope and joy blossoming amidst the angst. I’m so pleased to welcome Erica Chapman, author of Teach Me To Forget, to BCB today.

Tabitha Lord: Suicide is an important, if deeply disturbing, subject and I know you have a personal connection to it. Why did you choose to write this novel? Did it bring you any closer to making peace with the devastating event that touched your life?

Erica Chapman: It is such an important topic, and I wish it were talked about more. A lot of what gets discussed in the media regarding suicide only covers the period after the death, not before. I recently read about a young girl who hung herself on a live feed. It’s so tragic, and I know we all want to know why? She had so much more life to live. She was just 12 years old. But it happens every day.

I chose to write TMTF because I lost my dad to suicide when I was 16. His death left me with a lot of questions. I was angry, confused, hurt and I didn’t know how to channel all that, so I wrote it down. I started with poetry and wrote that for years then when I was in between jobs I wrote Teach Me To Forget. I do think writing it brought a sense of understanding about what he did and answered some questions I had. I have depression myself so I pulled from my experiences in the book as well.

TL: SPOILER ALERT! As dark as the story can get, you end with hope – with Ellery choosing to live. But I like that you don’t sugarcoat the healing process. You don’t gloss over the lasting effects of trauma and loss, or the life-long commitment necessary to manage our own mental health. Was there a message for your readers here?

EC: I didn’t intend for a message, exactly. I wrote the story with no preconceived notions of what it would be about. I just wrote what I was feeling at the time. Although, I think the best messages are organic. I just wanted to write a story about someone who was determined to die so I could have that chance to be in her head. I’ve found when I’m confused or hurt that empathy is a strong problem solver for me. If I felt what he felt maybe I could understand, ya know?

I would say one of the most important messages of this story is that it’s not easy. Like you said, there’s no sugarcoating the healing process, it’s messy and hard, and it will hurt, but it’s necessary. And as someone with depression, anxiety, and OCD, I know it’s an everyday battle that takes a lot of energy to win. Some days I win and raise my hands up high and some days I can barely get my arms above my head. But we fight on because there are wonderful moments in this life waiting for us!

TL: A huge impact of suicide is the effect it has on survivors. I have a good friend whose brother took his life, and the shadow it casts over the family is omnipresent. The supporting characters in your book feel very authentic. It seems like their part in the story was important for you to explore. Can you talk a little about some of those characters, and how they help round out the picture of this complex crisis?

EC: I’m so sorry about your friend. I hear that all too often these days, unfortunately. That’s such an accurate way to say it, “shadow it casts over the family.” I truly think when someone takes their life it leaves a lasting impression on everyone that person has touched. This could be said for death in general, but suicide, in my opinion, is different because the person chose to die. That’s a really haunting thing for people to grasp. At least, for me, it was.

As for the secondary characters, I actually got the idea of Colter’s role in the story from a movie, What Dreams May Come, an absolutely tragic and beautiful story with Robin Williams as the protagonist. In the scene that inspired me, his wife has committed suicide and is sent to a type of hell – not really hell, they just can’t see past their own tragedy to get to “heaven” – and Robin Williams’ character travels down to her (he’s dead too) and tries to rescue her but he realizes quickly that it’s a lost cause, she will never see past her own pain. So he decides to join her in hell, even though he knows in a few seconds he will no longer recognize her and will be in his own hell. Watch this movie, it’s so good. It’s heartbreaking. But I pictured Colter like Robin Williams’ character, devoted, so in love that he’s not willing to leave her behind. Sigh.

Jackson is your all-around nice guy, he’s the one Ellery, the main character, turns to for pretty much everything. He’s reliable, consistent and for her, he’s an escape from her guilt and pain because he’s always so happy and jovial, laughing. He’s that one friend who can make you smile on your worst day. He may have an inkling that she’s sad, but she’s done a good job of fending him off her suicide mission.

Dean, oh Dean, he’s more determined than Ellery to die. There were several readers who told me his storyline wouldn’t work, but I felt so strongly that it was important. We have to see her reaction to someone else who wants to do the same thing. It tells us so much about her.

Wow! That was long!

TL: But the characters are so memorable and well-crafted, it’s worth it to give readers a sense of them! You sprinkle a healthy dose of humor into this book. One of my kids is a screenwriter, and he likes to say that humor is the flip side of horror, or in this case, darkness. Do you agree with his premise?

EC: Yes! Smart kid! I completely agree. For me, humor is a must, especially when you’re dealing with such serious subjects. A sense of humor is as important to me as breathing. It’s the only way I’ve survived all the turns in life’s road. It never leaves. Look at Robin Williams, he was hilarious but died so tragically by suicide, even. I’m talking a lot about Robin Williams but his story is so tragic. It’s been said that the funniest people are the most broken, and I agree. If you think about the exceptionally funny people, their pasts are littered with tragedy or some type of sadness. For me, there will always be humor in my books because that’s how I am. Plus, who doesn’t like laughing while crying?

TL: I’ve read that you are a huge Star Wars fan. Me, too! So I’m going to go there – I’m pretty devastated by Carrie Fisher’s passing. She was the heroine who showed me women could lead the rebellion, not just follow along. And as an adult, she showed us all that we could be imperfect and still have a perfectly phenomenal life. Her advocacy for mental health awareness surely saved lives. Shall we pass the tissues and raise a glass in her honor?

EC: *Sniff. Raises glass.* Oh man, yes. We lost a wonderful soul in her. I loved how she just didn’t take any crap from anyone. I loved her advocacy of mental health and her unapologetic nature about her own mental illness. We need more like her in this world. On an exciting note, who’s excited for the new Star Wars movie this year?? AHHH!

TL: In addition to dark, emotional novels, you also write lighter contemporary books. Can you tell us a little about that work and some of your upcoming projects?

EC: Sure, thanks for asking! I usually use the ratio, one darker book for one lighter book. I find after I write a darker one I need a break, and my most recent is a YA Dirty Dancing with bits of Jane the Virgin at summer camp. I’m getting ready to do a big revision on it. After that will be a darker one about a girl whose grandma asks her to mercifully end her life. I’m also super excited to have a short story in Eric Smith’s adoption anthology Welcome Home, published by Jolly Fish Press, this year.

TL: What are the top three things you want your readers to know about you?

EC: First, as I wrote above, I have depression, anxiety, and OCD. I also have a therapist who has helped me more than anyone else in my life. I don’t want there to be a stigma in saying that my brain is sick. It’s okay not to be okay. I am a strong advocate of talking about the subjects that make us uncomfortable. Only then will we be able to start to understand each other and accept each other for who we are, not what we want each other to be.

Second, I have been an editor, literary agent intern, and mentor. I love helping other writers see their potential. I think it’s so important to continue to support one another. I love talking to other writers and readers!

And third, I’m so proud to be a part of a YA community who continues to advocate for the rights of others, supports fellow writers, and voices opinions about important subjects. We need these voices more than ever.

I’d like to add a shout out to some amazing books and writers who are dealing with important subjects like suicide, sexual abuse, bullying, self-harm, and mental illness. These are tough topics but they are so important. Books like Girl in Pieces by Kathleen Glasgow, The Way I Used To Be by Amber Smith, and Made You Up by Francesca Zappia. Books by Jennifer Niven, Jennifer Brown, Laurie Halse Anderson and so many others.

TL: Erica thanks so much for chatting with me today, and congratulations on a beautiful debut novel.

EC: Thank you, Tabitha, for having me on your wonderful blog! And thank you readers – you make my days brighter!

Erica M. Chapman is a young adult author who writes dark, emotional novels with a burst of humor, and lighter 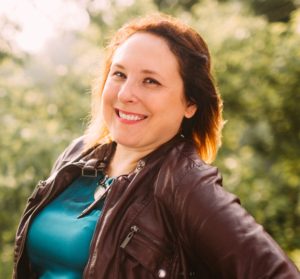 contemporaries with smart-ass protagonists. Her first novel, Teach Me to Forget was published by Merit Press in December 2016. Her writing is represented by the lovely Christa Heschke of McIntosh & Otis. She’s a member of SCBWI and a lifetime Lions and Michigan football fan who loves alternative music. She blogs, tweets, and watches various CW & Freeform shows while typing her next story on her Mac-Book and wearing a Detroit Lions Snuggie.