Dramatic climate change, super-cool future technology, and artificial intelligence combine to create the near-future world in Sarah Lahey’s Gravity Is Heartless. Quinn Buyers is a climate scientist who is about to get married. Ironically, her nascent hope for a future filled with love and meaning gradually emerges after she cancels the wedding and catastrophe strikes. Quinn travels the world but her journey is one of the heart. We are so pleased to chat with Sarah today!

Amy Wilhelm: Gravity Is Heartless is set in the near future of 2049. How did you arrive at that date? Do you think the world you’ve created could become our reality in twenty-nine years?

Sarah Lahey: I have three adult children and I wanted to consider what the lives of their children, my potential grandchildren, would be like. So, I set the novel one generation ahead, and asked myself, what would it be like if I went to sleep tonight and woke up in 29- or 30-years’ time?  2049 posed a lot of questions about how the future would look; how will humanity survive the oncoming effects of climate change? Would we still be living in a democracy? What technologies and communication platforms would we be using?

Most of the new technologies and world-building ideas in the novel are based on considered predictions. These include ideas like the fall in the production of wine and coffee, due to climate change. But some are already existing scenarios, like the use of automation in vehicles and homes, and medical breakthroughs like CRISPR gene editing, which are happening right now. So, the future world depicted in the novel is already a reality, but it may not be mainstream. While many of these new technologies are possible, like quantum computing, hyperloops, or holograms, it doesn’t mean they will become part of our daily lives.

I think it will be really interesting to see what technologies we take up in the future.

AW: Your protagonist, Quinn Buyers, is a scientific genius but the journey she’s taken on ends up primarily being one of the heart and not of the head. How do the physical circumstances of her story facilitate her self-discovery?

SL: The protagonist has a near-death experience, then she’s kept in isolation, on an atoll or containment island, for almost three 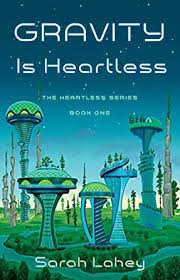 months, while arguing factions decide what to do with her. During this time a sandstorm hits and she’s further isolated inside her shipping-container-home for almost two weeks. To maintain her sanity, she scrawls every mathematical formula she knows over the walls and ceiling of the shipping container.

This is her epiphany moment when she realizes she knows a lot about science and math. She knows every element on the periodic table, and the laws of thermodynamics by heart, but she doesn’t know anything about the world, not really. During the storm she empties out a lot of shit, then she emerges lighter, freer. So, the isolation and change of environment, facilitate her emotional growth. This is the beginning of her journey of self-discovery, which continues through the novel and into book 2, Nostalgia Is Heartless.

AH: In your novel, prejudice is no longer centered on things like skin color and sexual orientation. Instead, it is directed against humans who have merged with AI and robotic elements to create transhumans. Do you think prejudice is an inevitable feature of society or is it something we can evolve beyond?

SL: I don’t believe racism and prejudice are a fundamental part of who we are, or that they are part of our DNA. Humans are social, caring, and cooperative creatures, but we’re also fearful of change; new and unfamiliar things can make us reactive and anxious. Prehistorically, shunning the unfamiliar, and trusting those who looked and behaved like us, would have kept us safe.

But we’ve progressed as a species, and rightly adopted more liberal and trusting views, which have empowered us to work together and survive as a species.

We must encourage expansive and connective behavior between diverse cultures, and all parts of society. Everyone and everything on this planet deserves compassion and respect, and this must be continually reinforced by our educators, leaders, and politicians because it is mutually beneficial to our lives, our existence, and our wellbeing. We are essentially one mass of humanity, and it is imperative that we look after each other.

AH: How did you arrive at the technologies you present in Gravity Is Heartless? How many of them are things you’d love to see created? How many do you fear?

SL: There are so many future ideas that I love, like the luggagebot – essentially a suitcase that follows you around, and developments in 3D printing that allow people to print their own clothes (and just about anything else) if they choose. There are also some interesting sustainable design ideas, like new ranges of eco-textiles, such as piña cloth—made from pineapple leaves. And graphene filters that will filter seawater, making it suitable for drinking, so we’ll never run out of drinking water.

The older I get the more left-wing socialist I become, so I’m fond of ideas like sourcing energy and water will become the individual’s responsibility, and there will be a multitude of innovative and easy ways to do this, thus cutting out corporations. People of the future have also harnessed technological advancements in agriculture and are now growing most of their own food.

But I’m also really concerned about the effect new technologies have on humanity and the way we live. The definition of technology is the application of scientific knowledge for a practical purpose, and on the surface, this sounds like a fine and reasonable explanation. But what is a ‘practical purpose’ and how does it fit into a capitalist society with commercial sensibilities and opportunities for exploitation?

We should always be asking, at what cost? What are the moral and ethical concerns that come with technological developments?

AW: Is severe climate change imminent or is there still time to make changes that will yield a different future than the one in your novel?

SL: Severe climate change is imminent, and I fear it will be much worse than we expect. The Thwaites Glacier in Antarctica has begun to melt, and this is a real concern. The collapse of this glacier alone will raise sea levels by well over half a meter.

But I’m an optimist, and a strong proponent of James Lovelock’s Gia hypothesis, which was developed in the 1970s. This is the notion that the whole planet—all the living systems—work as one united unit, keeping everything in a state of dynamic equilibrium. The planet works as a balanced feedback system, which regulates and controls the environment (similar to any living organism, animal, or plant). This feedback system is responsible for maintaining favorable life conditions on Earth, and it has the ability to correct minor disturbances or irregularities.

Right now, the pendulum is out of kilter, but it’s never too late, we need to take action today. We’ll need a united ecological mindset to preserve our future way of life. I think ecology is a spiritual necessity, and spiritual experiences are an important fundamental human need.

AW: You hold bachelor’s degrees in interior design, communication, and visual culture yet your novel is largely centered on science and technology. Did your interests shift, or have you found your original areas of study enter your writing in other ways?

SL: My creative life and output pull together all my interests. I studied and now teach art, architecture, and design, but these subjects are not strictly humanitarian. All of these fields embraced science, communication, and technology, with some amazing results. The notion of art is shifting from the passive experience of looking, to something that engages the user, take art installations for example.

So, I guess my love of science and technology has merged with my love of art and design.  Digital art, Augmented Reality (AU) and Virtual Reality (VR), are used all the time by architects, artists and designers. Computer-aided design (CAD) allows us to create buildings that look like they belong in a sci-fi film set.

Sarah Lahey is a designer, educator, and writer. She holds bachelor’s degrees in interior design, 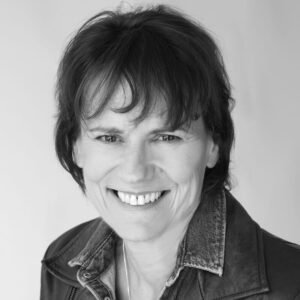 communication, and visual culture, and works as a senior lecturer teaching classes on design, technology, sustainability and creative thinking. She has three children and lives on the Northern Beaches in Sydney, Australia.