Augustine is an aging astronomer near the end of his career who lives and works on an observatory in the Arctic circle when rumors of war begin to spread. His research facility is evacuated, but Augie refuses to leave, and soon all connection with the outside world is lost. Meanwhile, returning from a Jupiter mission, astronaut Sullivan and her team can no longer connect with planet Earth. The world has gone silent.

Chilling in its premise, the narrative focuses on the plight of the characters who now face a question for the ages: What matters at the end of the world? With elegant prose Lily Brooks-Dalton explores connection and isolation, regret and hope, angst and acceptance. Her beautifully drawn characters pull the narrative forward, and she captures their emotions with depth, grace, and truth. This one is a favorite!

It’s a pleasure to welcome Lily Brooks-Dalton to BCB today.

Tabitha Lord: It feels like the seed for this story may have formed around a question or contemplation. Something like, what is the meaning of our existence in the vast expanse of the cosmos? Or, what really matters when the life we know is stripped away? Can you talk about the central themes you were exploring with this novel?

Lily Brooks-Dalton: Absolutely, you’ve beautifully articulated some of those questions I started with. In addition, I wanted to focus on the interplay and overlap of connection and isolation. To me, those extremes belong together. But when I began thinking about these enormous, apocalyptic events and their implications for our species, scope became very important to how I was approaching the story as well. The isolation of an individual is a moving, heartbreaking thing, but what about the isolation of our species? Our planet? It seemed fitting to widen the gaze and let some really big ideas into a story that is primarily about a few individuals. The thing I kept coming back to was always: what matters? What is left when you take everything else away?

TL: Your characters are so beautifully drawn, and you capture the evolution of their healing with artful subtlety. Both Augie and Sully faced similar choices in their lives. They knew they had a calling, an urge to explore, and an opportunity to do the thing they most wanted in the world, but the sacrifice was almost unbearable. As a mother, I felt particularly connected to Sully because of this. Rather than judge her for her decisions, I empathized with her, and I attribute this to your skill at creating layered, authentic characters. How well formed was Sully when you began writing her, and what did she reveal of herself as you told her story?

LB: Thank you, it’s so good to hear that the characters resonated for you. Sully was just a shadow when I started writing about her. Augustine, on the other hand, walked into my head much more fully formed. But with Sully, I learned about her as the rough draft grew, and it was an exciting moment when her narrative finally overtook the Augustine storyline as the more developed of the two… then it was time to play catch up with the other half of the book. I think in many ways she is more nuanced because of this gradual uncovering—with Augustine, it was easier to fall back on more predictable reactions based on what I already knew about him instead of opening up to some unexpected possibilities.

TL: Here, near the end of his life and near the end of the world, Augie is offered a second chance. Or rather, he creates one for himself. Where did the inspiration for Iris come from?

LB: As the beginnings of this story were clicking into place, I didn’t really empathize with Augustine as a character until I likened him to my grandfather, whom I dedicated the book to. My grandfather was an active alcoholic for the first half of his life, and in recovery for the latter half. That midlife about-face, of looking back on his wrongs and making amends for them, of becoming a different sort of person—that is what I wanted for Augie as a character. I wanted to give him the hard truths of a life misspent, tempered with the hope that there is always a chance to do better, no matter how late in the game it is. Bringing the love that I had for my grandfather to an equally flawed character was what made him feel real and lovable and forgivable. And so I think in many ways Iris is a granddaughter figure. In addition to my personal affection for Augustine, it seemed apt to pair someone so young and faultless with someone who carries the incredible weight of so many bad choices.

TL: It is a powerfully satisfying moment when Sully and Augie find each other over the airwaves. Even though the reader understands who they are to each other, you choose not to let them know. Can you talk about this decision?

LB: Great question! In the first draft I think they did figure it out—maybe not both of them, but I think Augustine at least knew. My agent questioned that, and as soon as she did I realized that it was totally unnecessary. It’s not important that they know; it’s important that they begin to make different choices. That they find their own paths to redemption. In the end, they don’t need each other to do that, but I loved the idea of this bigger-than-them moment in which they do finally have this one chance to intersect, and yet the mystery remains. In general, I love books that give readers something extra, something that the characters don’t get to know.

TL: The story leaves us with an unanswered question – what happened to Earth’s civilization? In the end, it doesn’t really matter. The reader’s experience is one of completion. But I wonder, do you imagine what Sully and Harper will find once they land, or is their story finished in your mind?

LB: For me, it’s finished—at least for now. I’ve certainly thought about it, and tried to envision what a sequel might look like (that was the question surrounding movie rights, of course: “so, is there a sequel?”), but I’m not sure I even want to know what happens next.

TL: The science in Good Morning, Midnight, although futuristic, is plausible. Likewise, your descriptions of the Arctic outposts, the tundra, the flora and fauna, the endless days and endless nights, all ring clear and true. How much research did you have to do to tell this story?

LB: Quite a bit, although it seems like cheating to call something that I enjoyed so much research. I did my best to make it as plausible as I could, and that process included reading other novels, nonfiction narratives, memoirs, but also watching films and looking at a lot of photographs of those places. I think in the end the visual research was just as important as the reading I did.

TL: Do the vocations and passions of your characters reflect any of your own interests?

LB: Oh for sure. That is the beauty of fiction—you get to think, you know what, I’m so curious about astronomy, why not make this character an astronomer so I can learn more and call it research. It’s got to be one of the coolest things about writing novels. I won’t ever get to be an astronaut in this lifetime… but I can invent some astronauts and pretend for a while. It’s almost as good.

TL: You’ve previously written a memoir titled Motorcycles I’ve Loved. How did the experience of writing fiction differ from non-fiction? Was one more satisfying than the other?

LB: Well—satisfying is an interesting word. Writing memoir felt more urgent, more necessary, and more propellant, while writing fiction feels more fun, more consuming, and more fascinating. Memoir is a difficult genre, for me anyway—there is an emotional tax required to write about oneself. Fiction has its own difficulties, but in the end I am not beholden to any truth but the one I create, and I love that freedom.

TL: Is there another writing project on the horizon?

LB: Yes, I’m working on another novel right now. It’s early days yet, but I’m excited to incorporate some of the research I did for this first novel that didn’t really find a home in that story… in particular, I learned a lot of wonderful things about cosmology, and so I’m keen to fold some history-of-the-universe type structures into what I’m working on now.

TL: Thank you so much, Lily. My book club will be reading this next! 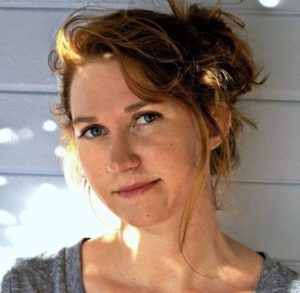 LILY BROOKS-DALTON was born and raised in southern Vermont. Her memoir, Motorcycles I’ve Loved, was a finalist for the Oregon Book Award and her first novel, Good Morning, Midnight, was recently released in August 2016. She currently lives nowhere and everywhere, roaming North America while working on her third book.