Arriving on her sister Rachel’s doorstep for a routine visit, Nora knows something is wrong. When she enters the house, the worst has happened – her beloved sister has been murdered. Unable to return to her normal life, and haunted by another violent crime in Rachel’s past, Nora begins her own investigation.

Carve out several uninterrupted hours to read Flynn Berry’s debut novel Under the Harrow, because once you open this book, you won’t be able to put it down. With subtle detail and clear prose, Berry explores the complexity of the sisters’ relationship and the trauma of Nora’s loss, while simultaneously crafting a tight, edgy thriller.

Tabitha Lord: I’m so pleased to chat with Flynn Berry today on BCB. Thanks for stopping by, Flynn! First, let me say that I read this book in one sitting. I ignored my husband and children for several hours and kept moving from room to room in order to finish! Also, I have a very bad book habit of reading the end prematurely when a story is really suspenseful. It took a lot of self-talk not to read the ending of Under the Harrow. Can you tell us a little bit about the art and craft of writing suspense?

Flynn Berry: Thank you so much! I’m the same way—I remember trying to read The Silent Wife while driving.

The thing that helped me write suspense was not knowing what would happen next. I wrote the book scene by scene, and tried to stay really close to Nora. It could be daunting not knowing where I was going next, but I loved watching Nora’s inquiry take shape.

TL: Did you ever keep yourself up at night after writing a particular scene?

FB: I kept myself up at night a lot while writing this book. I did a lot of research, and it completely got under my skin. The fear in the book was very genuine. It’s something I’ve managed, to a greater or lesser degree, all my life, the way I imagine a lot of women do. There’s an aqueduct trail near the house where I grew up, like the one in the book, and a few times I’ve been alone on it, and seen a man coming towards me, and something about his posture or expression gives me the sense that I’m in danger. I wrote this book because of that fear, and because it makes me angry.

TL: The sense of place in the novel is vivid and well drawn. From Rachel’s house in the country, to the seashore of Cornwall where the sisters vacation, to Nora’s own flat in London, I was able to picture Nora’s surroundings and travel with her as she tried to unravel the mystery of her sister’s murder. When and why did you choose to set your novel in the UK?

FB: I knew right away that Nora was English. And the atmosphere of a small town outside Oxford seemed to work with the story. I also loved building a fictional town, and deciding on its shops and pubs and landscape.

TL: The relationship between Nora and her sister is more complicated than the reader originally suspects. Did you plan this, or did the characters evolve as you told their stories?

FB: I felt familiar with the two women right away—I could picture them and hear how they spoke and knew their interests and habits. But I didn’t plot out their backstory in the beginning, and then slowly their secrets and betrayals came to the surface.

TL: The sisters are very close, but quite different people. Is there more Flynn in Nora or in Rachel?

FB: I identify more with Nora, who’s an aspiring writer and assistant to a landscaper, and the more observant of the two. But Rachel, who is self-sufficient, resourceful, and tough, is based on some of my favorite women.

TL: I’m always interested in another writer’s process. Can you talk a little about your writing habits?

FB: Me too­–I love reading about where and when someone writes. I try to write for two or three hours a day (though with work and other tasks that doesn’t always happen). I listen to the same songs on repeat (for this book, “The Swimmer” by Max Richter and “Orphée Suite: IV” by Paul Barnes, both slow, sweeping piano pieces).

I also read all the time, and that usually makes me want to write. I’m still completely bewildered by reading, and how strong a hallucination it can create.

TL: You went to Brown University! I’m a Rhode Islander! What was your favorite hangout in the great city of Providence?

FB: My favorite hangouts in Providence are all to do with food. My first fancy dinner was at Al Forno (I had pumpkin pasta and will NEVER FORGET IT). Then there’s Bagel Gourmet Ole, where you can, brilliantly, get both bagels and nachos. I also have a very fond memory of going to New Rivers on Valentine’s Day with my two best friends and taking tequila shots and generally bringing the atmosphere down.

TL: Are you currently working on something new or are you taking a moment to enjoy the post release bliss and mayhem?

FB: I’m working on something new. I usually feel vaguely uneasy if I don’t have a project on the go. The new book is also a psychological thriller, though it’s less about survivor’s guilt, and more about anger and revenge, which, so far, has been fun to write about. 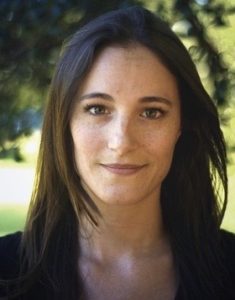 TL: Congratulations on a page-turning debut!

FB: Thank you so much. Let’s go to Al Forno now!

Flynn Berry is a graduate of the Michener Center for Writers, and has been awarded a Yaddo residency. Under the Harrow is her first novel. You can follow Flynn on Twitter @FlynnBerry or visit her website at www.FlynnBerry.com.