I’ve been itching to read a new fantasy series, so when Melissa Caruso and I were on a panel together at a science fiction and fantasy conference, I reached out and asked if I could feature her on BCB. She sent me a copy of The Obsidian Tower for review and I eagerly dove in. This book did not disappoint! The world-building is superb, the intriguing plot action kept me turning the pages, and the characters were complex, interesting, and well-developed. I quickly became invested in their struggles and eagerly followed them along on their adventures. It’s my pleasure to chat with Melissa Caruso today on BCB!

Tabitha Lord: You’ve set the The Obsidian Tower in Eruvia, a world you introduced in the Swords and Fire trilogy. Can you give us a quick sketch of the kinds of magic your characters wield, and some of the creatures we might encounter there? 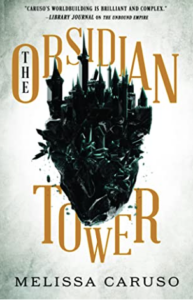 Melissa Caruso: Sure! There are four kinds of mages in Eruvia: alchemists create potions and elixirs, artificers design complex enchantments using runes and wirework, warlocks can unleash incredibly destructive storms or balefire, and vivomancers wield the power of life itself. Vivomancy is the dominant magic in Vaskandar, the country where The Obsidian Tower is set, where immortal Witch Lords hold power over all plant and animal life in their domains. Powerful vivomancers can even reshape life to create chimeras (like one character’s giant riding weasel!). It was a lot of fun to get to dig much more deeply into vivomancy and Vaskandar’s unique perspective on it in The Obsidian Tower, since Swords & Fire takes place in the Serene Empire, where vivomancy is less common and the attitude toward magic is very different.

TL: You chose to give your protagonist, Ryx, broken magic. Can you talk about this choice, and how it helped shape and drive her character development and the plot itself?

MC: Ryx’s uncontrollable magic kills pretty much everything she touches, which creates this paradox where on the one hand that would be incredibly powerful if she wanted to be an assassin or something, but it’s worse than useless for everything she actually wants to do. Her power is a constant obstacle for her—and as you see fairly early in the book, it means that the tiniest slip can have devastating consequences.

Her broken magic also makes her an outsider, with no place in a society and a family where she’s supposed to be using life magic to sustain the land. On top of that, her power is very socially isolating. (Mind you, I had no idea when I was writing this book that my character’s experience of having to stay out of arm’s reach of everyone all the time would wind up resonating very differently now that social distancing has become a part of our lives!) So a lot of what she yearns for and what she fears has been shaped by having this lethal touch, but at the same time she’s pretty pragmatic about it; she’s developed workarounds, and she’s determined to do her duty. I had fun writing a character who has this super dramatic power that triggers all sorts of plot problems but has a more practical personality and is just trying to do her job.

TL: The politics of Eruvia are complicated and intriguing. How much of this did you think through before diving into the story?

MC: I had the advantage of writing an entire trilogy in the same world before starting The Obsidian Tower, so the political structures of the two major nations and the strained relationship between them already had a fully fleshed out history. The particular political situation for this book and its major players were all new, however, and while I have pages of notes and outlines laying out the political plot, it nonetheless underwent a lot of changes during edits! What everyone was clashing over remained the same, but I did a lot of tweaking and re-tweaking of who exactly was involved, what their personal goals were, and how the political conflict played out. In the end I found it was really helpful to be very clear in my own mind about what exactly everyone wanted and what they were willing to do to get it, and also to raise the stakes of the political plot whenever I could, and to make them as personal as possible!

TL: Our readers enjoy hearing a little about an author’s process. Having been on a panel with you, I was intrigued by your approach to edits with regard to pacing your stories. Can you talk a little about this?

MC: I can talk a LOT about editing and pacing! But probably my favorite tool for editing for pacing is something I call a stakes map. First I list out each scene in the book in order, with just a short description of a few words for each scene. Then I color code the scenes by how much my character has at stake in that scene—for instance, I might do green for low stakes, blue for high emotional stakes, and red for action scenes with high physical stakes. If I see a whole bunch of green scenes in a row, then I know that section is too slow and either needs some twist to bump up the stakes, or it needs cuts! Or if I see whole bunch of red scenes in a row, then I might need to let my readers take a breather and let the emotional impact of all that action sink in between fights.

Another thing I do is to make little bullet lists of the key turning points for major plotlines and character and relationship arcs. I’ll pull those key moments for a particular arc out into a list and take a look to make sure that I haven’t got a stretch where nothing is really changing in that relationship or plotline. It’s very easy to wind up treading water and having a bunch of scenes that don’t really advance a particular plot or relationship when you’ve got lots of other stuff going on in the book, but readers will still notice that nothing is progressing in those scenes! So pulling them out to look at independently of all the noise of the rest of the book is really helpful for me.

TL: Do you have a favorite character in The Obsidian Tower? If so, why? I fell pretty hard for Severin!

MC: I have so much trouble picking singular favorites! I love Ryx of course, but main characters are kind of cheating. Some of my favorite side characters are Ashe, Severin, and Whisper, for very different reasons! Ashe is very, uh…focused, and she has a lot of good lines and is just easy and fun to write. Severin is the opposite—he’s complicated and layered, and he’s often got multiple motivations in play that he’s desperately trying to balance, and it’s fun trying to hint at those layers without ever seeing directly inside his head. Whisper is almost like a combination of the two.

TL: Thank you so much, Melissa! I really enjoyed the book, and I can’t wait for the next one in the series.

Melissa Caruso is the author of the Swords and Fire trilogy, an adult fantasy series of intrigue and magic, as well as the forthcoming Rooks and Ruin trilogy (starting with THE OBSIDIAN TOWER, coming in June 2020), both from Orbit Books. Melissa’s debut novel, THE TETHERED MAGE (October 2017), was shortlisted for a Gemmell Morningstar Award. Melissa is a fantasy writer, tea drinker, larper, mom, and all-around geek. Despite being born on the summer solstice and going to school in an old mansion with a secret door, she has yet to develop any known superpowers. She lives in Massachusetts with her video game designer husband and two superlative daughters, and has been known to do battle in ballgowns.