When Jenna, a twenty-something native Mid-westerner, is offered a job working for Vincent Hull, a prominent businessman in New York City, she jumps in feet first with no idea what she’s getting into. But is it naivete, love, kindness, or panic that places her beneath his dead body or a mixture of all four?

Jenna is an entirely loveable character even as she sheds her naivete and innocence for savvy and sophistication, and Jenna Takes the Fall is a unique delight! We are so happy to chat with the author about her fabulous debut novel!

Amy Wilhelm: I loved your protagonist Jenna. How did you put together the characteristics that make Jenna Jenna – both in the beginning and as she evolves throughout the story?

A.R. Taylor: I endured two fascinating stints in NYC, twenty years apart. The flora and fauna of the place struck me powerfully. How in the world did young women like Jenna ever cope? The expense, the noise, the careerism, the relentless forward movement, on the streets and everywhere else. And the dirt, literal and figurative. I was part of the magic and mystery of that big old male world, but Jenna herself is a composite, a bit like one of my roommates, a bit like the young women I worked with, most like myself, who grew up in the Midwest.

AW: When I first started doing interviews, I used to ask how authors “came up with the idea.” I stopped doing that years ago because the question seemed so cliché yet I absolutely have to know in the case of Jenna Takes the Fall!

ART: There’s a long, sad history of young women caught up in scandals that involve much older men. Think Monica Lewinsky, think Megyn Kelly, the list just goes on and on. And then there are the men who sometimes die on top of them. Often the story around each death is murky because no one wants to tell the truth, and no doubt people are paid off, how many we have no idea. So the book involves a “what if” proposition.

What if the woman found underneath Vincent Hull is not actually the culprit at all, but a decoy?

AW: What made you decide to put the ending at the beginning so to speak?

ART: Putting the ending at the beginning was a major decision, and I kept changing my mind about it. Finally though, I decided that if we just see Jenna at work in her office being completely out of her depth, the book announces itself as a “girl who comes to New York and makes good” kind of story. I didn’t really want to signal that. 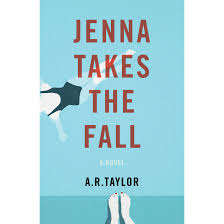 AW: Vincent Hull is definitely kind of a jerk. What does it say about Jenna that she focuses on his redeeming qualities? Why does she get involved with him in the first place? It almost seems like it is something that “just happens.”

ART: You say Vincent Hull is “kind of a jerk.” Way worse, I would say, but also wonderful in the sweep of his ambitions. He lives big, he wants big, and he’s capable of much love and generosity. He’s also what I would call a “magnificent asshole,” of which there are many. They can do what they want, pretty much, and they have a coterie of people who make the world safe for them to do it. At the beginning of the book, Jenna is such a person. But she changes.

AW: Jenna has a strong interest in art. Does that reflect your own interest?

ART: I was lucky enough to have both a mother and a surrogate mother who loved art, and they took me to museums and art galleries in Ohio (where I grew up) and New York. They imbued me with great reverence for painters and sculptors and every other person who tries to create, whether for a small public or a wider one. For those two women, the struggle was always worth it, even for the forgotten or misunderstood.

AW: Did Jenna’s character arc change as you wrote or did you know where she would end up when you began to tell her story?

ART: I did not know where she would end up, but I knew what kind of struggle she would have and what its arc would be. That actually was quite a problem, as in “How does it end for her?”

I put off writing this book for a long time because I couldn’t quite see where it was going.  Finally, I just plunged ahead and hoped that at some point, it would come to me.

AW: At the start of the Covid-19 pandemic many writers thought there would be an opportunity to get a lot more writing done. However, most of them have found (myself included) that they’ve written less than they expected to, which many attribute to both stress and the change of routine. What has your experience been like?

ART: Fortunately, I’ve had a number of hard deadlines imposed by other people, so that has kept me going, even under stress. I’m thankful for that. But in the end, the whole situation is horrible, disgusting, tragic in every way. I just cry when I watch the news. Sadly, almost every culture, every epoch has had to deal with plagues, and there’s some rich literature about trying times like our own. I haven’t turned to somebody like Defoe or Camus because I can’t bear to read about all that now. Mostly I think about life as “soldiering on.” Talking and communing with family and friends, for me anyway, seems the only path forward.