Bob Boland notes that in Cambridge, Massachusetts everyone loves you back. Of course, he’s saying it sarcastically. They love you if you fall into line with how they want you to be, and capitulation isn’t Bob’s forte. In Everyone Loves You Back he struggles with his age, his neighbors, management, love and other sundry upheavals, all the while refusing to march in some predetermined rhythm.

Bob, a beautifully flawed self-assessor, is easy to love. His honest, biting observations of the changes being made in his neighborhood and at the radio station he works at will have you laughing out loud. This is one of those “read in one sitting” books that provides both food for thought and great entertainment, which is just the type of book BCB loves to recommend!

Ms. Cronin was kind enough to join BCB to discuss Everyone Loves You Back.

Amy M. Hawes: I love your opening lines: “Bob Boland is surrounded. Yuppies everywhere.” It as though he is on a shrinking island in the sea of Cambridge – this image encapsulates an essential narrative of Everyone Loves You Back. But as we get to know Bob better, it seems that even though he doesn’t fit the paradigm of the new Cambridge, he didn’t necessarily fit in the old one either. Would you agree?

AH: We discover plenty of “us against them” themes in your novel. The most prominent example is between those who want to save a beautiful old tree and those who want to tear it down. And as I’ve mentioned, we witness the same friction between the old Cambridge residents and the new. Is change, and dealing with his resistance to it, the essence of Bob’s story? 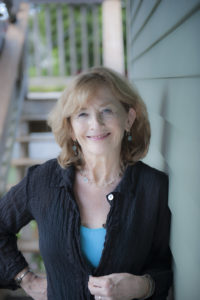 LC: Yes, Bob is watching with horror as his world is totally transformed. And some of his resistance is definitely holding him back. But I’d argue that a lot his resistance is actually heroic. Change itself is neutral; it’s neither bad nor good. We’re told these days that we must embrace change, that change is equal to progress. But it totally depends on who’s behind the change, who has the power, whose interests are being served. Some changes are really bad!

AH: What I love most about your novel is that even though the plotlines and conflicts move the story forward in an interesting way, the real backbone of the story is the opportunity to see life from a very specific point of view–Bob’s. I enjoyed walking in his shoes, as it were. Did you decide where his path would lead or did the character lead you?

LC: Both! I definitely wanted Bob to get involved with his upper crust neighbors, to get to know these people he had been resenting his whole life. I wanted to challenge him out of his comfort zone, in love and at work. But the more I wrote Bob, the more he emerged as a totally separate character, whom I really liked and admired. And once that happened, it was almost as though the story itself was leading the way, like it had its own logic and physical laws. And I agree, I love being in a sustained, specific point of view. For me, it’s one of the great pleasures of reading.

AH: You showcase your knowledge of jazz through Bob’s job as a host of a radio jazz show. Has jazz music always been a love of yours, or did you research it for this novel?

LC: Again both! I always loved jazz, even hosted a jazz radio show when I was in college. But I was never really an expert. I was surrounded by experts and I learned about jazz by osmosis. I did a tiny bit of research for the book, but most of it came from a lifetime in radio, working with jazz hosts, and getting lots of free tickets to jazz concerts.

AH: The male characters in Everyone Loves You Back are strikingly genuine, especially Bob and his co-host Riff. You seem to understand them, more than most women might be able to. Where and how did you gain this ability?

LC: Thank you! I grew up with three brothers and when I was writing Everyone Loves You Back, I was actually working at Car Talk, surrounded by men, and putting out a show that had a real male point of view. And Bob is a lot like me, so I could tap into my own sensibility when I wrote him. But it was at times a challenge for me to write as a man. I ran every chapter by my writing group and always paid attention when the men said I got Bob wrong. For example, I had a scene where Bob comments on something his new boss, Anthony, is wearing. The men in my group laughed and said men don’t notice what other men are wearing. They are wondering who could take who in a fist fight! So I changed it.

AH: Leonie, a Harvard dance professor, and Irene, a co-worker, become potential love interests for Bob. What was the impetus for creating such contrasting characters and what do you think his interaction with them tells us about your main character?

LC: When I started the book, I was much more concerned with issues of gentrification and class, of Bob not fitting in. But suddenly the romances bloomed and took the book in a different direction. Irene emerged organically from the world of radio, which Bob and I knew well, and I created Leonie, in order to challenge him. I thought, what if he falls for one of his enemies? What if he finds out he’s been wrong? His interaction with Irene and Leonie is sometimes bumbling, often indecisive, but I hope mostly kind.

AH: It’s a pleasure when a book can make me laugh out loud, and yours definitely did. Was it fun for you to lace your book with large doses of wit and sarcasm?

LC: Again, thank you. And yes, it was fun. I love to laugh and love to make others laugh. And I had a lifetime of growing up in Cambridge, trying to find love, and working in radio to mine. I have been storing up my observations all these years. And I guess sarcasm is my form of criticism, my way of questioning how things are done, of speaking truth to power.

AH: In the context of your novel you mention that: “[l]ot’s of radio people develop these vocal tics: weird pronunciations, over-long pauses, sliding words together, enunciating a little too forcefully . . .” You worked in radio, is this insight derived from experience? If so, what’s the most unusual tic you’ve witnessed?

LC: I don’t know if this quite qualifies as a “tic” but it’s certainly the most extreme case I came across. I worked with this seasoned announcer who had a beautiful, deep British accent. One of my coworkers somehow got a hold of a tape from his early days at the station. Turns out, he was an American! He had morphed into a British elder statesman on the job!

AH: On a similar note, what else did you learn from your time in talk radio? Did any aspects of your characters have their origin in callers to your show, Car Talk?

LC: Things I learned over the years working in talk radio: You’re only as good as your last show. Everything can be a show topic, so you are never off work. You don’t need to read the whole book. You don’t need to have the answers, just the questions. Some celebrities you think will be nice are awful. And vice versa. Things never sound as bad in a car as they do in the studio. Things never sound as good in a car as they do in the studio. Guests will storm out of a live radio show and leave you hanging. Never book a string quartet.

The callers from Car Talk didn’t really end up in the book, but what I hope did, were echoes of the guys’ sense of humor and love for one another.

Louie Cronin is a graduate of the writing program at Boston University. Her stories and essays have been published in The Princeton Arts Review, The Boston Sunday Globe Magazine, and Newsday, and have been finalists for Glimmer Train and New Millennium Writings contests. She has won fellowships from the Virginia Center for the Creative Arts, Ragdale, The Vermont Studio Center, and The Writers’ Room of Boston. She has worked for years in public radio, at Car Talk, The Connection, and now PRI’s The World.