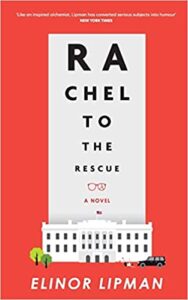 Rachel to the Rescue was published by Lightning Books out of the UK because American publishers thought their readers might have Trump fatigue. In reality, the story is much less about Trump and much more about its heroine Rachel Klien and her ability to deal with her ever-changing circumstances.

Those circumstances were set in motion when she inadvertently hit “send all” on an email criticizing Donald Trump and therefore lost her job of taping up his torn documents so that they could be filed. As she’s walking away from the building, she’s hit by a car that’s driven by a woman who is a special friend of the President. From there on out things get a bit complicated as a lawyer, a lover, well-meaning friends and parents, and an intrepid writer enter the mix. I truly loved Rachel’s story and Lipman’s delightful telling of it in this fun easy read! I’m so happy to share my interview with Elinor here.

Amy Wilhelm: American publishers didn’t want to publish Rachel to the Rescue because its premise was based on Trump’s habit of ripping up important papers that are supposed to be preserved. Did you consider using different names to disguise, albeit thinly, the book’s relationship to reality?

Elinor Lipman:  Never considered anything but reality.  It wasn’t anyone objecting to the job Rachel had, but worry about the bigger picture, how Trump is satirized. All the turn-downs mentioned the timing—not how it would hit people now, but when the book supposedly would come out in a year when they feared no one would feel like laughing at Trump. Of course, I say Ha to that.  England disagreed and brought it out in 3 weeks.

AW: Lightning Books out of the UK ended up publishing the title. Why do you think it was a good fit there but not in the US?

EL The editor’s decision to bring it out immediately (“like billy-o” he wrote) was pretty much his alone, so there wasn’t a committee trying to guess what the mood of the country would be in a year.  He wasn’t worried about “Trump fatigue,” especially before the election, and certainly not now.  I like to say it was a good fit for the country that developed the Trump baby blimp.

The day I heard about one turn-down that really disappointed me coincided with the release of Mary Trump’s memoir and sold 980,000 copies that first day.

AW: Your protagonist, Rachel Klein, is fired from her job as official taper-together of Trump’s torn up documents when she inadvertently hits the send all button on a derogatory email about the President. The same day,  [spoiler alert!] a woman who is having an affair with Trump hits her with her car. Even though the events that happen next are ultimately tied to Trump in one way or another, this story is distinctly about Rachel and not the President. Did you find that as you were writing her story the premise became less important than getting to know your protagonist, a thoroughly likable and authentic character who has us rooting for her happiness from the very beginning?

EL:  I was looking for a balance in the whole book:  equal parts Rachel’s private life and her work life.  Since the latter involved working for a writer keen on exposing Trump—the very reason he hired Rachel was that she’d been fired by the Trump White House and her grudge-keeping might benefit him–I was duty-bound to keep Trump and family alive and well. They do get more ridicule-worthy as the story goes forward while Rachel’s life enriches with roommates and a boyfriend.

AW: As a follow-up, what would you say Rachel to the Rescue is really about?

EL:  I’d say it’s really about Rachel finding herself and the happiness that had eluded her.

AW: You wrote the novel prior to Trump’s election loss. Do you think his post-election claims of widespread fraud put the context of your story in a different light than it may have had before the election?

EL: The Trump of Rachel to the Rescue is dim, without one redeeming characteristic. It was great fun to put words in his mouth.   Now I see only consistency between the fictional Trump and the 2020 Trump in defeat.

I did predict his slinking to Mar-A-Lago when it was all over. We’ll see about the divorce I gave POTUS and FLOTUS…

AW: Despite the references to characters in Trump’s world – both real and imaginary, Rachel to the Rescue is full of light-heartedness and fun. Whether it is her relationship with her overly curious about her career and love-life parents or her roommates who are equally interested in both subjects, there is a “real-life” feeling to this story. When they’re finished with the book, what do you hope your readers will be left with?

EL:  I once heard the award-winning author Robert Stone say that the purpose of a novel is to make the reader feel less lonely.  I want my readers to be buoyed by my books, to laugh, to be satisfied, to feel better having read them.  My favorite compliment is when someone tells me that my books get them through hard times.

AW: What is the best way for Americans to get a copy of Rachel to the Rescue?

EL:  For readers who do e-books, that’s easy—wherever you get your e-books. For the paperback, best way is to call your local bookstore and ask them to order it, because it does have an American distributor.   I’ve even seen it on Target’s website!