Welcome to Book Club Babble Denise.  Let’s start with the story behind what inspired this memoir?

I was inspired to write the memoir because I didn’t want the story of Les Nickelettes to be swept into the dustbin of history. The group did things no one else was doing; we were ahead of our time. My story is a snapshot of a culturally historical time in ‘70s San Francisco that reveals an unprecedented liberation of women’s humor. My female perspective of that era needed to be told and preserved.

In the ‘70s and early ‘80s, you were at the helm of the ground-breaking, taboo-busting, all-women theater troupe, Les Nickelettes, will readers find some of those adventures in Anarchy in High Heels? 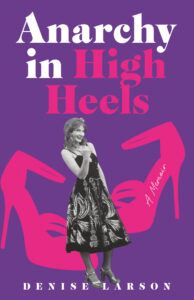 Yes, they will! I’m a die-hard feminist from the Boomer generation with a satirical sense of humor. Some have said a funny feminist is an oxymoron, I want to prove them wrong. I have been steeped in the counterculture of San Francisco for over fifty years. However, I did take a break for about 20 years to become a parent, a mild-mannered pre-school teacher, and then a Head Start Center Director. The Superwoman came before Lois Lane. Now, with Anarchy in High Heels I am resurrecting Superwoman.

What was the most difficult part of writing your memoir?

The most difficult part was how long it took to complete. I combed through personal archives and diaries to create an initial outline of events. Then, a huge amount of time was spent on interviewing, transcribing, and coordinating other participants’ recollections. Researching outside sources took up even more time. Oh, and not to mention, that along the way, I also had to learn how to write a memoir.

How did you choose what to leave out and what not to include?

My first draft was almost twice as long as the finished manuscript. I was emotionally attached to many stories that I had to cut. It came down to crafting an interesting and compelling narrative. I had to let go of some of my favorite stories because they didn’t add anything to the themes I wanted to stress. Fortunately, in this era of advanced technology, I have a blog on my website, where I include these stories under the banner: “Stories Left Out.”

What is the biggest message you want to get across?

Do you think that making meaning out of our stories is a form of therapy?

Memoir, generally, is a genre that evokes a path to self-discovery and/or healing. My book is not a typical memoir. I want to evoke not therapy, but a mind-set shift: “Anarchy in High Heels is not a state of dress; it’s a state of mind.” The most heartfelt reaction I’ve gotten from some readers is; “I wish I had been a Nickelette.” My message is; you still can be.

What has been your biggest learning experience since you started the process?

Writing and publishing a book takes a long time. It took me 30 years. It’s a huge endeavor, and I’m glad I didn’t see it that way in the beginning. Having said that, I have a deeper and more meaningful appreciation of those wild experiences in my life that I write about than I did before. In my reflections, I marvel, did I really do all of those things? I did, and it influenced my entire life, so it was vital to me to complete the process.

What is your goal? The big vision of what you want to achieve by putting your story out into the world?

I know the book speaks to feminists of my era. I hope it can also reach young readers. I feel that feminists, no matter their gender or age, can appreciate the history and importance of a counterculture group that paved the way to a more open acceptance of all artistic and human sexual expression. 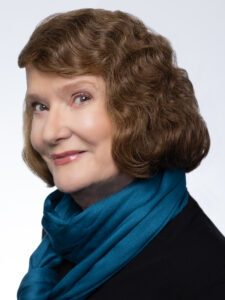 Denise Larson is a native Californian: she went to elementary school in the Los Angeles suburb town of Torrance and high school in the San Joaquin Valley city of Manteca, and finally, after college, she put down roots in San Francisco. With a BA in theater from San Francisco State University, she pinned her dreams on becoming an experimental theater artist in the ’70s counterculture milieu of the Bay Area. Along that path she founded Les Nickelettes. For thirteen years, she helmed the feminist theater company and assumed the role of actress, playwright, producer, stage director, and administrative/artistic director. Then she gave it all up to become a mother and teacher. After a twenty-year career in early childhood education, she retired and took up writing. Denise still lives in San Francisco with her husband and their cat. She has also returned to her first love: theater. She is taking an improv class, and collaborating with other performers to form a new theatre group: Cosmic Elders. The author resides in San Francisco, CA.