Have you ever wondered how writers think up new characters, especially characters of the mythical sort? Read on to learn how fantasy author James Priest develops the weird and wonderful characters who populate his tales…

Every fantasy writer approaches character creation differently, but all fantasy writers share one commonality. We must find inspiration that bestows life, charisma, individuality, and gravitas on nonexistent beings derived entirely from our minds. This characterization must be so powerful it moves readers to care deeply about the wellbeing of these make-believe souls. For me, the story itself provides that inspiration.

In my four-book KIRINS fantasy series, I created hundreds of fictional characters. Most are kirins (a race of tiny, magical, humanoid beings that live all around us in today’s world). Thus, most of my characters are mythical, as one would expect in the fantasy genre. They include magicians, warriors, precocious youths, magical creatures good and bad, and even a host of animals under the kirins’ magical influence. 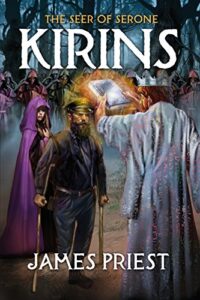 In my creative workflow, rarely do I come up with a character idea and mold the story to advance the character. The story is preeminent, and as it germinates, it tells me what characters will serve it and who they are as individuals. With each revision of the story, with every pass, more character details surface. The circumstances define who they are. Then it is my job to refine them with the details that make them compelling, sympathetic, memorable, funny—in a word, alive.

For example, the first three books of the series called for a character to lead a band of kirins on a far-flung quest against an unknown foe. The story placed the task on the shoulders of an ordinary clan magician—Speckarin—when some of his clan-folk stumbled across the secrets of a great, advancing evil. Circumstances, therefore, made the story’s champion something of a reluctant hero, with wisdom, integrity, and resolve but also nagging doubts and humility. I did not set out to make Speckarin an antihero who rises to the moment, but the story nudged my authorial instincts in that direction.

Visualizing characters’ appearance is also critical to creating memorable characters that come to life. There is a feedback loop between the character’s physical appearance and personality. For example, in my latest KIRINS novel, The Seer of Serone, a mysterious, bald kirin arrives at Speckarin’s door riding a swan, dressed head-to-toe in black, his beard and mustache caked with ice. These physical attributes herald and reflect his glowering and offbeat personality.

Character names are also an integral part of characterization. A figure in a fantasy tale has never actually existed but must have a name. A name is the reader’s gateway toward bonding with the character. I have often been asked how I created the names of my characters. The names came from diverse, almost random sources – the names of our pets, geographical locations, sports figures. Most of them were altered from the original. Brahms became Broms. The former football kicker Faud Reveiz became Fuadru Vez. Some names went unchanged such as Silarude (the surname of our dog’s eye veterinarian) and Grygla (a town in Minnesota). While writing and introducing a new character, I frequently selected a word from the news of the world or anything else that I came across and incorporated it into the manuscript. Tom Nieto became tominyeto, a healing herb with potent medicinal qualities used by kirins for injuries. I even altered the names of some friends from my past. The one common thread – each term I selected somehow fit its subject by sounding exotic, interesting, appealing, or magical. In short, the names that caught my ear had character!

James D. Priest, M.D., majored in English at Carleton College in Northfield, Minnesota. He studied English in the masters program and received a Doctor of Medicine degree at the University of Minnesota. After spending three years in Japan as a physician in the US Army caring for casualties from Vietnam, and four years in an orthopedic residency at Stanford University, he then practiced orthopedics in Minneapolis for twenty-one years. As the author or co-author of approximately thirty medical articles, Dr. Priest received the Minnesota Medicine Outstanding Writing Award.