In What It Seems, best-selling author Emily Bleeker throws the Internet, child abuse, reality TV, shoplifting, hope, and lies into a blender and creates a brilliant psychological thriller that is equal parts disturbing and heart-warming.

Twenty-year-old Tara has lived with her cruel and controlling adoptive mother for the past twelve years. She’s locked in her room, forced to shoplift to provide family income, and isn’t allowed to have any friends. Her life’s one bright spot is watching the escapades of the Feely family on YouTube. When an opportunity arises to become their intern, Tara finds the courage to accept their offer and escape her previous life. Though the family isn’t what they seem, and she’s in constant fear of being exposed, little by little Tara discovers an inner strength hidden within. We’re so happy to talk to Emily about her newest novel, which is sure to be another bestseller!

Amy Wilhelm: In What It Seems, your protagonist Tara is emotionally and physically abused by her adoptive mother. How were you able to find the voice of such a character, and show that both self-doubt and the seed of courage lived within her?

Emily Bleeker: There were several inspirations for this story, but two stand out to me. First, was watching the autobiography of Elizabeth Smart. In that documentary, she talked about how at first, her abductors kept her locked up with chains and how eventually she came to be chained more by her fear, and the physical restraints were not needed anymore. Then, she spoke about how painful it was when people called her inability to escape Stockholm Syndrome when it was control, fear, and abuse rather than sympathy or empathy for her captors.

When I listened to her speak about those kinds of psychological restraints, it made me think of the age-old question to victims of abuse, which is: Why did she stay? I wanted to let the reader get inside the mind of someone who feels stuck in a bad situation. Tara’s life was objectively terrible. But I also tried to give other examples in the story of people staying stuck in conditions that were less abusive but still toxic, hoping that understanding of the trap of “staying” is so deeply ingrained in all of us in various ways.

So, I looked at stories of those who escaped domestic abuse or were survivors of child abuse or even those who left abusive, cult-like situations.

All showed the same signs of wanting to leave, knowing they needed to but not knowing HOW to get past the invisible chains that had been put in place.

AW: As punishment, Tara is sometimes locked in her room. Instead of being frightened, the twenty-year-old finds it a comfort since she will be safe from Mother for the duration of her punishment. What do we learn from Tara’s ability to find small places of comfort even amidst such abuse?

EB: I think the human spirit is one of natural resilience and adaptability. It reminds me of when I was on a walk with my kids, and we stopped to cross a busy street and right by the crosswalk was a chain-link fence with a tree against it. The tree had started to grow around the fence becoming one and the same in certain sections.

My daughter asked, “How did they put that fence in that tree?” and I explained that the tree needed to grow, so it just grew around the fence. That is how I see Tara and others in such limiting situations. She adapted so she could keep growing.

AW: Why do you think Tara has accepted her situation for so long? What makes her willing to leave?

EB: Tara accepted her situation because it was the life she knew. She had lived that way for so long and had been so isolated that she didn’t think she had any other choice until she had what she thought was a warm, loving home to shelter her.

In researching abuse and especially leaving abusive situations, one thing that stuck out for me is the importance of someone who feels trapped in their relationship, having someone on the outside of the situation there to give hope and to encourage their strength. When speaking with the Domestic Violence Hotline, they reiterated that the only person who can leave an abusive situation is the person who is being abused. It has to be their moment of strength and revelation and resolve as long as it is a situation with two adults and not a criminal case.

For Tara, that beacon of hope was the Feely family. It was the thing that made her believe there might be more out there in the world and that she might have more worth than her Mother had lead her to understand.

AW: The Feely family’s YouTube videos are a lifeline for Tara. They give her something to believe in and maybe even hope for one day. After she’s selected to work for the family, she soon discovers the “reality” they present isn’t real at all. It struck me that her optimistic viewpoint benefits her tremendously, even if the “facts” contradict it. How important is imagination in creating a refuge away from an abusive situation?

EB: I think fantasy is both helpful and dangerous in these situations. In a domestic abuse situation, on average, it takes 7-8 attempts at leaving an abusive partner before it becomes a reality. One of the reasons this is the case is that often violence and control escalate when a person attempts to leave an abusive relationship, which can make it the most dangerous and life-threatening time in the process. But I also think there is another side to it. If there are not proper supports outside of the relationship, it is easy to feel like “well, at least with my ex-partner/parent I had a home to live in or food on the table or my children had a mom and a dad in the same house or at least I wasn’t so lonely…etc.”

The fantasy of a life outside of the abuse can get you out, but there needs to be something there on the other side that is real and good and builds a structure of a new life otherwise, going back to the “devil you know” is far more comfortable than feeling like you are failing on your own. Just like when Tara found safety in a locked door even after leaving Mother, she also felt safety in someone else controlling her life.

She slowly had to learn how to make her own choices and save herself rather than hoping that someone else would do it for her. It was a laborious process that she would likely be learning for much of her life.

AW: Without giving away the ending, I wanted to say how impressed I was how the story came full circle in such a believable way. Endings can be tricky. How do you know when you’ve come up with the right one?

EB: Well, the climax of this story used to be the first chapter of the book. I made a choice halfway through the book to move some important information to later in the story.

Usually, I do know how I want a story to end in general when I start to write it, but in almost every story I’ve ever written, the specifics of the ending often change as I go through the drafting and editing process. I come to know my characters so much better, and sometimes that means their choices are different than I predicted they would be when I wrote up the first synopsis and outline of the story.

AW: What’s it like to write psychological thrillers? Obviously, you write about lives no one would want to live. But, is writing the story itself fun?

EB: Absolutely! I love writing the twists and turns of these stories. I love having an “ah ha” moment as I’m writing, and knowing this will make the story even more exciting and poignant for my readers. I love researching and making it as realistic as possible. But, also, something that is VERY important to me is facilitating an authentic and memorable human connection with the reader. I think that reading creates empathy and that by living in someone else’s head for 300 pages, readers can become more understanding of the inner-workings of situations they might not have experienced themselves. Or, there might even be a few who will see the courage of someone who left a situation that reminds them of their own and gain strength from it. Either way, those moments mean more to me than followers, book sales, or reviews. 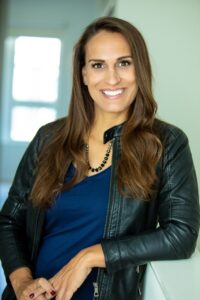 Emily Bleeker is a former educator who discovered her passion for writing after introducing a writer’s workshop to her students. She soon found a whole world of characters and stories living inside of her mind. It took a battle with a rare form of cancer to give her the courage to share that amazing world with others. Emily lives in suburban Chicago with her family. Between writing and being a mom, she attempts to learn guitar, sings along to the radio (loudly), and embraces her newfound addiction to running.