Amelia Montgomery, a talented and notoriously tough attorney, has forged her career with a take-no-prisoners attitude, leaving a long trail of broken relationships in her wake. Her lack of compassion has left her on an island where her success is her only companion. It’s ironic, and shows the complexity of Amelia’s character, when her compassion is what brings her career to a screeching halt. Even though she’s the lead attorney on a sexual harassment case, Amelia isn’t willing to drag the alleged victims through the mud just to paint her defendant in a more flattering light. She’s so unwilling, in fact, she throws a punch at one of the partners of her firm to prove her point.

After walking away with a generous severance package and a non-disclosure agreement, Amelia’s sister convinces her to throw herself a fortieth birthday party. Nobody but her family comes. Nobody except the lawyer who will replace her at the firm. Amelia drowns her embarrassment, anger, and disappointment in shared bottles of wine with said lawyer, who also happens to be very handsome and a good listener. 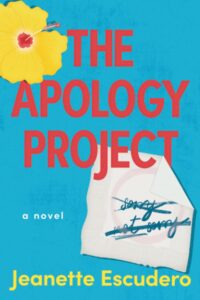 Amelia wakes up in his bed accompanied by a severe hangover and a list she’s made of people she wants to apologize to. Hence, the apology project begins. At first, she resists. After all, she wasn’t in her right mind when she made the list, and a sober(ish) morning-after look shows some people on the list should apologize to her not the other way around. Gradually, Amelia starts to give it a try. In the process, she learns the difference between who she thought she had to be and who she wants to be.

I wasn’t sure what to expect when I received my ARC (advanced readers copy) of The Apology Project by Jeanette Escudero because the premise of this novel is so unique, and its genre difficult to categorize. Once I started to dig in, I was struck by the powerful questions this novel unearths. Should we judge people by their exterior traits or give them a chance? Why is a woman labeled a bitch if they have a forceful work personality, when a man wouldn’t be labeled at all or would be praised for his aggressiveness? And, is it really possible for only one person to be at fault when a relationship breaks down?

The Apology Project has layers and layers of depth, which makes it a perfect book club read. Not only that, the prose is charming, insightful, and real. Curious to learn more? Join me on Tuesday, August 24 at 2pm EST to watch my live Facebook interview with the author. 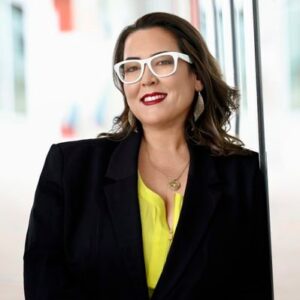 Jeanette Escudero, the child of Cuban immigrants, was born and raised in Miami. She worked as an attorney before turning to writing fiction. Being published fulfilled a dream and gave her an outlet for her imaginative, romantic side. Writing under the pseudonym Sidney Halston, she is a USA Today bestselling author of multiple romance series. As Jeanette Escudero, she writes about flawed and relatable women.

She is fluent in Spanish and works as an employment law attorney who consults with companies to combat sexism, harassment, and discrimination in the workplace. Jeanette lives in South Florida with her husband and her three children, in whom she’s instilled a love of nature and appreciation for the planet.