In Carol Goodman’s latest The Night Visitors, Alice and Oren are on the run. They’re fleeing to Sanctuary, a secret harbor for victims of domestic abuse. Mattie, an older woman with a sympathetic nature, meets them at a bus station and is meant to bring them directly to the safe house, but bad weather gets in their way. Instead of following protocol, she takes them to her home. Things become more and more complicated as the past, present, and future collide to create a violent storm, echoing the blizzard that traps them in Mattie’s old Victorian.

The author deftly unravels the complicated strands of her character’s history, giving this novel a thrilling pace. It is filled with drama, violence, and plenty of dramatic tension, but also understanding, kindness, and hope. The Night Visitors is part thriller, part literary fiction, and part documentary. Book Club Babble is so pleased to chat with Goodman about her genre-crossing novel!

Amy M. Hawes: How does The Night Visitors demonstrate the complicated nature of abusive relationships and how their implications extend well beyond the abused, touching everything and everyone around them?

Carol Goodman: I begin with two central characters, Alice and Oren, who are fleeing an abusive man—Oren’s father.  In addition to being fearful and anxious, Alice clearly has difficulty trusting anyone. Oren, on the other hand, tries hard to make connections and please the adults around him. I wanted to show how the experience of abuse manifests in different ways depending on the individual, their age, and their circumstances. It not only affects them but influences how people they encounter react and perceive them. As we get to know Mattie, we begin to realize that she, too, has suffered trauma in her past. She’s still coping with the sequelae of that trauma many years later. The fact is that many people around us may have experienced, or still are experiencing, abuse and trauma that shapes their behavior and our reactions to them. My hope is that if we understand that we can all be more compassionate of each other.

AH: Alice loves Oren in her own way but is plagued by deep insecurity, making it difficult for her to be consistently nurturing. Would you qualify some of her actions as emotional abuse?

CG: I think Alice is doing the best that she can for Oren given her own limited resources and her own history. 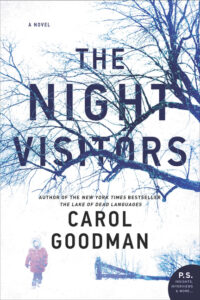 She’s not perfect, and she speaks harshly to him and at one point accidentally hurts him. I don’t think that her behavior has turned into emotional abuse yet, but it could if she doesn’t get help and learn to deal with the effects of her own history.

AH: Mattie lets her conscience guide her when it comes to breaking or keeping the rules of engagement outlined by the women’s shelter. I like this aspect of her personality. What compels her to decide for herself what is right and wrong?

CG: First and foremost, Mattie is a compassionate person who will always put people first before rules and protocol. This doesn’t mean that she’ll always do the right thing, but she will always do the compassionate thing. One of the reasons I think she might err in this direction is that she was raised by a strict, rule-bound judge. In following “the rules,” her father did something that ultimately had disastrous consequences for Mattie. I think this experience gives Mattie a healthy distrust for following the rules, especially when it gets in the way of following her heart.

AH: There are many plot turns in your novel. Did you map them ahead of time or did they reveal themselves along the way?

CG: I had worked out some of them, but I know that at least one of the major plot turns took me totally by surprise. It came out of being immersed in the characters and suddenly realizing what one of them was going to do. I love when that happens because I figure that if I can surprise myself I may well surprise my reader.

AH: You did a lot of research for this book. What did you learn that surprised you the most?

CG: First of all, this was one of the most unusual research experiences for me because it involved doing a 60-hour training course for working the crisis hotline at Family of Woodstock. When I began the training I was surprised to learn the extent of the services they offered. In addition to the crisis hotline, they run a domestic violence shelter, a homeless shelter, another shelter for families, a youth house for teenagers who can’t be in their homes, several homes for teenagers who have aged out of the foster system, and counseling for a myriad of issues. In each of these facilities, there are caring people trying to make a difference in the lives of vulnerable people. I don’t know if “surprised” is the right word for how I felt, more like amazed and awed. It made me both aware of all the suffering and uncertainty in the world and in the humanity of the people trying to make a difference.

AH: Where did the inspiration to include supernatural aspects come from? Have readers commented on this inclusion, and if so, what do they think?

CG: Yes, people have! Mostly favorably, I think, although I’m always aware that the presence of the supernatural might be a “deal breaker” for some. I love ghost stories, and I’ve had a ghost or two in my books before. I think I just knew right from the start that Mattie was haunted by her past and that in her case that haunting might be a little more “real” than for others. It might have also had something to do with where I got Mattie’s name—I saw it on a gravestone in the Woodstock Cemetery.

AH: How do you know when an idea is ready to become a book? What was it like for the idea that became The Night Visitors?

CG: Usually, it takes a few different ideas to come together to form into a book. For The Night Visitors, though, the initial idea—woman and boy on the road fleeing an abusive situation—came very quickly to me and then when I found out about Family and decided to volunteer there I knew that one of the characters would be somebody who worked there. Some books require more finessing in the planning stage, where I might keep tinkering with the initial idea until I’ve got it in the right place before I start writing. For this book, though, I was instantly seized with the idea and began writing pretty soon after the initial idea came to me.  I was a third through with the book before I began doing my training at Family and nearly done by the time I began working there.

CAROL GOODMAN graduated from Vassar College, where she majored in Latin. After teaching Latin for several years, she studied for an MFA in Fiction. She is the author of twenty novels, including The Lake of Dead Languages and The Seduction of Water, which won the 2003 Hammett Prize. Her 2017 thriller The Widow’s House won the Mary Higgins Clark Award. Her books have been translated into sixteen languages. She lives in the Hudson Valley with her family and teaches writing and literature at The New School and SUNY New Paltz.