Carl Vonderau’s serial killer thriller, Murderabilia, stays with you long after you’ve read it. It’s not only about hunting a serial murderer on the loose, which is certainly a large part of the plot. In addition, the novel largely deals with another incarcerated serial killer’s children who grow up, try to forget the past, change their names, and do their best to have normal lives. All the while, they pretend as if their serial killer father (who is locked up in prison for the duration of the novel) does not exist.

But we all know that you can’t just sweep past trauma under the rug and forget about it, because the universe conspires to force you to face it. And that is largely what happens here. 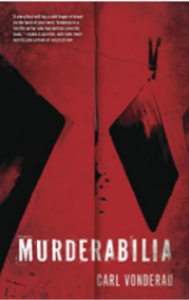 The title Murderabilia comes from a term used in the novel, which refers to the souvenirs that deranged fans of serial killers seek, such as T-shirts and other mementos. These fans are, for some reason or other, enamored with these psychopathic but typically highly intelligent perpetrators (Ted Bundy comes to mind here).

The novel opens by demonstrating to the reader the seemingly happy life that the protagonist, William McNary, and his sister, Polly, have built in the wake of their father’s discovery and conviction for multiple homicides. Their father, Harvey Dean Kogan, known as The Preying Hands, is incarcerated for multiple homicides of women.

William is now married with two children, and his sister Polly runs a successful restaurant. However, the fear of discovery constantly lurks in the backs of their minds. They are petrified that people will find out who their father is and will assume the worst of his children.

This fear turns into reality when William receives communications from someone who claims to know exactly who William’s father is, and who even claims to be William’s brother. Then, all of a sudden, women in the area end up being murdered by someone who appears to be copying Harvey Dean Kogan’s modus operandi.

In essence, then, Murderabilia becomes both a hunt for a serial killer, and a hunt for the person who knows William’s identity. Are they indeed the same individual?

And when the police suspect William of the current murders, he must prove his innocence so that he can find the person who is stalking his family. And that means talking to his imprisoned father to find out what he knows. Whether Harvey will help the police and his own son catch a killer is anyone’s guess. The author does an excellent job of conveying Harvey’s depravity to the reader. Be warned that the novel contains descriptions of fictional crimes, which are not for the faint of heart.

One of the most interesting takes of the novel was dealing with what happens AFTER a killer is caught. Here, Harvey Dean Kogan’s children and former wife move on as best they can, and avoid these murderabilia seekers like the plague, crazy people who try to find the killer’s family in order to have some connection with the murderer with whom they are so captivated.

For those of us who watch a lot of true crime shows, we know that very few documentaries deal with the aftermath, i.e. what happens to a killer’s family and how they deal with public outrage (how could you not have known? they think) and ostracism (“his kids must be crazy too, it must be genetic,” they say). And here, William, Harvey’s son, also wonders whether he and his own son have the “serial killer gene.”

In summary, in addition to being an edge-of-your-seat catch-a-murderer thriller, Murderabilia also explores the psychology of serial killers and of the innocent family members who are left picking up the pieces and wondering how they could not have foreseen such terrible crimes.