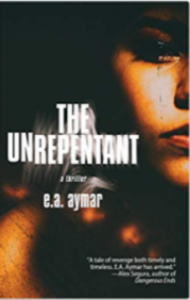 The Unrepentant is the latest thriller by E.A. Aymar (2019), and it is a great choice for a book club read. You can read my review of the book here. It posits several questions about the most basic primal instincts of human nature, including survival and revenge. Told in a fast-paced narrative, the novel recounts the story of Charlotte, a young lady from an immigrant family who is abducted and forced into sexual trafficking. When her captors attempt to execute her, she is saved by military veteran Mace, a stranger, who puts his own family and friends at risk in aiding her. While Charlotte faces her past trauma and plots revenge, Mace faces his own demons in the form of depression.

This novel, which deals with sex trafficking, is not for the faint of heart. If you enjoy reading and watching true crime, and unpacking the psychological issues of psychopathy, then you will likely find this an engaging read. Charlotte’s heartbreaking ordeal is described in great detail, and I would not recommend this book for survivors of similar trauma unless your therapist has given you the go-ahead.

If you’re prepared to read a book that asks more questions than it answers, this novel would be a fantastic book club choice. It is certain to get your group talking!

Book Club Questions for The Unrepentant

You can purchase the book on Amazon here!